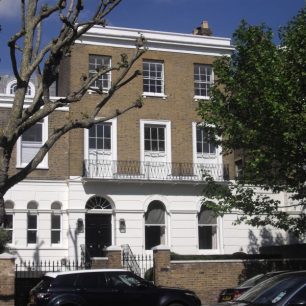 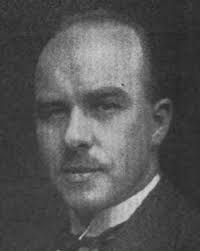 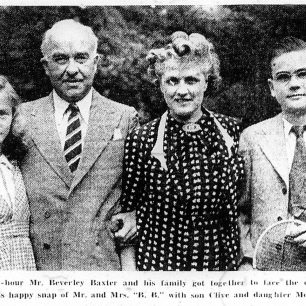 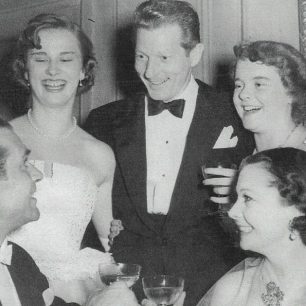 Sir Beverley Baxter  was a Canadian journalist who came to England to work for the Beaverbrook press, particularly the Daily Express,  and was eventually theatre critic of the Evening Standard. He was also a Conservative M.P. from1935  until his death in 1964.  This article was published in Macleans magazine in 1958.

All day long and into the night at this time of the year the logs chuckle and crackle as if Samuel Pickwick and his friends were due to arrive at any moment. When the company is good I have known a log nearly to split its sides with merriment.   It is true that we have a central heating system as well which seems to have difficulty in finding the centre. Thus it will ignore the drawing room where our guests have gathered before dinner but will achieve ninety degrees in the box room where we keep empty suitcases. But that is part of the charm of a hundred-and-fifty-year old house. Mere existence in it is an adventure.

“By selling our house we could save enough to buy it back again“   – every winter we decide to sell the house and move into a flat. By the time my wife gets through her financial calculations we have only to move into a flat and life’s problems are over. The savings would be so colossal that after a few years we would be able to buy a house in St. John’s Wood and start all over again.

Then just as we are all of one mind on the subject, the flowers suddenly begin to appear in our old-world garden— a little lonely and a little diffident but obstinately British in their defiance of the weather. Theirs is the right to be born again each springtime and they will not allow their immortality to be denied by sulking skies or cruel winds.  A fortnight later the sun relents and suddenly the giant pear tree in the garden bursts into blossom as if Romeo and Juliet were to be wedded there in the open air. It is such sheer enchantment that one looks at the radiant canopy of blossoms until one feels like crying with the poet, “O be less beautiful, or be less brief!”

What memories linger about this garden! During the blitz we used to sit there as the light began to fade and wait, with bombed-out friends who had found shelter in our house, for the nightly bombing raid. How punctual the Germans were! Just as twilight deepened to dusk we would hear the sirens in the distance like whining cats, growing in strength until by the time it reached us it was like the howling of a thousand maniacs. Then silence . . . complete silence. Five, six. or ten minutes without a sound except perhaps a solitary motor car rushing to cover. The very heart beat of London seemed to have stopped.

Far away, like the pizzicato notes of a bass violin we would hear the first sound of guns. Then louder and still louder and suddenly the guns in Hyde Park would blast the ears with noise while the German planes over us shrieked as they swooped and swerved and dived to avoid the instrument-directed gunfire.  Richard Wagner would have gone mad with delight at the orchestral magnificence of the blitz. When the Germans drew off each night and the sirens sounded the chilled monotone to say that all was clear there was a curious anti climax that affected us all.

One night a bomb fell in our neighborhood with the odd result that, although it was a quarter of a mile away, the vibration caused a partial collapse of the garden wall between our house and the one next door. Next day my neighbor crossed the street and posted a letter addressed to me. Eventually it arrived, its purpose being that he and I might meet and discuss the necessary repair of the wall. We had never been in each other’s house—but that is London. One has friends and acquaintances, but no neighbors.  However, on this occasion I called on him to discuss the matter and we became friends at once. Two years later he and his wife came to our place for lunch, which is what you might describe as impetuosity under control. At any rate, in the process the ancient wall was duly restored, which is what really mattered.

The interesting thing is that St. John’s Wood has not only a definite personality but a highly developed community sense. There is the parish church just up the Terrace, with the names of the fallen dead of the 1914-18 war engraved in stone and a plaque for those who did not return from the Hitler war. But the winds and the rain have worn away the stone until those names that face the north and the east are almost indecipherable.

Opposite our house there used to live a little Scottish doctor who ministered to the sick and the aging. During the nights of the bombing I used to cross to his house and play three-handed bridge with him and his medical compatriot, Alexander Fleming. Fierce were the controversies and, before the night was out, many a sixpence changed hands.  But there was a twinkle in Fleming’s eye and a kindly smile when the sixpenny battles had ended for the night. He had good reason to be serene, for he gave penicillin to the world. One day a British government will become sufficiently enlightened to remove some of the statues of generals on horseback and erect memorials to men like Alexander Fleming for their victories in the war against pain and death.   While they are at it they might even take away the miserable stunted statue of William Shakespeare close to the public convenience in Leicester Square, and give him a position equal at least to some commander of armies who fought every war with the ideas of the war that had preceded it.

But let us return to Hamilton Terrace and speak of the house immediately north of the Baxter abode. It is ultramodern, having been built as recently as the 1920s, but we have confidence that the British climate will yet soften its attractive but regrettable brashness. Lady Peel (alias Beatrice Lillie) lived there for a time during the war, having married the baronet descendant of the great Sir Robert Peel.  She had brought the gift of laughter from Toronto to London in the 1914 war, but in the death struggle with Hitler’s maddened Germany she had a son who was a junior officer in the navy. One day the mighty German battleship Bismarck put to sea and HMS Hood, although outranged and outgunned, was one of the ships sent to intercept her.

It may have been superb German gunnery or just the malice of fortune, but the Hood was hit by a salvo and went gallantly to her death with every available gun firing.   Some survivors were picked up but young Peel was not among them. Beatrice Lillie who has made thousands cry with laughter now wept alone. Heartbreak house had come to St. John’s Wood.

One day in parliament in 1940 1 happened to mention to Anthony Eden that a few junior Canadian officers were coming to my house for a haphazard evening meal. Eden, who joined Churchill’s government, whipped out his engagement book and turned over the pages.  “Would you mind if 1 came up and met them for a few minutes?” he asked.

Never have I seen Eden happier than on that night in my house. He not only talked eagerly and entertainingly, but he listened with intense interest to what the Canadians had to say. He too had a son who trained as a pilot in western Canada and went to his death in action against the enemy.

But you must not think that we people of St. John’s Wood only fight battles in retrospect. Six months ago I was elected president of the St. John’s Wood Society whose purpose is to prevent vandal hands spoiling the character of our district. Believe me, there is such a growing resentment going on that any day now I shall reluctantly be forced by my society to head a procession to the town hall of the borough and hang the aldermen and the councillors, to say nothing of the mayor.

I must explain that St. John’s Wood is part of the borough of St. Marylebone. which includes such historic spots as Madame Tussaud’s wax works, part of Regent’s Park and the alleged house of Sherlock Holmes.  Other local councils in London have recently adopted a most hideous new street lamp and now the wicked mayor and council of St. Marylebone are threatening to accept this new-fangled lighting and force it on St. John’s Wood.  The wretched lamp consists of a neck like a gigantic boa constrictor which rears its head high up into the sky and then bends it toward the ground. The light from its illuminated face is a horrible gleaming yellow and the whole effect is hideous and snakelike beyond belief.

The foolish aldermen and councillors contend that it will lower the number of street accidents. The proud answer of the St. John’s Wood Society is that it would be better to die than live in such glaring ugliness. My committee aides keep me fully informed of everything and I give them my blessing. But if you read some time that riots have broken out in Marylebone and the militia has been called up, you will know that it is our society of preservers at work. It is the only chance of a monument in my honor but 1 wish that the Boadicea who is the chief organizer of this campaign would find someone with more martyr’s blood in his veins to lead them.

Tomorrow there will be more flowers in the garden awakening from their long, long sleep. Soon 1 shall be able to sit in the sun and listen to that distant shout from Lord’s cricket ground as England scores another run. We might be in the heart of the country once the summer is really come. My daughter is having some trouble at the piano with Mozart. They cannot both be right and my money is on Mozart. The cat has just seen a fallen petal move in the breeze and its worst suspicions are aroused.

1 don’t think we shall leave St. John’s Wood yet awhile. ★