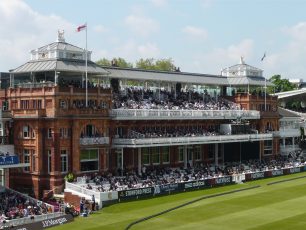 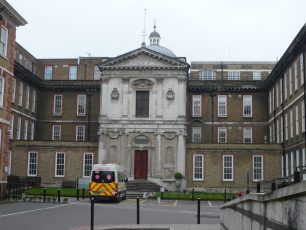 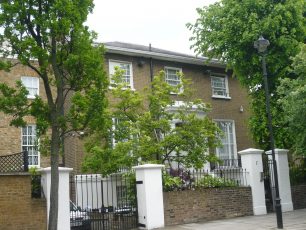 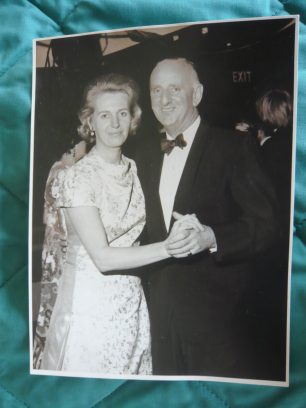 Polly and Brian Johnston in the 1960s
Louise Brodie 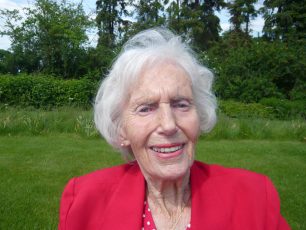 In 1948 I got married to my husband Brian Johnston. We had had a whirlwind courtship which lasted only one month! When we were planning my wedding day my mother wanted a June wedding but Brian said, “Oh no that’s the cricket season.” So we married in April and I went house hunting with a special order – to find somewhere within walking distance of Lord’s cricket ground.

I was very lucky and we bought a very nice detached house in Cavendish Avenue, which leads directly to the back of Lord’s.  There was a small garden facing a row of pleasant houses in Wellington Road. These were later demolished and Embassy Court was built on the site. Over the back wall was a huge open funnel which belched smoke from the trains passing underneath from Marylebone station. The result of this was that the house was always dusty and my children’s nappies smelt of smoke hanging on the line! I was glad when it was filled in.

We had interesting neighbours there. Two doors away was Joan Cross, a famous opera singer. Opposite was a QC called Platts-Mills with four sons and in the Close next to the wall of Lord’s was Dame Myra Hess, a very famous pianist.

Brian’s work of course often took him to Lord’s where the commentary box was simply a cubby hole at the top of the pavilion. The children first went to Mrs. McCaffreys school in Loudon road. We used to visit Regents Park, which hasn’t changed. The children loved the boating lake and tennis courts. We went to the Zoo as well.  We attended St John’s church on the roundabout where Noel Perry-Gore was the backbone of St John’s Wood life for years. The de Walden rooms in Allitsen Road were used as church function rooms. La Casalinga was the family restaurant.

Every now and then one of the children would get a cut knee or a bang on the head and I would take them to the outpatients department at the hospital of St John and Elizabeth opposite. It was run by nuns in those days, so it was quite daunting to see so many dressed in their gowns and white headwear – but they were kindness itself and calmed the children’s fears.

I remember from my wartime days that a bomb had dropped on a block of flats between the underground station and the corner of Circus Road and Wellington Road, blowing out all the windows in Wellington Court. When we arrived this was an open space. We had a bonfire there on Guy Fawkes night. The new Post Office was built on the corner.

Opposite the post office was a large old shop called Bents, a drapery and children’s toy department store. Old Mrs Bent, a large lady, and her equally large son, ran it just as it had been in Edwardian days, with a pulley running from end to end of the shop taking cash in a small box, by pulling a handle, to the cashier. The children loved watching it.

On the other side of the road was a small row of shops with the grocer, Sullens, run by husband and wife. Those days we were still rationed for sugar and some dairy products but Mrs Sullen always gave me a bit extra if she could. Although I only lived round the corner they would deliver to me two or three time a week. I just rang up in the morning. They were real Londoners, the salt of the earth. Most of the shops were run by Londoners, not like now. We used to know all the stallholders in Church Street too.

Just after the war many of the shops still had boarded up windows to protect them from bomb blasts, so it was a bit eerie. Our particular friends were Mr and Mrs Cham, who ran a shoe repair shop and loved a gossip; Babyland had been there for years; Carters was the electrical shop and Elven Mains, the radio and TV shop, run by two sisters.

For the Queen’s Coronation we held a street party in the road, which was closed off at both ends. We had great fun, with donkey rides, stalls, balloons and children’s games. There were 23 children in the road. Dame Myra Hess and Woodrow Wyatt joined in.

I wish that wonderful atmosphere could still happen these days. It was villagey then and I feel very lucky to have lived in St John’s Wood.

in conversation with Louise Brodie