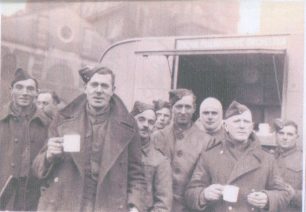 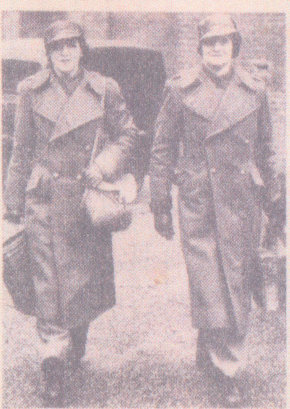 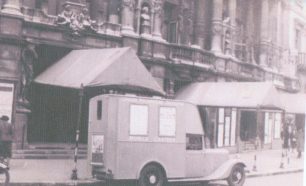 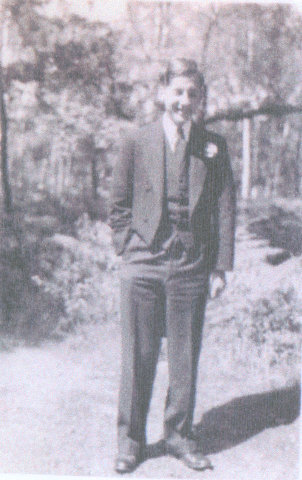 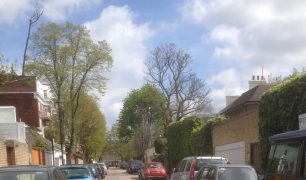 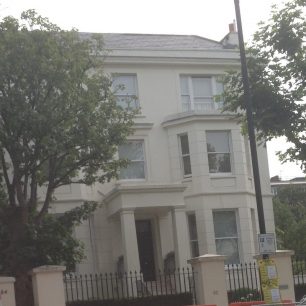 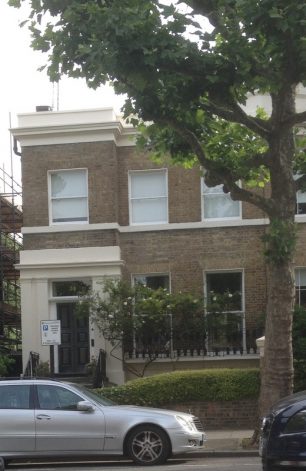 I was born in 1933 while my family were living at 44 Marlborough Hill. Before the war, the east side of the street was lined with villas.  Ours had a garden at the rear with trees at the end under which ran the railway out of Marylebone.  The main living room, which served also as my mother’s (opera singer Dora Labette) music room, had a large bay window.  We were burgled twice within twenty-four hours, which shows that crime is no new feature in our area.  I remember my mother telling me that, after the first break-in she was assured by the local bobby that ours was the safest house in London; yet, within a few hours the burglars came back and took what they couldn’t manage to take away the first time round.  I think I was too young to have any appreciation of these events.

When I was old enough, I went to the Montessori school on the Finchley Road. I believe it was on the corner of Alexandra Road.  I think the only thing I learnt there was to do two things at once; a boon in later years when I was able to study my law-books and enjoy concerts on the radio at the same time.

We moved to Hampstead Garden Suburb in 1939, where my mother started doing air-raid precaution work. She became friendly with Connie, who became my adopted aunt, and together they learnt during the days of the phoney war how to deal with the corpses and bits of corpses that were going to litter London during the expected air raids, how to do fire-fighting work and later, to collect samples of water from the pumping stations in and around London in case the water might become contaminated by enemy poisoning.

From 1940 on they also ran a mobile canteen for the benefit of the London Philharmonic Orchestra, touring the bomb-sites of London, ministering tea and refreshment to the firefighters.

They were on duty at Queens’ Hall the day following the destruction of that wonderful hall by enemy bombs.  When I was not at school I used to be taken round on some of these expeditions, which I found exciting but I was too young to have any understanding at all of the ghastly damage and loss of life.

Our house in the suburb was requisitioned by the War Office because it was close to the anti-aircraft guns on the golf course off Winnington Road, so we moved first to North Gate in St John’s Wood where Connie’s family had a ground floor flat.  In the evenings we used to listen to broadcasts on the radio of the national anthems of all countries fighting Hitler, and, unpatriotically, the Greek one became top of the pops for me.  One day Connie said she had a premonition of disaster and we all moved out in a hurry.  That night North Gate was hit by a bomb which entirely demolished the flat.

After that, in about 1942, we went to live at 8 Neville Court in Abbey Road, though I was away at boarding school in Shropshire most of the time. Part of the time however I was a day boy at Arnold House which later was evacuated (in part only) to join my boarding school away from the bombs.  I remember my grandmother taking me shopping often to Circus Road and the High Street.  I was particularly taken with the bacon slicer at the grocers on the north side of Circus Road (Cullens?) and also with the exotic Salamones’ greengrocery in the High Street – exotic because my grandmother assured me with characteristic lack of political correctness they were gypsies.  Were they, I wonder? I remember also the fish shop opposite. We had quite a lot of fish because of course meat was rationed. I remember too the old Barclays Bank, on the site of the present one but a much older building.  My mother kept her account there until she died in 1984. Sometimes too we went to Nugent Terrace where I think we bought our bread.

Towards the end of the war I learnt to ride a bicycle.  At that time there were very few cars indeed on the road, and no traffic lights that I can remember except at Finchley Road.  This meant that one could zoom around almost regardless of traffic and enjoy exploring the Wood from a bike.  It was at this time that I became friendly with Christopher Morris, the son of the vicar of St Mark’s at that time, and we sometimes joined in the water-sampling expeditions, which took us to such remote spots as Staines and Bromley.  Christopher and I cycled together a lot.

My mother and Connie became Air Raid wardens and at night would patrol the vicinity of Neville Court in tin hats and gas masks, including the service road at the rear, (which they christened Mrs Perrett’s Passage after the caretaker who lived there). Their beat was also supposed to include the then Baptists church on Abbey Road, but my mother said she wasn’t going to risk her neck to save such an eyesore (in her opinion) if it was hit. When the flying bombs came, we moved out of London temporarily to stay with friends in Byfleet.  The first night we were there, a bomb landed nearby and the ceiling of my room fell in on top of me.  So we moved further into the country for many years.

In 1951 my schooling finished and I was articled to Arthur Underwood, a solicitor (who later bought a house, since shamefully demolished, in Abercorn Mews backing on to the Heroes of Alma public house.) Because my family was living on the south coast I needed board and lodging in London during the week.  My mother’s old friend, Emmie Tillett, a very famous concert agent at that time, took me in.

She lived at 11 Elm Tree Road and I spent about six years there, while I finished my articles.  Her business involved her in a great deal of entertaining famous musicians, and I was somewhat awestruck to meet such celebrities as Kathleen Ferrier (whose painting sessions with Emmie on Sunday mornings I was sometimes able to join). Then there was Myra Hess, a near neighbour, who had an entourage of very butch ladies whom Emmie would do anything to keep at bay; Clifford Curzon, whom we had to rescue with the aid of the Foreign Office in the middle of the night from a railway siding in Boulogne because he had fallen asleep on his train from Austria; Solomon, the victim of a tragic stroke which left him incapacitated for thirty years, but whom Emmie would visit practically every Sunday evening for the rest of his life; Janet Baker, a protege and lifelong friend; Lotte Lehmann who was a talented painter as well as a great singer, and one of whose works Emmie hung on the wall of her dining room; Zolton Kodaly, whose impenetrable Hungarian had to be interpreted by a handy neighbour across the street, Cherkassky, who would not perform in London until he had come to Elm Tree Road to stroke Emmie’s cat; Benjamin Britten who said that he only kept the scores of Wagner’s operas in his house at Aldeburgh, “because that was where the death watch beetle lived”.

My father, Sir Thomas Beecham, also lived in the area on and off, but my mother and he had parted and he had remarried.  I never went to either of his two homes in the Wood, although he once came to Emmie’s for a rather uncomfortable dinner, at which I was so awestruck that I probably didn’t utter a word.

When I was qualified, it was time to have a place of my own, so in 1957 I moved out of the area to somewhere more affordable, but in 1962 I was able to buy a flat at 82 Hamilton Terrace, where I lived for 16 years.  It was a time when many of the houses in the street were being converted into flats, which meant that there was a good social mix of all sorts of different interesting people, many from the arts, broadcasting, music and the professions.

Jeanne and I were married in 1965 and in 1978 we moved to our present home at 34 Hamilton Terrace.  This was a period when properties in the Terrace were a great deal more affordable than they are today.  We were a real community.  Our near neighbours included Maggie Teyte, famous for her interpretations of French music (she was just as English as me, but her faux-French accent would have fooled most people); Gerald Moore, the father of the modern British accompanist school and whose raunchy jokes were a perpetual delight; Jessie Wood (long term companion of Sir Henry, who adopted the name “Lady” by deed poll because Sir Henry was unable to obtain a divorce from his real wife); Sir Charles and Lady Mackerras during the period in which Charles attained his pre-eminence as a conductor; Philip Jones (and his wife Ursula) the father of modern brass chamber music style; Michael Pennington the celebrated actor, the disgraced Lord Lambton and his wife Bindy; David West-Russell, sympathetic judge and President for rmany years of the St John’s Wood Society, and in the Close behind, Mervyn Horder, son of the Royal physician and no mean composer of songs.  Where, among the speculators and property-developers, are their likes today?