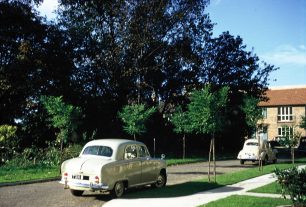 The trees and shrubs opposite the terrace 1958
Bridget Clarke 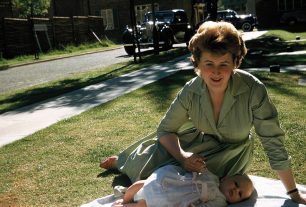 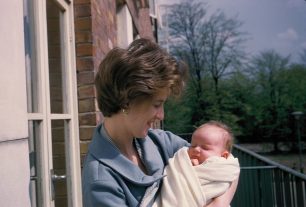 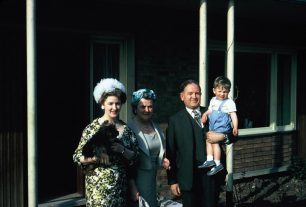 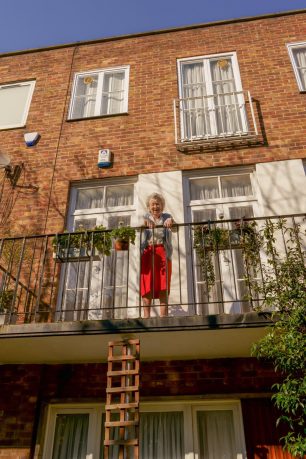 In March 1958 we moved into  the central house in a  terrace of seven in Middle Field, built on a site that had once been part of the Eyre estate at its northernmost end. There had been large detached Victorian houses  facing the Finchley Road and when they were demolished after the war the land was sold to the St John’s Wood Park Investment company, who had appointed T.P Bennett as architect. Three large pear trees from the original gardens were preserved though only one remains in 2012.

Our house cost £8,750,  £700 less than the others because it was the only one without a garage and we had to build one later. The ground rent was £95 p.a.  I think they were among the first houses built for private sale after the War, as most building energy had gone into replacing factories, schools, hospitals and council housing.  They were leasehold and subject to much the same rules as the Eyre estate – no clothes linen or other articles shall be exposed for drying in any garden or external part of any part or parcel of the said premises and it was only many years later that we were able to purchase the freehold.

For two years, until  a matching terrace was built, we had nothing in front of us but trees and flowering shrubs and all around were the overgrown gardens of abandoned or boarded up houses.  The leases of the houses in St Johns Wood Park  had fallen in during the war and had reverted to the Eyre estate  and it was a few years before they were cleared and all the flats at Walsingham and Sheringham built plus new detached houses in St Johns Wood Park.

Quintin Kynaston school had opened in 1956, and the Finchley Road was in the process of being widened; Boydell Court was already there, having been built for council flats but they had proved too expensive so were sold to private buyers. At Swiss Cottage the library and swimming pool were yet to be constructed and there was still a church on thar site.

The first morning after we moved in we heard the Kings Troop ride by on their morning exercise and knew we were living somewhere special.   It all seemed very rural for Central London, particularly as our telephone exchange was Primrose, and the dawn chorus when you could hear the birds singing to each other all round the district was amazing.

We thought our house was delightfully modern, with two bathrooms, (one pink and aquamarine, the other coffee and cream colour with crimson tiles in front of the bath) and central heating which was worked by a coke boiler that had to be fed twice a day in a little boiler house which was in the house but accessed through the garden.

Open fires were no longer permitted in houses but no-one had been able to imagine a drawing room without a fireplace  so there was a mantelpiece but no actual fire or chimney.

Our house had been the show house so was already decorated in what now seems rather bright Dulux colours – mustard yellow doors in the hall and landings and  a  turquoise ceiling in the hall – but then was very excitingly “contemporary”.  The radiators had a new feature – a wooden surround which matched the skirting board – and we had parquet floors of sapele wood.

The seven houses were lived in by six English families and one Norwegian, as their house belonged to the Norwegian Embassy. My parents in their early fifties were the oldest owners and my brother and I the oldest children at 17 and 23, while  other couples were in their twenties and thirties with small children or babies; there was one relatively famous young couple –Mike and Anne Hall, he was the son of Henry Hall the band leader and she was Anne Rogers, the original star of the Boy Friend.

Five of the houses had  children or babies (who sat outside in their prams every day)  and there were  five dogs –a Labrador,  a poodle, a Pekingese, a Yorkshire terrier and an Airedale. The houses with children mainly had au pairs from the continent, though one family had a proper Nanny, and nearly everyone had a “daily”, for although the Clean Air act had been passed there still was a lot of dirt and dust flying around.  There were no freezers or washing up machines, fridges  had to be defrosted every week and ovens cleaned.  Twin tub washing machines did exist but one still had to put the clothes through a mangle as they were transferred from the washing section to the spin dryer.

The place seems in retrospect to have been a hive of activity. We had three posts a day – morning, late morning and afternoon (though it soon went down to two), the milkman came daily to the back door, as did the dustmen twice a week, every house had a different laundry arriving to deliver and collect, and some had University Tailors picking up the husbands’ suits for cleaning. Harrods and Selfridges vans appeared weekly, as did the Times Library from Wigmore Street. Doctors visited their patients and paper boys delivered daily newspapers to every house and there were regular window cleaners. Greengrocer’s boys delivered goods on bicycles, and we had Mr Grey the butcher in Abbey Road sending meat two or three times a week via his delivery man who knew everyone in the district.  Miss Grey, who used to sit in a glass box in the shop would ring every few days to take orders and suggest different cuts of meat.  Cars were put away in garages and not left for long in front of the houses.  St Johns Wood High street was still like a village street, with shoe menders working in view, a wonderfully useful shop called Carters which could supply plumbers or glaziers, mend Hoovers and provide all sorts of hardware, and haberdashers selling reels of cotton. There was only one café for a cup of tea and a pastry, Leslie’s, near the southern end of the street, and no-one ever sat outside on the pavement or drank out of a bottle of water in the street.

Because we all moved in during the space of a few weeks we made friends with our neighbours quickly. With the end of rationing and plentiful food it was a time when everyone was trying out Cordon Bleu recipes and I remember a lovely supper my friend at No 3 cooked following her Constance Spry recipe book, of poached salmon – still a delicacy then only available in June – and hollandaise sauce. All the 50s and 60s favourites like prawn cocktails, grapefruit baked in the oven with brown sugar, quiche lorraine, sole veronique and chocolate mousse were in their  dinner party heyday. If you wanted to eat them you had to cook them yourself as there were no ready meals. It was a formal world and most of the husbands in Middle Field left for the city wearing bowler hats and the wives wore hats and gloves when they went out but it was a friendly world too.Some of us went together to cookery classes and also learned how to make professional curtains and lampshades at local adult education classes and we are still happily in contact fifty years later.