You are here: Home>Memories>Mansion Blocks>Scott Ellis Gardens & the Barracks- the Symonds family 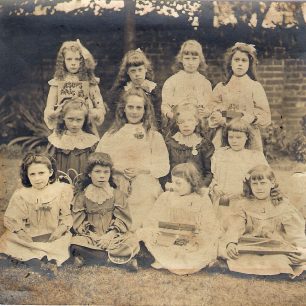 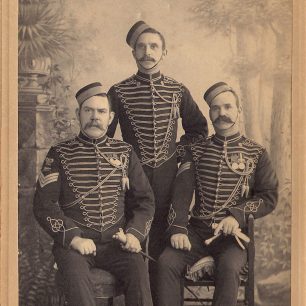 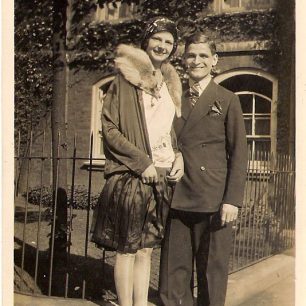 My parents outside Scott Ellis Gardens 1931

My grandmother, Gertrude Lily Symonds, was born 8 September 1892 at Woolwich. Her father John was in the Royal Horse Artillery and he was discharged in 1896. The family moved to St John’s Wood Barracks where he became Canteen Steward. Grandmother remembered that the all children had military style coats and hats. Their mother blew a whistle to call them and they marched in. The children delighted in being the only children allowed in the barracks.

Gertrude, my grandmother, went to school at Barrow Hill Road School. Evelyn Redman was in her class, which was how she came to meet Frank Redman. He was a choirboy at St John’s Wood Chapel [now St John’s Church]. According to a Post Office Directory, Frank’s parents had a fancy draper’s shop in Charlbert Street, St John’s Wood from 1924 to 1928.

My grandparents were living with her parents in Aquila Street when my mother was born in 1911. They moved to 278 Scott Ellis Gardens in 1913 where Reg, her only sibling, was born. The family also lived at 272 as I have cards addressed to them there, including the official one informing my grandmother that her husband had been taken to hospital in Bradford, having been wounded in 1918. They ended up in 273, which is the flat that I remember. It seems that when the flats were decorated they moved to another flat. It was their choice as to whether they moved back.  Going in the front door of 273 the bedroom was on the right. To the left a short corridor led to the living room. Straight ahead at the end was the coalbunker. Just before that was the toilet and before that the little kitchen.

My mother, Ida, was baptised at All Saint’s Church. Her Aunts, Elsie and Olive Symonds, took her to Sunday school there. After Sunday school, even when little, she and her brother were taken to a Mr and Mrs Paul (to collect pocket money) then to Grandma and Grandad Redman at 10 Woronzow Road, and then back home for lunch. From the age of nine she attended the Baptist Chapel, where there something going on every evening for the children. She joined the Band of Hope. She started school at Capland Street School when she was six years old. It took less than ten minutes to walk to school. All the schools were at Capland Street so when she went to secondary school at eleven it was just a case of going upstairs.

My father’s cousin Nellie Ledger also lived in Scott Ellis Gardens. She introduced him to my mother. My parents married in 1935 at St Mark’s Church, Hamilton Terrace. They moved out to Whetstone, N20. I was born in 1939. All through the war until I went to school my mother took me to visit my grandparents alternate Wednesdays. We used four buses to get there or we could go by tube to Baker Street Station. During the war my grandmother spent many nights underground at St John’s Wood Station.