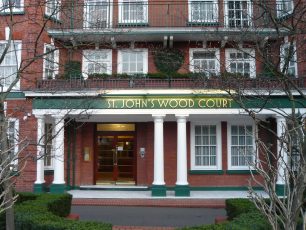 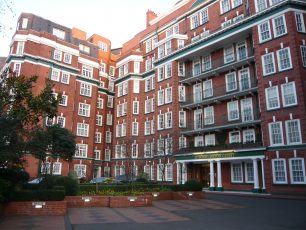 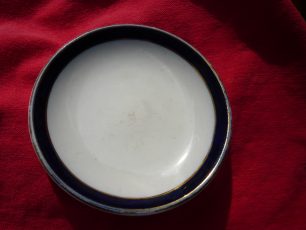 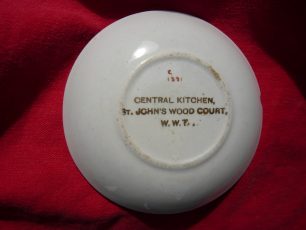 In her book “Cottages and Villas” Mireille Gallinou has given us a case study of this plot of land on the corner of St John’s Wood Road and Lisson Grove.

In 1733 the Eyre estate’s survey shows that the land was still fields bounded by a lane, no roads. By 1817 the estate had leased the land to Richard Todd who built two houses set right back on the property.

In 1883 a substantial studio has appeared on the plans. The lessee between 1889 and 1892 was the painter Arthur Tomson. However in 1895, it is apparent that the house has been pulled down and rebuilt, for W T Thorn.

In 1914 Abraham Davis had an agreement with the Eyre estate for erecting blocks of flats on the property. He was previously responsible for building flats in other areas as well as St John’s Wood.

Residents began to move into St John’s Wood Court in 1921. There used to be kitchens and dining rooms on the top floor, and the flats were said to be attractive to single professional women.

The butterdish in the photographs is eight and a half centimetres in diameter. It has a navy rim with two gold stripes. On the back it says “CENTRAL KITCHEN, ST. JOHN’S WOOD COURT, W.W.7” in gold lettering with “c.1881” in red. It was found by Hamilton Morrin at the bottom of one of the lift shafts.

The dining rooms were later turned into private flats, and penthouses were built on the top of the block during the 1990s.

Details and plans of this plot and its buildings can be found in “Cottages and Villas, The Birth of the Garden Suburb” by Mireille Gallinou, published by Yale University Press