You are here: Home>Amenities>Schools and Playgrounds>St John's Wood Terrace - a 1960s childhood 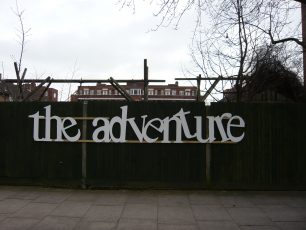 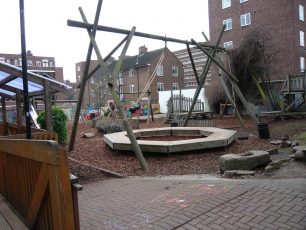 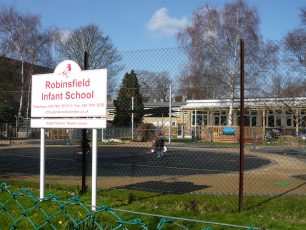 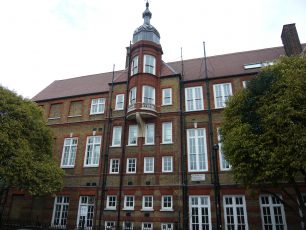 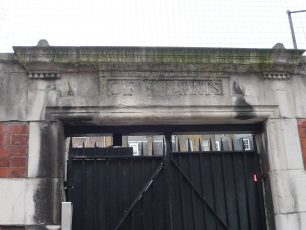 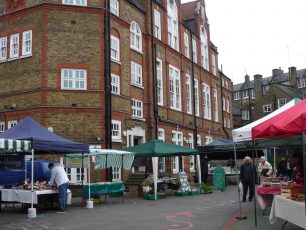 I must have started going to the Adventure Playground in St John’s Wood Terrace when I was about 3 or 4, in 1966 or 7, I have a feeling that I did a couple of ‘academic’ years there before starting in the infants section at Robinsfield.

There was children’s playgroup in the mornings, I assume, because I have clear memories of ‘The Wheels on the Bus’, ‘Incey Wincey Spider’ and’ I Hear Thunder’, as well as painting and drinking orange squash. None of it matched up, however, to the incredible fun and thrill of being allowed out to play in the Adventure Playground and see what the big children had built since the week or apparently the day before.

Fantastic structures, unbelievably dangerous, in retrospect I can’t imagine how it was allowed, thank Goodness it was. One that sticks most firmly in my memory is a large wooden structure, a cube of about 3 x 3 x 3 metres (even allowing for my small stature making it seem larger) filled with large off cuts of foam rubber into which one dived from a platform, and then squirmed out through a tiny hole near the bottom of one of the walls, and again, and again, and again. There were the inevitable zip wires and climbing frames and just bits of stuff, wood, nails, big beams, and rubble that we spent our time exploring. I was aware, subconsciously of the wide range of people who sent their children to the Adventure Playground, maybe there were no other playgroups at the time, I really don’t know. I was always amazed by a brother and sister who came with their own nanny in a uniform, the girl was allowed to wear trousers to be at the playground but always had a skirt over the top of them. I was hideously embarrassed once going back to their house for lunch, when the nanny suggested that I take off my trousers now that we were out of the playground, but of course I had failed to bring the necessary top skirt. We all longed to be part of the elite group of big children who went to the playground after school and built the fantastic structures.

I graduated from the Adventure Playground to Robinsfield Infants School which, conveniently for my mother, was exactly opposite our house, so she could watch me failing to integrate in the playground; actually she couldn’t do that until my seniority permitted me to move down from the upper playground to the lower one. The playgrounds were huge, you could run for miles, and when you got down to the big children’s playground there was a wonderful climbing frame which was a couple of horizontal telegraph poles on a concrete base making a perfect cowboy and Indian stage coach, and more often a gun carriage or a tank (yes, there were a lot of children from the King’s Troop in my class). The school hall was the centre of the building and I am immensely proud to really be part of the ‘Music and Movement’ generation.  My classmates and I spent lengthy periods of time being a tree and letting our branches grow or being a rabbit hopping around other trees. It still remains a point of reference with people my age.

When I moved inexorably from Robinsfield to Barrow Hill my father insisted on walking me to school on the way to catch his tube, the fact that he walked incredibly fast on very long spidery legs wasn’t a problem, even though I suffered from asthma, the really bad bit was that he was dressed in full John Steed attire,  pinstripe trousers, black jacket, bowler hat and shiny briefcase, not all right. I started by persuading him to leave me at the corner of Bridgeman Street and Allitsen Road, and finally managed to be allowed to walk to school on my own. I thought that it was because I told my parents that I met up with friends from school en route (true) but I suspect that it had more to do with my father needing to get into work earlier. Either way it meant that we could indulge in our favourite pastime of sticking lolly sticks into the parking metres along Charlbert Street to rack them up to the maximum time, always wondering why motorists hadn’t worked it out and why my mother wouldn’t do it when we parked on a meter elsewhere.

Barrow Hill was quite simply brilliant. I suppose that at that time state schools were actually funded and the facilities were astonishing. There were two full time music teachers and a full time drama teacher, a brass band, an orchestra and a school production of a musical ‘The Idea’ from which I still sometimes find myself humming songs. The G.L.C.[Greater London Council] still existed in those pre-Thatcher years and, therefore, London school children had the chance to go on regular theatre and concert trips. The school was, still is, a Victorian building, those horrible green tiles, with the classrooms opening off three central halls which were used for gym (those dreaded B.A.G.A.[British Amateur Gymnastic Awards] awards that I always failed), assembly, concerts, and, best of all, big art projects. I remember, in the fourth year, doing an enormous paper mosaic of a queen, something to do with the Byzantine period? Bizarrely, there was a swimming pool in the basement, tiny, very hot, where we went for swimming lessons which were hard work as there wasn’t really room in the pool to do more than one or two strokes.

My second year teacher was Mr Lloyd who I fear worried the parents as he was amazingly hairy, not that surprising as it was the early 70’s. His classroom was packed to the gills with animals, reptiles and fish of all sorts. We weren’t in the classroom much; possibly because of the smell, but spent what seemed to be all our time down by the canal in Regent’s Park pond dipping, (I don’t remember anyone falling in) or collecting flowers and branches and insects to take back to add to the collection in the classroom. The mice, Romeo and Juliet, had 14 babies on Valentine’s day. We found time to do projects on the Aztecs and the Incas, a trip to the, then, Museum of Ethnography, Cats, a trip to see the mummies at the British Museum and learn that butterflies smell with their feet as Mr Lloyd stamped around the classroom being said butterfly landing on things he did, and didn’t, like.

My third year teacher was Mrs Brownjohn, whose husband I believe was the poet Alan Brownjohn, whether or not this was the case, we always did the best assemblies with fantastic scripts and song lyrics that she brought in, she also got us all reading and writing poetry as if it were the most normal means of expression imaginable.

My fourth year teacher was Frank Flynn, less hairy, but just as brilliant, as Mr Lloyd, with the added advantage of wearing purple flares. He took us to France where we stayed with pen pals. We had been studying French, I seem to remember, with a French woman, I don’t know if she was a volunteer or paid, but the book was about Madame Souris et Nestor le facteur, and we learnt a song about a blackbird losing its feathers. Friends of my age, here in France where I now live, deny all knowledge of either the book or the song, so they must have been part of progressive 60’s British education systems.

My primary school education was quite simply excellent and I know that Barrow Hill has maintained that reputation and is one of the reasons that people choose to live in St John’s Wood to this day.