You are here: Home>Memories>Charlotte Halliday -Childhood in NW8

When we moved back to London after the War, I was given Beatrice Curtis Brown’s enchanting book Southwards from Swiss Cottage. The St John’s Wood of her childhood had changed remarkably little by 1946.

The High Street still had the traditional shops of Curtis Brown’s day : butchers, greengrocers, drapers or haberdashers – and a rather dreary one called ‘Modern Arts’ Most of our groceries were delivered by S R Brown on the corner of Charlbert Street. Milk was brought every morning by a horse and cart from the United Dairies near St John’s Wood station. We were thrilled by the story of the dairy being fire-bombed and the manager’s daughter rushing out in her nightie to rescue the horses. She opened the stable doors and urged them all to safety, but, come the dawn and the fire out, there was no sign of them. As the morning wore on they gradually returned – every horse having gone on its particular round, stopping at each house as usual.

Coming from a home in rural Bedfordshire and a co-ed prep school on Speyside, I had resented our move to Acacia Road and to the Francis Holland school, but at once I loved it all. I quickly made friends at school and with neighbours’ children and we played in and out of each other’s gardens.

Opposite to us in an early Victorian stucco house like ours lived the composer Roger Quilter and, in a neo-Georgian mansion, the Marquis of Tavistock. (After a year or so he became the Duke of Bedford and moved to somewhere rather bigger!). Our back garden abutted the much larger one of Duff House, where presently Bernard Miles set up the Mermaid Theatre.

To start with we had a car,  but it did not live on the street – my father garaged it somewhere in Wellington Road. After that it was shank’s pony and he would escort me to school gathering three or four neighbours ‘daughters for the walk to Baker Street, like a latter-day Pied Piper. My mother fetched me in the afternoon and we returned on a no 2 or no 13 bus: her fare was a penny half-penny , mine was a penny.  On 24th October 1947 we joined a crowd in Ordnance Hill to watch the arrival of King George V! at the Barracks. This was the historic day when he crossed through the word “Riding’ and replaced it with that of ‘King’s’  before ‘Troop’ in the Visitors’ Book.

My mother was a Fellow of the Zoological Society  and we usually went to lunch on a Sunday at the Fellows Restaurant. Here we joined Harold Knight and Dame Laura (who lived in Langford Place) and David Strang. David was a distinguished printer of etchings who had the studio in his late father’s house in Hamilton Terrace. If encouraged, he would tell how he once followed a fire engine and found himself at the Siege of Sidney Street in 1911 !

Fellows were encouraged to adopt an animal – David’s was a monkey and the Knights’ a hippo, and we would visit them in the afternoon with whatever was left over from lunch. I still have the drawing of some geese which Dame Laura did for me on the back of a menu.  The main dish of the day on 19 June 1949 is ‘Grilled Salmon Trout, cucumber, cauliflower and new potatoes, Maitre d’Hotel Butter – 3/9d’

But my father was on the look-out for a proper studio. We considered buying Maurice Greiffenhagen’s big rambling house in Loudoun Road where the American School stands today. Though I thought it romantic I was worried that our cat might get down on the railway lines from Marylebone which ran below the end of the garden (they were in fact fenced in) and was better pleased when  he found no 62 Hamilton Terrace instead, to which we moved in autumn 1949. 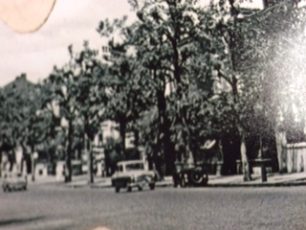 The Wood has given me a home for 60 years and a livelihood – and I am deeply grateful. I am stimulated to go out at all seasons to draw, paint, record  its great variety of architectural detail. Would it be unrecognisable to Beatrice Curtis Brown? Not quite.  She wrote ‘in springtime you could walk in St John’s Wood, however young you might be, with glory bursting inside you …from all about, behind the walls, rose the nostalgic smell of grass springing up from damp, sticky clay soil as the St John’s Wood gardens, steamy from the first warmth, took heart again’  It can still be like that.