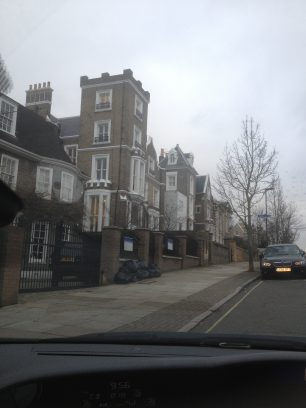 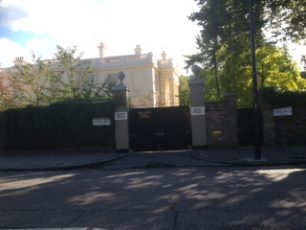 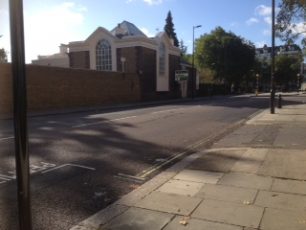 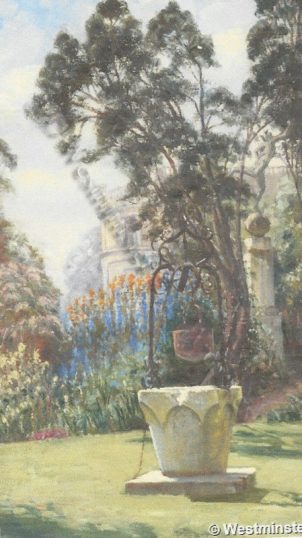 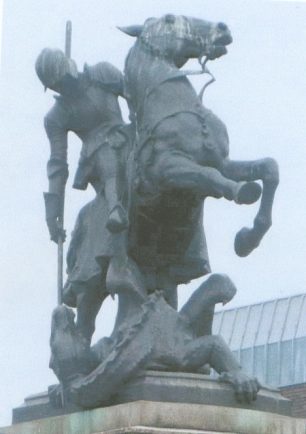 St George and the Dragon
Jacqueline Banerjee in w.w.w.victorianweb.org 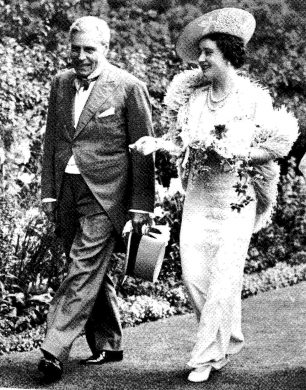 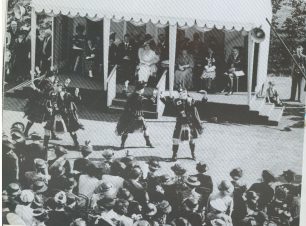 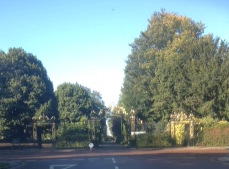 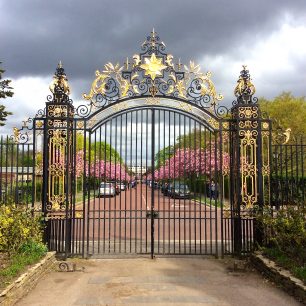 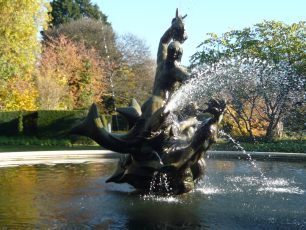 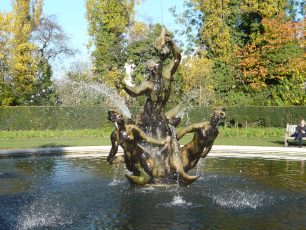 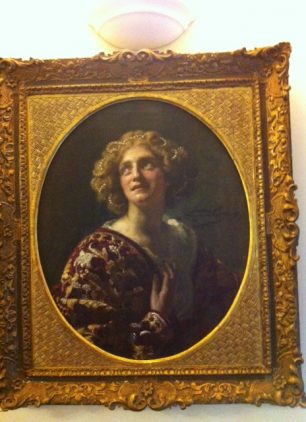 Mrs Gertrude Brown, nee Barber
with thanks to Robin Harrison, her grandson 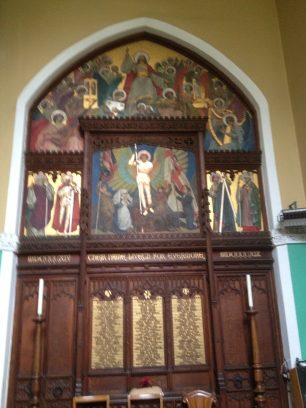 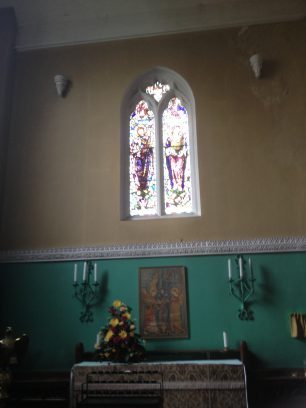 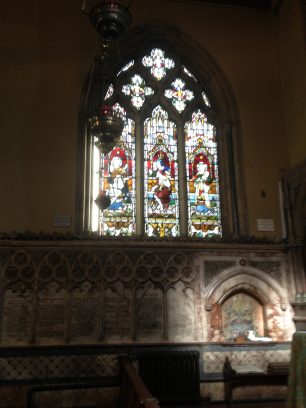 Sigismund Christian Hubert Goetze was a wealthy artist who painted in oil and watercolour; his subjects usually were landscapes or scenes from religious and mythological stories. He was born in Britain, his father James being a colonial broker of German ancestry, who had lived at 132 Maida Vale (formerly no 7 Kilburn Priory) but had moved to Upper Hamilton Terrace by 1861. Sigismund  first exhibited at the Royal Academy at the age of 22 and was an occasional teacher at the St John’s Wood Art School.  His parents worshipped at St Mark’s, Hamilton Terrace, where there is a window in their memory and Sigismund was christened there on 19 February 1868. The family lived at Hamilton Lodge, 86 Carlton Hill.

He lived at Grove House, from 1909 –1939; the house is a Greek Revival villa, built by Decimus Burton, in Regent’s Park, opposite St John’s Wood church. It has a circular entrance hall, a central pillared rotunda and a drawing room with a semi-circular portico. Goetze decorated the drawing room  with scenes from Ovid’s Metamorphoses and the hall with signs of the zodiac.

Grove House was the model for Rochester House in the novel New Arabian Nights by Robert Louis Stevenson. Sigismund’s sister, Violet,  left an annotated copy pointing out the similarities with Grove House (which has been kindly sent to us by her great nephew, Dan Cippico, the grandson of Violet’s sister, Angela Mond, nee Goetze)  It was a magnificent residence on the banks of the canal.  The large extent of the garden isolated it in an unusual degree from the annoyances of the neighbourhood. It seemed the parc aux serfs of some great nobleman or millionaire. Where the novel says the garden was so vast, Violet notes it was nearly five acres, very long and narrow. She wrote that the duel was fought in the rose garden and the grave must be placed just beyond, between the alcove in the wall of the postern gate. The rain fell heavily and the adventurers sheltered themselves below some pendant ivy says the novel, the whole place was overgrown with ivy in 1907, remarks Violet.

Some of the house obviously needed updating – a single candle burned in the great paved kitchen which was destitute of the customary furniture and as the party proceeded to ascend from thence by a flight of winding stairs, a prodigious noise of rats testified more plainly to the dilapidation of the house –  Violet, pithily, remarked the rats cleared out when new drains put in.   On a lighter note birds were piping in the shrubbery and on the forest trees of the garden in the book because, as Violet noted, it was a great breeding and nesting sanctuary.

He converted the stables of Grove House to a studio, which Montgomery Eyre said was one of the finest in the Wood, ranking next to that of Alma Tadema. William Reid Dick said he  was a man of exceptional culture.

He was also extremely generous; he donated the statue of St George  and the  Dragon (C L Hartwell), in 1936, which stands outside the  Church on the roundabout, which was converted to a war memorial later, bearing the message To the men and women of St Mary-le Bone who by their service and sacrifice for King and country freely played their part in both world war.

One hundred years after Regent’s Park first opened its gates to the public, an avenue of cherry trees was created on Chester Road, one of the the park roads that formed part of the original Nash design. The gates were donated by Goetze and the planting was begun thanks to his donation, too.  Prunus “Kansan” was chosen for the avenue, the flamboyant pink hybrid Japanese cherry that is synonymous with spring in the capital.

He designed the War Memorial for St Stephen’s, Avenue Road, which was moved to St Mark’s Hamilton Terrace when St Stephen was demolished.

He was a general benefactor to St John’s Wood, including Barrow Hill School, and St Marylebone Housing Association. He organised a petition for local residents who were annoyed by the reduced opening hours of the, then, Marlborough Road and Lords tube stations, in the 1930s.  His sister, Violet, who married businessman and politician Alfred Mond, [later Lord Melchett] was similarly involved in good works, turning her country home into a 60-bed convalescent hospital in the First War, and opening her London home to Belgian refugees.

After 1934, he  acquired the works of his lately deceased friend sculptor, Albert Gilbert (1854–1934) and presented them to museums and schools.  In 1938, he received a medal for distinguished services to sculpture from the Royal Society of British Sculptors.

After the First World War, Goetze painted a series of murals for the Foreign Office,  completing them in 1921.  Lord Curzon so disapproved of the nude women depicted that he refused to have them in the Foreign Office, and it took a Cabinet meeting, chaired by Prime Minister Lloyd George, to authorise them to be used. They now surround the Grand Staircase and depict the origin, education, development, expansion and triumph of the British Empire, leading up to the Covenant of the League of Nations.

The model for Britannia, Mrs Gertrude Brown, née Barber, (whose small daughter, Rosemary modelled Belgium carrying a broken sword in the murals) was also the subject of a painting by Goetze, in 1907. Before her marriage, in 1904, she had lodged at 84 Clifton Hill, and was listed in the 1901 census as ‘artist’s model’.

Some of his paintings in galleries include:

Till Death Us Do Part –  Walker Art Gallery, Liverpool

IN MEMORY OF SIGISMUND CHRISTIAN HUBERT GOETZE 1866/1939 PAINTER, LOVER OF THE ARTS AND BENEFACTOR OF THIS PARK

After his death, the  Goetze Memorial fountain, with triton and dryads, created by sculptor William McMillan R.A. (1887–1977) was placed in Regent’s Park.  At the entrance to London Zoo is a small statue of a boy on a bear  which was presented by his widow, in his memory.

There is a Goetze Memorial chapel at St Mark’s, Hamilton Terrace  which includes a number of War Memorial panels painted by him showing Christ in Glory with musicians, and flanking panels of St George, St Andrew, St Patrick and St David, with figures representing the armed services below.  There is also a memorial window to him in St Mark’s, Hamilton Terrace, designed by Leonard Walker.