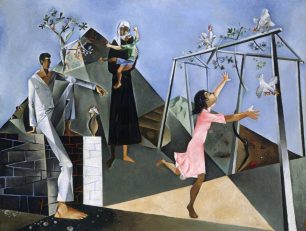 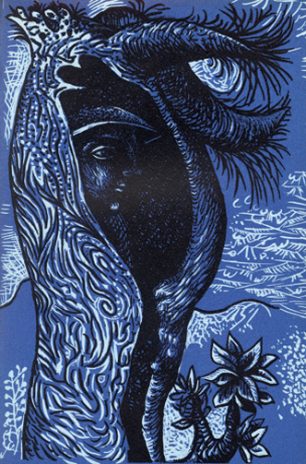 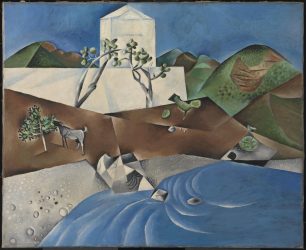 Hotel by the sea John Craxton

John Craxton was born in St Johns Wood to Harold Craxton, Professor of Pianoforte  at the Royal College of Music and one of the best piano teachers in the country, and his wife Essie Foulkner, a violinist.  John  was the fourth of five sons and had a sister Janet who became an oboist.

They lived at Acombe Lodge, 8 Grove End Road,  which the novelist Elizabeth Jane Howard, who visited for piano lessons, described as a large semi detached house adjacent to Lords cricket ground, the sort of house that had rooms opening out of one another, often rather dark in spite of the French windows in most of the ground floor rooms.  The only part of it that seemed consistently furnished was Harold’s studio at the back, which had 2 concert grand pianos, shelves for music and busts of composers.  A large jar contained something like pampas grass. It was full of the glamour of Bohemian disorder.

After seven different schools John, aged 17, went to study in Paris but on the outbreak of war returned to London enrolling at the Central School of Art. By the age of 19 he was sharing a maisonette in Abercorn Place with Lucian Freud, the rent being paid by an influential patron of the day, Peter Watson, who owned Horizon magazine and introduced them to John Piper, Graham Sutherland, Augustus John and art historian Kenneth Clark, who gave Craxton and Freud the run of his Hampstead library as well as buying their pictures.

Craxton had been rejected  for military service in 1941 because he suffered from pleurisy and his paintings at this time were a mixture of rustic dreams and modernist nightmare; he became one of the leading artists of the 1940s Neo-romantic movement.  In 1942 he had his first exhibition in Swiss Cottage Café and by 1944 he and Freud were evicted from their flat when neighbours became annoyed by Freud’s girl friends ringing the door bell at midnight and dead animals being kept as models for Freud’s and Craxton’s paintings – one had to be hidden in the oven when Kenneth Clark and his wife came to tea.

After the war he went to France, where he met Picasso, Italy and Greece, a country with which he fell in love and after 10 years of travelling finally settled at Hania on Crete where he lived an idyllic life painting the sparkling seas, olive trees, goats and human inhabitants, describing himself as a kind of Arcadian. He designed scenery for the Royal Ballet’s Daphnis and Chloe.  He was elected a Royal Academician in 1993.