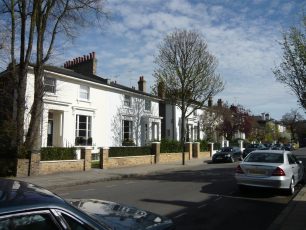 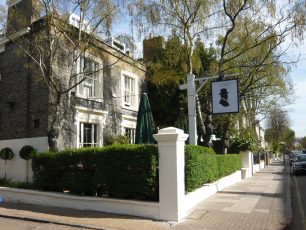 ANN HUXLEY MOVES INTO CLIFTON HILL DURING THE WAR

We got the house because Ernest Freud knew Julian Huxley quite well. It was going to be knocked down if someone didn’t go in quickly.

One bomb had gone in the front room and one had gone into the garden wall between 33 and 31, the bricks were in big heaps as well as the big hole made by the bomb, which was still there. the Eyre Estate tried to make us pay for this wall. We refused and got away with it.

IT WAS VERY COLD

The front room was a mess but the rest of the house wasn’t too bad, but of course none of the windows really fitted. It was very cold, there was no central heating and the boiler in the kitchen in the basement was right out in the middle of the floor. The range was still there. They took the range out and put the boiler back where the range had been.

Up the steps the front room was a lovely room with two long windows, yes, but a hole in the floor. They were little stick bombs which you could put out with a sandbag, which I have done, but only if you are there. Otherwise it makes a flame. What happened in the Finchley Road from the St John’s Wood tube up to Swiss Cottage tube, no-one was there, and those little bombs set them all alight, firebombs they were called, about 2 feet long. If you saw them in the street, you dropped a sandbag on them and that was it.

The top floor of the house was all right, we had a very antiquated bathroom with a basin and a door into the next little room. Because these houses were mistresses houses, that was where the man undressed when he came to see his lady in the afternoon. There was a separate lavatory next door. Three bedrooms in all. At the other end of Clifton Hill they built the pub for the coachmen to wait in, with their horses, that’s why that’s there.

A summary by Louise Brodie