You are here: Home>Places>Streets>David Peppercorn - Memories of living in Grove End Road, 1936-39 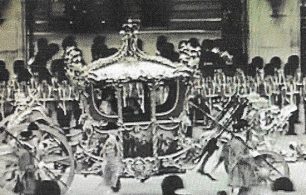 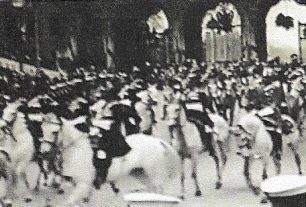 During the winter of 1936/7, my family, consisting of my parents, myself, younger sister and nanny, moved from Cropthorne Court in Maida Vale to Grove End Road, where the Hospital and Convent of St. John and St. Elizabeth had just built two semi-detached, Georgian-style houses.    We had the right-hand side house, as viewed from the front.   Next to us was an empty plot, [now the Hospice] with trees and bushes.   Our garden looked out on the hospital garden and it was from here, I suspect, that we quickly acquired a new member of the family, Tibbles, a black and white cat.   Her stay with us was punctuated by regular deliveries of kittens which were blamed by nanny on ‘those convent toms’.

At about this time, I became aware of the great world outside.   One winter morning, it was January 1936, I went as usual to say, “Good Morning” to my mother, who always took her breakfast in bed. It was part of a ritual that I had my orange juice with her before going down to my breakfast, taken with nanny and my sister in what was called the Morning room.   On that day, my mother told me that during the night the King had died.   Very quickly, everyone went into mourning.   My mother wore black, nanny wore a black armband, but said that my sister and I were too young for this.   Instead, she changed our blue buttons on our matching winter coats to black ones.

The year 1936 was also the year of the three Kings.   George V died in late January, the Prince of Wales became Edward VIII but then abdicated the following December, when his brother, the Duke of York, became George VI.   Preparations for Edward’s Coronation were already well advanced, so the new King was able to be crowned in May 1937 much more speedily than would normally have been the case.   It was an exciting day for me.   My father and one of my uncles, on leave from India to get married, had procured a balcony at my father’s club, the Junior Carlton on Pall Mall, from which the Coronation procession could be viewed.   To get there before roads were closed, we had to leave home very early and it was still quite dark when we left.   We then had breakfast in the Club.   There were glimpses of the procession on television, which was still in its infancy – the screens were minute by today’s standards.   The exciting spectacle was the seemingly endless procession where, for the last time, the exotically colourful uniforms of the regiments of the Indian Army passed by.

War on the horizon

We were all very attached to our lovely German cook, Frances, and through her we experienced a glimpse of another, more sinister world.   When she had been with us for around two years, my mother gave her extra time off to visit her family in Munich.   On her return, when my mother asked her how she had enjoyed herself, she burst into tears, telling my totally mystified mother that no sooner had she arrived, than the ‘secret police’ called to question her about her employers in London.   She found her parents too nervous to speak to her about what was happening.   She discovered that there was food rationing and concluded by saying, ‘They are preparing for war and I never want to go back there again’.   Frances wasted no time – she soon managed to marry her friend, our milkman, and so acquired a British passport well before the outbreak of war and the internment of aliens.

One result of having our own garden was that, for the first time, my father was able to put on a firework display for Guy Fawkes Night.   While he set them off in the garden, we watched enthralled in the warmth and comfort of the drawing room.   My father told us that his mother had made clear her disapproval of such a celebration which she viewed as anti-Catholic.   Fortunately, my father thought this an insufficient reason for children to miss out on fireworks!

My sister and I always took our meals with nanny in the morning room but, when I was six years old, I was invited to have Sunday lunch in the dining room with my parents and their guests, at which I was given a modest glass of hock and have always remembered that it was from the famous 1921 vintage.     (David subsequently became an MW (Master of Wine), (British Master of Wine, French wine importer and author, known for his books about the wines of Bordeaux)

One morning, coming to breakfast early, plates of haddock had just been placed on the table.   I started mine and then looked up to see Tibbles jump on the chair opposite, my sister’s place, and deftly remove the haddock to be more conveniently consumed on the floor.   My sister’s arrival with nanny and their discovery of the theft was followed by tears.   Of course, I had been a helpless spectator, albeit amused by feline opportunism.

On most days, nanny took us to Regent’s Park, and I went ahead on my tricycle.   My main memory is of a corner shop where we sometimes stopped, and I was permitted to buy some Fox’s Glacier Mints.  As the evenings drew in, the solitary lamp-lighter appeared, with his long pole turning on each light in our street.

When it was decided that my tonsils should be removed, my mother persuaded the surgeon that the operation should be performed on a table in the day nursery!

When I was six years old, I went to Arnold House School, in Loudoun Road.   My principal memory of this is of an extraordinary ‘parade’ in the playground to mark Empire Day and also of a very sympathetic female teacher trying to help me to read (battling undiagnosed dyslexia) and that her face was pock-marked.

We set off in the summer of 1939 for our usual summer holidays, when my parents always rented the same charming flint house in what was still a very rural Cliftonville on the Kent coast – I saw my first horse shoed by the farrier there.   However, that year our holiday ended on the 3 September, 1939 and we were never to return to my childhood home in Grove End Road.   The world I grew up in had ended!