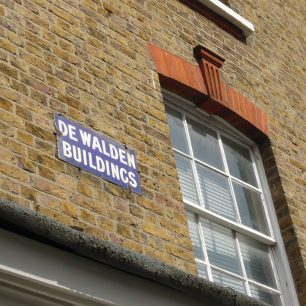 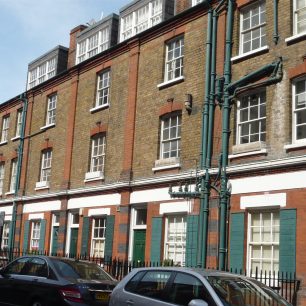 Monty’s grandfather had been a butcher, and his father worked in retail fashion, Selfridge’s, Harrods and Whiteley’s.

This is the verbatim transcript of Monty Dare, who was born in 1938

“My grandfather died in 1915. By 1916 my aunt was looking after the family during World War One. She moved with my Dad aged 11 into the De Walden Buildings in Allitsen Road. She lived at several numbers there, one was number 11 and one was 43, but she also lived at 98 Allitsen Road. My Dad lived with her till he got married in 1934. Then I came along.

My first recollection is going to see my aunt in De Walden Buildings in 1941. She was living in number 43, a flat on the first floor. It consisted of a large lounge furnished with family furniture that had been accumulated over the years and a lot of sepia photographs round the wall. It had a room leading off the main lounge, which was referred to as a scullery. I think it was where they did the cooking and the back window looked onto Charles Lane. Off that room was a bedroom and there was like a communal toilet shared by three flats. I don’t know whether that is correct but it was something like three. As I say the flat consisted of a lounge, scullery with a cooker in an alcove and then a double bedroom where we all slept, no bathroom.

I used to visit my aunt frequently. My uncle was away in World War One, not in the Second World War, so my aunt was living there with her daughter.

Then my mother had two more children and because of the problem of bringing up children…the family home was in Hampstead Garden Suburb on the edge of East Finchley, and it was decided that I would come and live with my aunt at De Walden Buildings for six months. My mother had two very young children to look after, so I came to De Walden Buildings in April 1942. I was over the moon, it was the best thing that could have happened to me. My aunt was tremendous, I really loved her. They made a big fuss of me, in fact too much of a fuss of me. My mother said I had been ‘thoroughly spoilt when I got home.

It was very interesting in retrospect to move from Hampstead Garden Suburb, which was semi-rural in those days. We had a field with a load of cows in at the back of us, we were on the edge of quite a big farm. You wouldn’t think of a farm being in East Finchley.

Then the first day I came to De Walden Buildings it was a Sunday afternoon. We came over from Hampstead Garden Suburb with my suitcase to Allitsen Road. The next morning I was absolutely amazed because all the people coming out of de Walden Buildings to go to work were talking and calling out to each other and that sort of thing, and it sounded as though everybody was in my bedroom.”

De Walden Buildings had a yard, which was a big space with an air raid shelter taking up a lot of room at one end. The siren used to go at about 9pm for the raids on the docks. They would stand in the road till the searchlights came on from Primrose Hill, then they would take shelter. After the raid the guns might open up as the planes went back home. The noise was tremendous. In the morning all the boys would rush out to collect shrapnel. The prize was to find a nose cap which was brass.

Mrs Reed, the grocers was still there in the 1960’s. You could buy small items including bundles of firewood. Next door was the newsagents where Aunt Lil bought her Daily Mirror. At the Home and Colonial, everyone was known by name. Cheese was cut with a wire, butter taken out with a ladle and patted into shape. Biscuits came in large tins and you could buy broken ones. Monty was always given one of these. Sugar came in bright blue bags and tea in packets. Everything was delivered to number 43 through the unlocked front door, downstairs to the kitchen. Lil got dressed to go out shopping, or to the park, she had a brown trilby, Windsmoor coat, handbag and gloves. They ate spam which was delicious, and powdered egg. Monty was given a tablespoon of Robelene, Tizer to drink, arrowroot biscuits and Smiths crisps with a twist of salt. The brewery delivered the beer to the 16 pubs in St John’s Wood, with a horse and cart. “They had a job stopping on a slope, it was street theatre.” Events were held in the drill hall in the De Walden buildings and Monty’s uncle took him once to see the army boxing championships there. The de Walden buildings today have been transformed into bachelor pads, with bathrooms and locked gates onto the street.

One of Monty’s most vivid memories was of the boating lake at Regents Park.  They saw the boats being delivered at the beginning of the season. They were beautiful with red leather seats, brass fittings and petrol engines. Aunt Lil persuaded the man to let Monty have a go, and he had half an hour of pure fun chugging round the lake. She said he would always remember it, and he has. When he took his granddaughters back to repeat the wonderful experience, they were so disappointed. The boats were plastic and grubby and there was litter in the water.

Another memorable time was when he was back with the family in Hampstead Garden Suburb in 1943, Monty was sent out to play by himself. He got on a bus to Golders Green, had no money but was not asked for it. Once there, he hopped onto another bus telling the conductor that he was going to Baker Street. However, when they came to Circus Road, he recognised it, and he thought of going to visit Aunt Lil and jumped off the bus. The conductor was worried about him doing this, and stopped the driver of the bus further down the road, and ran after Monty thinking he was lost! Lil was not at home, but Monty met her in the street and they went straight to the phone box to call his mother.

Monty was taken to Lord’s to see a memorial match between England and New Zealand during the war. They went to the nets and Monty remembers thinking how fit and healthy the New Zealanders looked. Later on, he paid about six pence to get in to see a match. He sat on a wooden stand on the left of the pavilion. The gentlemen and players (professionals and amateurs) came out of different doors.