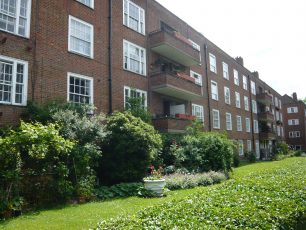 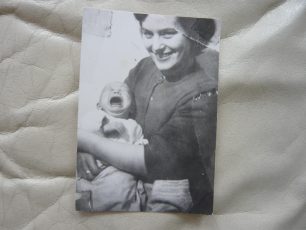 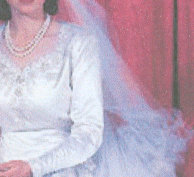 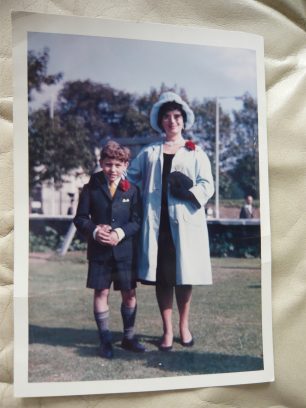 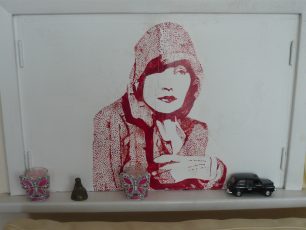 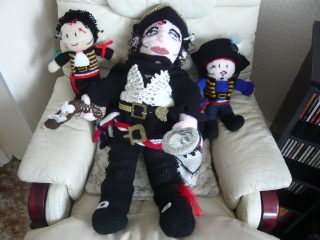 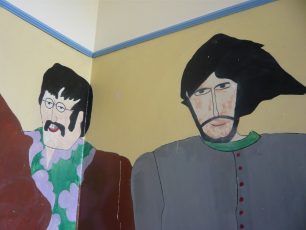 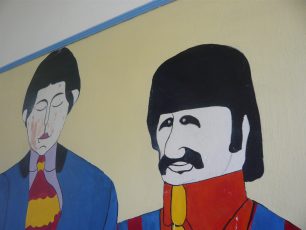 Mural of the Beatles by Stuart Goddard
Louise Brodie 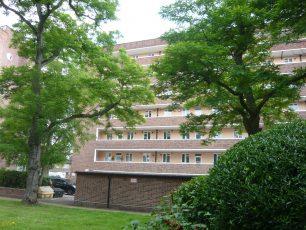 During the War, Betty Smith lived with her family in Marylebone High Street. At night they used to go down to Baker Street underground station, where they had bunk beds along the platforms (no trains ran). “We had to carry our bedding with us, huge bundles, and one time the air raid siren went before I got down there, so I just dropped it all in the street and ran down the stairs. ‘Where’s the bedding?’ my mother said – ‘well go and fetch it at once.’ So in spite of the bombs falling, I had to go up and collect it.”

It was very friendly sheltering down there, and Betty clearly remembers everyone singing songs such as Vera Lynn favourites. Someone had a concertina. At home, the cat had sixth sense and might suddenly rush under the oven (one of the heavy grey ovens on legs). This meant that an air raid was starting. Betty’s mother was deaf, and she would then look out of the window and see the black flag going up on the BBC building, which they always raised to signal an air raid, but the cat always knew first. Betty’s mother was a very good lip reader and she also carried a pad of paper round, for writing notes to communicate. Betty’s father worked for Broads the builders, and he did fire watching on three nights a week as well. He had to rescue people trapped in bombed and burning buildings – not easy.

Betty’s school, Marylebone Central, was often closed during the War. Food rationing was tough with no sweets. She remembers stopping American soldiers in the streets, asking “Got any gum, chum?” Madame Tussauds was hit by a bomb and was alight for days as all the wax kept the fire going. “The smell was terrible. And once we found an American haversack which turned out to be full of soap. My mother was so pleased, soap was rationed. We were the cleanest children in the street!”

After the War the family moved to O’Neill House in Cochrane Street, as the London Clinic took over the premises in Marylebone High Street. “It was lovely, it was all new with a modern kitchen and bathroom and we had three bedrooms.” Betty’s two older brothers had been fighting in the War, and she had two younger brothers as well.

When Betty left school she went to Barrett Street Technical College to do an embroidery course. She had always loved sewing. With the aid of samples of her work, she got a job with Norman Hartnell. She is particularly proud of sewing part of Princess Elizabeth’s wedding dress, the left hand panel of the bodice. It was cream silk, studded with sequins, diamante and pearls. She loved hand beading and could sew on 1000 sequins an hour! She did not like machine embroidery and in fact had a mishap with a machine one day. As she turned her head for a second, the machine went on sewing right down her finger. “Yes, I went to the Middlesex Hospital and all they had to do was to draw the thread out, up and down through all the holes in my finger!”

The older seamstresses had a room of their own with their names on the back of their chairs, and Betty was with the young ones, eight of them in a separate room. Once walking along the street to work, Betty put a firecracker under the skirt of the Head of the Workroom. Back in her place, the call rang out ‘Betty Smith to see Mr Hartnell’. They all thought she would be dismissed “But he just ticked me off and told me not to do it again. He was nice. I was cheeky”. One of the girls got married and took sequins and beads from Hartnells for her dress. She couldn’t ask anyone from work to the wedding or they would have seen, and told on her.

Betty had lots of friends, men and women. She met her future husband, Leslie Goddard who was a chauffeur. He would stop the car to say ‘good morning’ then ‘hello’ then ‘can I take you out tonight?’ He drove for the boss of Hovis McDonalds, a big black car and Betty got many rides in comfort. They went to the cinema and dancing, mainly to the Coliseum. “We had lots of fun! We had lovely dresses, tight bodices, wide black elasticated belts and then the very full skirt with pink and blue layers fanning out over the knee.”

Betty had a difficult birth with her son Stuart. They moved in with her mother, who also liked looking after the baby. Betty and her friends, all with their prams, made the most of Regents Park, going over there for a walk and a coffee, and they also enjoyed listening to the band playing from time to time.

Adam and the Ants

Stuart went to Robinsfield, Barrow Hill School and Marylebone Grammar School. He received very good schooling throughout and achieved 11 O levels and 3 A levels, Music, History and Art. He was always artistic and painted all the time, including onto some of the walls in the flat they had moved into on the Townshend estate. He did this one of Greta Garbo which is on the hatch, while Betty was out shopping one day. He was 11 years old. Later he went to Hornsey Art CollegeHe is best known now however, for his music – he became Adam, of Adam and the Ants. He made recordings in the Abbey Road Studios, created the line across his face which became his trademark, and was very famous in the 1970s.

Betty loves living in St John’s Wood. “I’ve got to know everything and everyone here, though it is a shame that people don’t talk to each other in the street any more, scared to, I suppose, but the Park is nice and buses and transport mean that you can get about easily when you want to.”

in conversation with Louise Brodie