You are here: Home>Memories>Personal Memories>Dyson Heyden - Memories of St John’s Wood in the late 1940s 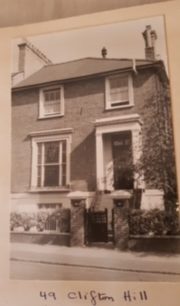 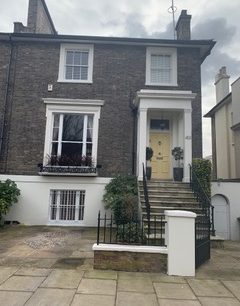 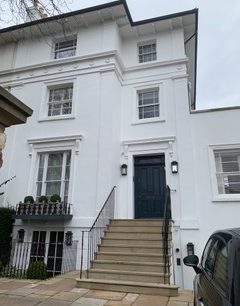 Mrs Leaver asked me to set down my memories of St John’s Wood. I lived there at four addresses from the age of four to the age of seven – early 1947 until December 1950. My father was a diplomat working in the Australian High Commission.

Adults looking back on their childhood often think they were conscious of particular events and conditions. But it is not clear whether that seeming consciousness rests on actual memory or on what the adult has been told by others later. Let me give an example. In 1944 my father was serving in Moscow. In the summer of that year in the centre of Moscow a big parade of captured German soldiers took place one weekend. There was not much to do in wartime Moscow in the daytime. So my mother and father took me to see the parade. The Germans were wearing the uniforms they had been captured in. Those uniforms were worn out. The soldiers looked depressed and often ill. All adults present were aware that the chances those soldiers ever returning to Germany alive were very slight. The sight was regarded by my parents as so repulsively revolting that they took me away back to our flat (which, by coincidence, had housed German diplomats before their hasty departure on 22 June 1941). I think I can recollect the scene – the shuffling Germans, the silent Russian civilians (most of them no more free than the Germans), the depressing atmosphere of human suffering. It is probably not actual recall, since, striking though the event was, I was less than two. My consciousness of it stems probably from the fact that the event was quite famous. It is discussed in history books. My parents certainly mentioned it from time to time in reminiscing about the good old Moscow days.

I am, however, confident, that what follows about London in general and St John’s Wood in particular is based on actual recall. For one thing, apart from various visits to Lords, I have only been back to St John’s Wood once since 1950. My memory is therefore not contaminated by later events or later visits.

Two of the four residences in which we lived were in Clifton Hill,  one at 6 Loudon Road (next door to Arnold House School and now demolished to make way for the American School) , and one at 34  Acacia Road. I can remember a great deal of bomb damage, not yet repaired, particularly in Acacia Road. Some buildings were flattened while their neighbours were safe. The bomb sites were memorable because they had quickly become covered in vegetation, which flowered beautifully in summer. The picture of London which George Orwell painted in Nineteen Eighty Four, written in the late 1940s, was based on the post-war scene as he perceived it. It was characteristically over-bleak, but not unrealistic.

London street life then was different. There were cars, there were buses and there were trucks, though not on anything like the twenty first century scale. When my father bought a car in 1948 – an Austin 14 – there was jubilation since there were many neighbours who did not seem to have a car. There was a great deal of horse-drawn transport. I particularly remember ice-delivery vehicles – for we had no refrigerator, only an ice box that needed replenishment every few days, with trails of sawdust forming as blocks of ice were carried into the house. Residents were alert to the passing horses, which supplied excellent fertilizer for the many gardens of the suburb. A great many things were delivered at the door – mail, milk, newspapers.

The street surfaces were undergoing a process of replacement. The original surface consistent of wooden blocks covered by tar. The new surface was more even, like that of a modern street. Wooden blocks were coveted, because, when split, as they easily could be, the tar made them excellent kindling for the wood, coal or coke fires which were universal.

Another feature of London street life which differed from the modern scene concerned itinerant peddlers. There were constant calls from people who would mend pots and pans, or sharpen knives, or do other odd jobs. There were Frenchmen and Spaniards on bicycles, speaking little English but picturesquely draped in onions. There were, of course, no supermarkets, and much more food than now would have been bought in small grocery shops. I do dimly remember the concept of rationing, a system that was even more pervasive than in the war. One does not miss what one never had much of – for war time Russia was very short of food, and Canberra, where I lived in 1945-1947, was a very small place with very little choice in food. So I cannot claim to remember suffering from the shortages of meat, fruit and vegetables, though to my perception there did not seem to be enough sweets. But I also remember the extent to which what might be called ersatz food was consumed. I particularly remember a yellow powder sold in red packets: when the powder was mixed with water and heated, a product described as “scrambled eggs” emerged. There never was any supply of genuine scrambled eggs. A common item of diet was a type of tinned fish called snoek.

I remember that our heating was supplied by burning coke or coal – heating for bathwater, atmospheric heating and heating for cooking. The result, multiplied a million fold, was significant atmospheric pollution. In particular, in winter there was thick fog, particularly at night – smog. I remember one night when my mother was ill and my father took me and my sister out to eat, it was not possible to see anything. Cars and buses moved almost invisibly at snail’s pace. Pedestrians had to walk constantly touching the walls and railings adjoining the pavements. Nor was it easy to breath freely in very thick smog.

What entertainment was there? We often went for walks – sometimes to Regent’s Park or Whipsnade Zoo. Walking was a very common practice. As a result there were many dogs on the streets, displaying a remarkable variety of breeds and indeed of owners. My parents did not mind me going around the streets unaccompanied – something which the conditions of modern urban life would not make sensible. A family friend once said to my father that one of the characteristics evening cries of St John’s Wood were the words “Dyson! Dyson!” as my mother roamed the streets looking for me at the time of the evening meal.

Once the Austin 14 had been acquired, there were occasional weekend outings. There was a trip to the farm of some friends in Essex: their farmhouse was memorable for being thatched. There was a picnic at Runnymede when, though it poured with rain, the grant of Magna Carta was celebrated with a rare treat – chocolate biscuits. Lord Wright served a Sunday lunch at his flat in Windsor: for nearly six decades I have known him to be an extremely distinguished lawyer, but he seemed then to be a very quiet and solemn old man. Though there were few trips to central London, there was a Christmas party at Australia House in the Strand.

I went to two schools – a sort of kindergarten called “Mrs McCaffery’s School” and Arnold House School. I was happy at both. The latter seemed enormous at the time. But when I passed it in about 2010 the playground was actually very small. There we sang patriotic songs – “Boney was a Warrior” and “The British Grenadiers”. There was boxing, carried out very timidly. There was soccer. There was cricket. My school companions had birthday parties and celebrations of Guy Fawkes’ Night with fireworks, so far as the November weather permitted. The Heydon household did not have television – indeed very few people did, and I never saw television until 1952 towards the end of my father’s next posting in Brazil. The radio made no impact. I read intensely – mainly Enid Blyton and magazines like “The Eagle”, I think it was called. Biggles and William were just around the corner. I remember that the last book I read in England was about an agent in the Khyber Pass named “Victor Gaunt”. I liked the book, but never encountered either the character or the author again. My father occasionally took me to Lords – and 1947 was the great year of Compton and Edrich. I repeatedly said while the latter was bowling that he was throwing. I began to collect stamps, with a Stanley Gibbons catalogue. I can remember only going to two films – one was about Al Jolson, and the other was “Treasure Island”. The latter I particularly liked, because the screening was continuous and one could stay there watching the film over and over again until eventually whoever was in charge rebelled.

So that was St John’s Wood in the late 1940s. It was a little war battered. It was a little dirty. Many people were not very well fed or clothed. It was just at the end of the age of horse drawn transport. Every time I see coke, or smell burning tar, or see a horse drawn delivery wagon, in central Sydney (a very rare sight now), or see the words “Treasure Island”, or taste scrambled eggs, or even see red coloured packages, or hear Al Jolson, or think of Napoleon, or eat chocolate biscuits in very wet weather, my mind involuntarily swings back to intense memories of St John’s Wood. Now St John’s Wood is not battered or dirty. There are no horses. People no doubt have too many cars, eat too much food, and own an unnecessarily large number of clothes. But in the late 1940s St John’s Wood bustled. It had a robust life. It had a sense of community. In the eyes of a small child, innocent of much experience of life, it had a lot of charm. I hope it still does.