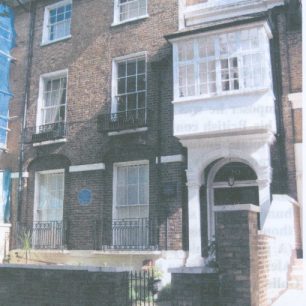 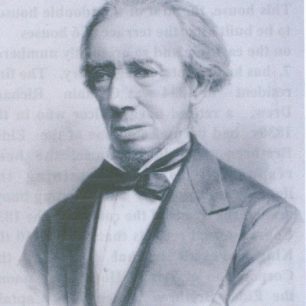 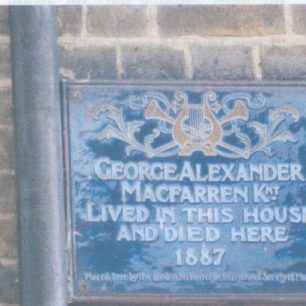 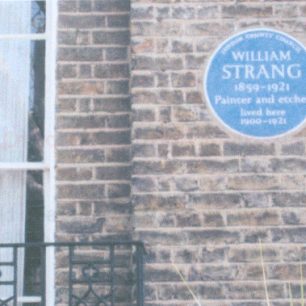 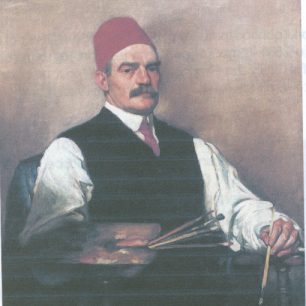 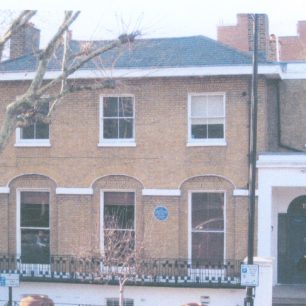 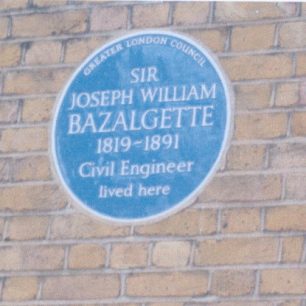 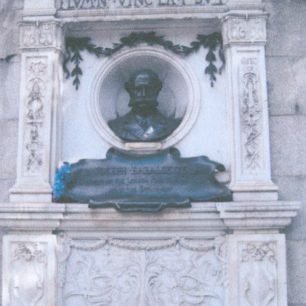 This house, the first of the “double houses” to be built after the terrace of 6 houses on the east side and so originally numbered 7, has had an interesting history.

a retired naval officer was the first resident in 1834 who, in the 1830s, had been elected one of the Elder Brethren of Trinity House, the body responsible for maintaining the lighthouses, lightships and shipping buoys around the coasts of the country.  The 1833 Court Journal records that on 10 May the King gave his annual dinner to the Corporation of Trinity House and among the Elder Brethren present was Captain Richard Drew.

In 1841, Captain Drew was called in by the House of Commons Select Committee on West Indian Mails to give his opinion on the most suitable port for steam packets delivering mail from the West Indies. I was 14 or 15 years sailing out of Bristol as boy and man (born in Bristol) and 10 or 12 years out of London. Since I retired from the sea I have been 15 years at Trinity House. A great portion of my time has been devoted to ascertaining the state of the harbours and the pilotage connected with them.

Captain Drew’s answers to detailed questioning on the various west country ports show his expertise. He opined in favour of Dartmouth but did say he had been asked by the Admiralty to survey the Bristol Channel but he had not yet done so.

A report in the Colonial Magazine and Commercial Maritime Journal in 1843 reads: while engaged on a survey of the Bristol Channel on 4 July, as four of the Elder Brethren of the Trinity House were in their steam packet inspecting the buoys in the Channel, they found it necessary to enter a small attendant boat in the course of their investigation. On their return the steamer cut the boat in two, and all of them were immersed in the water.  Two saved themselves by swimming, viz Capts Probyn and Madan, but we regret to say the others, viz Capts Drew and Jenkin perished.

His wife Mary, widowed at just 42, lived on at the house with her two daughters for four years.

was the son of a dancing master and author who suffered all his life from poor sight and had to have an amanuensis.  According to the musicologist Oliver Davies:

Macfarren is one of the most fascinating lost masters of nineteenth century British music.  A cultured musician in every sense, he brought formidable energies to bare upon almost all aspects of mid-Victorian musical life, being at various stages Principal of the Royal Academy of Music, Professor at Cambridge, conductor at Covent Garden, programme-note writer for the Philharmonic Society and editor of Handel and Purcell.  He was knighted in 1883. As a composer he was technically superior to most of his British contemporaries and, in view of the total blindness which struck him in 1860, extraordinarily productive. An output which included eighteen operas, thirteen oratorios and cantatas, nine symphonies and one hundred and sixty two songs might well be thought impressive by any standards.

He married Natalia 1827-1916 who was born in Lubeck but studied and the Royal Academy and was an operatice contralto and composer.  Sir George arrived at no 20 in 1874 and a plaque in commemoration of him is on the front façade of the house.

There is another plaque at no 20,  an LCC (London County Council) Blue Plaque which records that the Scottish painter and etcher William Strang lived there from 1900–1921

Born in 1859 at Dumbarton, the son of Peter Strang, builder, and educated at the Dumbarton Academy, William Strang worked for eighteen months in the counting house of a firm of shipbuilders before going to London in 1875 when he was sixteen. There he studied art under Alphonse Legros at the Slade School for six years. Strang became assistant master in the etching class, and  had great success as an etcher.  He was one of the original member of the Royal Society of Painter-Etchers, and his work was a part of their first exhibition in 1881. Some of his early plates were published in Portfolio and other art magazines.

Some of his best etchings were done as series – one of the earliest, illustrating poet William Nicholson’s Ballad of Aken Drum, is remarkable for clear, delicate workmanship in the shadow tones, showing great skill and power over his materials, and for strong drawing.  Some of  Rudyard Kipling’s stories were also illustrated by him, and his likeness of Kipling was one of his most successful portrait plates.  Other etched portraits included those of Ernest Sichel and of J.B.Clark, with whom Starng collaborated in illustrating Baron Munchausen (1895) and Sinbad the Sailor and Ali Baba (1896). Thomas Hardy, John Masefield and other distinguished men also sat for him.  One of his major paintings was of Vita Sackville-West entitled Lady with a Red Hat which is in the Glasgow Museum. The Tate Gallery has one of his best-known paintings, Bank Holiday, later used for the book cover of E.M.Forster.

His son Ian Strang 1886 – 1952 was an etcher, draughtsman and painter, mainly of architectural and landscape subjects.  He wrote the Student’s Book of Etching (1938).

This was the very excellent gentleman’s residence then no 48, later no 83 and now no 17, which displays a plaque to Sir Joseph Bazalgette, the civil engineer responsible for designing London’s sewers.

came from a small town, Ispagnac, on the western edge of the Cevennes in south west France. Louis Bazalgette, born 1750, followed in the family trade of tailoring and had made his way to London by 1775. Here he became tailor to the Prince of Wales and extremely successful.  One of his sons, Joseph William Bazalgette, born in 1783, determined to go to sea and joined the British Navy aged 12, serving during the Napoleonic Wars and rising to the rank of Commander.  He was wounded during a skirmish off  the Spanish coast in 1809 and retired in 1814, receiving a gratuity and government pension and devoted himself to good works such as the Naval & Military Bible Society and the Sailors’ House and Asylum.

He married Theresa Philo Pilton in 1814  and a daughter Theresa was born in 1817 and a son Joseph William in 1819 when they lived in Enfield. By 1828 they were living at 5 Lower Lisson Street (just north of the New Road) and then moved in to the newly-built Hamilton Terrace house in 1831 where the last two of their eleven children were born (four of whom died in infancy). Mrs Bazalgette  became ill in the 1840s and the house was put on the market in 1847; the family moved to Ryde and by 1850 both Captain Bazalgette and his wife had died.

Their son Joseph William Bazalgette trained as a civil engineer and after working on projects in N Ireland set up in 1842 as a consulting engineer in Westminster.  In 1849 he joined the London Metropolitan commission of sewers, becoming chief engineer by 1852 and in 1855 to its successor the Metropolitan Board of Works, which had control of the building of a new London sewer system.  83 miles of intercepting sewers were finally completed in 1884. Bazalgette was also responsible for the design and construction fo the Victoria Embankment, under which the new sewers were to lie. A bust of Sir Joseph (knighted 1874)by the sculptor George Simmomds, himself later a resident of Hamilton Terrace,  still exists on the Embankment near Charing Cross.  Sir Joseph died in 1891.

Marks was an English artist who took a particular interest in painting birds. Born in London as the fourth son of John Isaac marks, a solicitor who later became a coach builder, Henry enrolled at the Royal Academy Schools in about 1851 and first exhibited at the Royal Academy in 1853.  When his father’s business failed, Henry had to support his mother his three younger brothers and, from 1856, his new wife Helen Drysdale.  He did this by supplementing his income from painting by carrying out decorative work for various patrons.  These included the Minton works, for the stained glass makers Clayton and Bell, by designing a frieze for the outside wall of the Royal Albert Hall and for the house of the artist Lawrence Alma-Tadema.  He became a member of the St John’s Wood Clique in 1862 and in the 1870 Marks had moved into no 36 Hamilton Terrace (then no 15) where he had a “garden pavilion”. By 1871 he had moved to no 40 (then no 17) and built on a studio at the rear, covering twice the area of the house and including an aviary. He employed not only a cook and two maids but housed in the adjoining stables a coachman, his wife and family.

He was elected a member of the Royal Academy  in 1878 after his painting Convocation had been shown,  Most of his bird paintings were watercolours, which he exhibited at the Old Watercolour Society or at the Fine Art Society.

Marks most important patron was Hugh Grosvenor, 1st Duke of Westminster, and he worked on decoration for the Duke’s house, Eaton Hall, Cheshire, between 1874 and 1880. For this house he painted two canvases 35 feet long (11m) of Chaucer’s pilgrims, and twelve panels of birds. Possibly his most famous bird painting is A Select Committee (1891, now at the Walker Art Gallery. His first wife died in 1892 and the following year Marks married Mary Harriet Kempe, also a painter.  He died in his London home and was buried in Hampstead Cemetery.