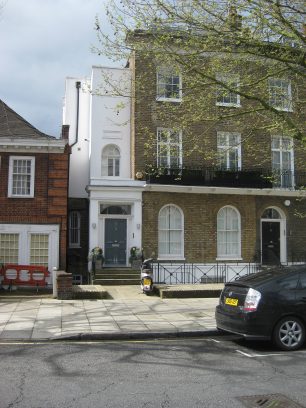 This end of terrace house was built in 1827 and the following year John Bird,  (1774-1856) described as an architect and surveyor (or according to the census return a bricklayer) moved in. It is assumed that he was the head builder associated with the construction of the first 12 houses in the Terrace,  and he stayed there for nearly 30 years. He was married and had two sons and three daughters. One of his sons, George Bird, went into the building trade and was at one time working from an address in Edgware Road.

He was followed by a retired colonel and his wife and family and then around 1879 we find that George Bird, by then a widower, returned  to no 5  with his daughter,  Flora, but died in 1882.  Ten years later Flora, unmarried but of independent means, was alone in the house except for one domestic servant, and remained there until 1905.

In 1908 William Edward Whitehouse, moved into no 5 from Abercorn Place with his wife Esther and three children.  William Edward (1859-1935) was a cellist, who taught at the Royal Academy of Music, Royal College of Music and King’s College, Cambridge; his students included Felix Salmond and Beatrice Harrison, who both became closely associated with Edward Elgar. He played with violinist Joseph Joachim, and formed ‘The London Trio’ with violinist Achille Simonetti and pianist Amina Goodwin.  In 1914 they moved to Castellain Road, Maida Vale.

From 1932 Frederick William Evans MC and his wife Carmen spent 28 years in the house. Evans was the Managing Director of Thomas Goode and Son, South Audley Street,  the  renowned china, silver and glassware shop , which still exists today.

In1960 Mario & Esther Amato, Italian immigrants, moved in. He was a draughtsman. A variety of people shared the house according to electoral registers .

’Sleazy boarding house’ and ’slum’ and ‘running a rooming house with 35 people there’ was the opinion of Mrs Gibbs at no.7.  Bedsits at this address were advertised in the window of the newspaper shop on Clifton Rd. Some people suspected the premises were being used as a brothel and in 1970 the Amatos were evicted for breach of contract.

Peter Leaver QC,  his wife Jane and their family moved in and stayed until 2006.