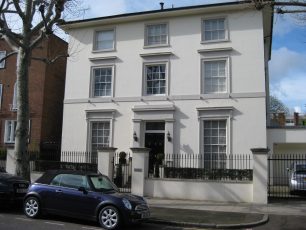 Built in 1839 on the west side of the Terrace originally as no 43 (later 78),  this is a larger house than those built to the south of it, with four floors including a large basement.

Its first occupant was a solicitor Charles P Allen but in 1861 a Miss Elizabeth Nugent started a school with a French and German teacher, 1 scholar and 4 staff.  By 1871 the school had increased to 17 resident pupils from all over Great Britain, Trinidad and Guyana and with a staff of five.  Ten years later it had gone and after that  the families seemed to change about every 10 years.

There are no records for the period during the war but in 1945 perhaps the house was  divided up as records list a Lady Florence Brooks and Susanna Llewellyn-Longstaff, 2nd wife of   Andrew Llewellyn-Longstaffe, a descendant of James 1 & V1.

From 1984-1994 it was the official residence of the Senegalese ambassador and when receptions were arranged, the guests arrived in all kinds of colourful national costumes. On one occasion the President of Senegal paid a state visit so a large reception was put on for him at no 31.   He arrived in full regalia in a large limousine specially adapted to accomodate his great height.