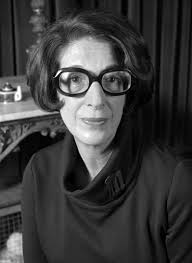 Marjorie Proops was born Rebecca Marjorie Israël in 1911 and married Sidney Proops in 1935. She became an agony aunt for the Daily Mirror and had a  20 year long passionate love affair with Philip Levy who was the Mirror’s chief legal advisor. Her marriage to Sidney, to whom she bore a son Robert, lasted until 1988. She was awarded an OBE in 1969 . She and “ Proopsie” lived in what was described in her obituary in the ‘Independent ‘  as  a  “modestly grand house in St John’s Wood “ . This was in fact 33 Hamilton Terrace.