You are here: Home>Arts>Literature and Writers>We'll gather lilacs- literary references to blossom in St John's Wood

Why not grow a lilac in your garden or on your balcony? 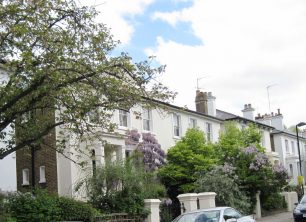 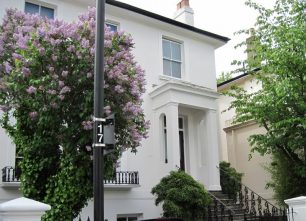 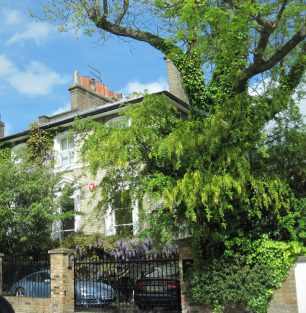 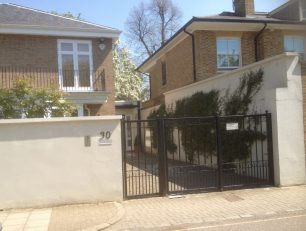 There are many references to the abundance of blossom in St John’s Wood in the past, particularly pear and lilacs. Mireille Galinou’s book notes that most Eyre estate gardens had  varieties of Victorian pears – which do not ripen on the tree but do if kept indoors through the winter – they were probably Catiliac or Glou Morceau pears, which were superseded by William pears which ripen on the tree.

writing about the garden at 54 Hamilton Terrace:    the flowers suddenly begin to appear in our old-world garden— a little lonely and a little diffident but obstinately British in their defiance of the weather. Theirs is the right to be born again each springtime and they will not allow their immortality to be denied by sulking skies or cruel winds.  A fortnight later the sun relents and suddenly the giant pear tree in the garden bursts into blossom as if Romeo and Juliet were to be wedded there in the open air. It is such sheer enchantment that one looks at the radiant canopy of blossoms until one feels like crying with the poet, “O be less beautiful, or be less brief!”

Tomorrow there will be more flowers in the garden awakening from their long, long sleep. Soon I shall be able to sit in the sun and listen to that distant shout from Lord’s cricket ground as England scores another run. We might be in the heart of the country once the summer is really come. . The cat has just seen a fallen petal move in the breeze and its worst suspicions are aroused.

writing about the pear tree in the garden of 5 Acacia Road in her story “Bliss”; The windows of the drawing room opened on to a balcony overlooking the garden.  At  the far end, against the wall, there was a tall, slender pear tree in fullest, richest bloom; it stood perfect, as though becalmed against the jade-green sky. (with thanks to Gerri Kimber for  this reference)

inter war years artist,  loved St John’s Wood because it had the peace and serenity of a country village. In spring the gardens were full of the blossom of old fruit trees, lilacs, laburnums, hawthorn and magnolias.

I never had but one American friend, and lost him through a good crop of pears. He paid us a visit in England; whereupon in honour of him, a pear tree, which had never borne fruit to speak of within memory of man, was loadedwith ninety dozen of brown somethings. Our gardener said they were a keeping sort, and would be good at Christmas; whereupon, as our Jonathan was on the eve of sailing for the States, we sent him a few dozens to dessert him on the voyage. Some he put at the bottom of a trunk (he wrote to us) to take to America; but he could not have been gone above a day or two, when all our pears began to rot! and I presume spoilt his linen or clothes, for I have never heard of him since. Perhaps he thought I had done him on purpose, and for sartin (sic) the tree, my accomplice, never bore any more pears, good or bad, after that supernatural crop.

Better men than I will sit in this study and pace the lawn in the garden with the high walls. The lilies and laburnums and all the gay fellowship of flowers will find a new waterman.  The thrushes and blackbirds and wood pigeons will find a new victualler. The private forecourt, so richly hung with creeper, will give back my footfalls no more.

most of them were stucco fronted and painted in white or pale colours.  They were set back from the road with a garden in front and behind. Lilacs were abundant in the gardens, and  many gardens had pear trees, left over from the days when orchards had flowered down Finchley Road.

In front of the dining room windows were three lilacs.  At the side of the house was a heavy green wooden door into the back garden and beside it was a laburnum tree. Best of all were the lilacs that stood beside the wooden steps that led from the french windows of the drawing room down to the back garden. The greater part of the back garden was taken up by a circle of lawn.  Along one side of this was an herbaceous border, while on the other side stood a couple of lime trees  between which the hammock swung.

Ours was big enough for a fair-sized lawn and a broad herbaceous border and had a fifty foot oak tree at its far end. As our garden backed on to the much larger  garden of a house on the  Finchley Road, which was mainly orchard, in spring the room on the first floor where I did my writing looked out on a sea of blossom and, until late autumn, the leaves of the trees formed a screen through which no other house could be seen.

John Galsworthy in the  Forsyte Saga

In the next house someone was playing over and over again La Donna e mobile on an untuned piano; and the little garden had fallen into shade, the sun now only reached the wall at the end, whereon basked a crouching cat, her yellow eyes turned sleepily down on the dog Balthasar. There was a drowsy hum of very distant traffic; the creepered trellis round the garden shut out everything but sky, and house, and pear-tree, with its top branches still gilded by the sun

The solid garden gate and the high brick wall were topped with pieces of broken glass bottle to prevent burglars from scaling them. Against the entire length of this wall grew a row of linden trees. We were proof against the vulgar gaze of passers-by. Nobody could know of our thirty six lilac bushes or the apple tree in the back garden that blossomed each spring or the straggly grapevine that draped the wall at the far end.

But after the War, everything had changed: the thrushes sang no more in the blossoming pear trees. For great blocks of flats had been erected, hiding the sky. Vallambrosa had been demolished.

Clare’s brother Roland Leighton (who was killed in December 1915 during the First War ) wrote to his girl friend Vera Brittain  from his billet in Flanders on 15 May 1915: I am writing this sitting under a lilac tree in the garden. The sunshine and the smell of the lilac remind me of May in a St John’s Wood garden – and it hurts.

In “St Johns Wood – an Abode of Love”

:their high walled gardens adrift with lilac and the scent of jasmine.

the door in the garden wall had been green before, so that the original grass colour had faded to a general turquoise. The lilac tree which looked over the wall had pushed, gently but inexorably, and the wall had yielded with a gentle curve. Green wooden shutters and a Regency veranda adorned the stucco. In front was a book lined room with  a Broadwood piano, and behind a dining room more books and a desk where my father wrote of an evening.  Above were three small bedrooms and on oak-panelled bathroom. Nearly all the windows looked out to corners of other small houses, hidden among the fruit trees. A century old pear tree grew outside one of the windows, and the garden provided some new horticultural triumph every year.

In “Inconvenient People – lunacy, liberty and the mad-doctors”,

Sarah Wise offers another reason why trees and bushes were planted behind the high walls of a St John’s Wood villa, with its lush shrubberies and bushes, the lilac and laburnum trees that whisper – it was to hide  the people imprisoned there by doctors paid large sums to say they were mad by relations who wished to remove them from their homes and spend their fortunes.  And contrary to the events in novels like Woman in White, most of the people incarcerated were men.