You are here: Home>Arts>Literature and Writers>Marie Leighton and her family in Abbey Road before World War 1 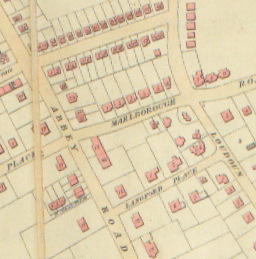 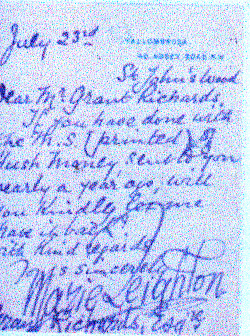 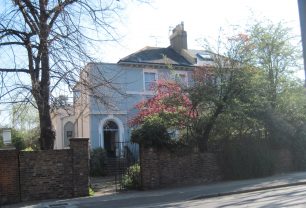 The house next to Vallombrosa
Bridget Clarke 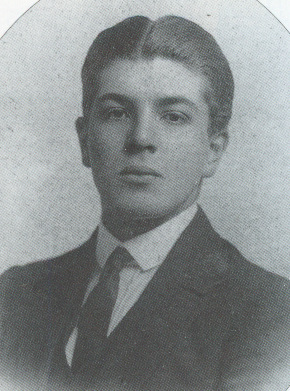 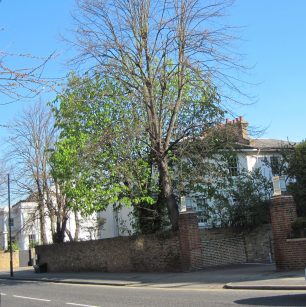 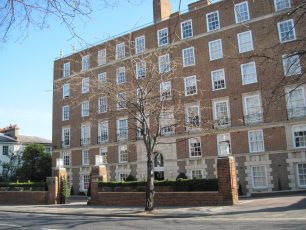 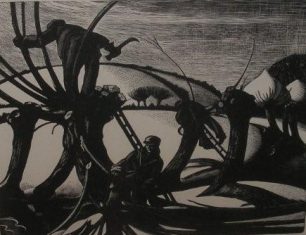 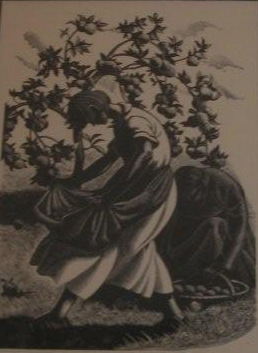 at 40 Abbey Road “was satisfactorily invisible from the road. The solid garden gate and the high brick wall were topped with pieces of broken glass bottle to prevent burglars from scaling them. Against the entire length of this wall grew a row of linden trees. We were proof against the vulgar gaze of passers-by. Nobody could know of our thirty six lilac bushes or the apple tree in the back garden that blossomed each spring or the straggly grapevine that draped the wall at the far end.”  But romantic as the area seemed, “these bosky gardens protected houses where pictures were really painted and books were actually written. Artist’s models  disappeared each morning into garden gates — Wafted by the breeze, from some open window, came the sound of a singer practising his part at Covent Garden.”

This house was the home of Robert Leighton (1858-1934), his wife Marie Connor Leighton (1865–1941) and their sons, Roland (1895-1915) and Evelyn (1901-1969) and their daughter Clare (1898-1989).  Robert and Marie were both authors, with Marie the more successful of the two and the main financial supporter of the family.  She wrote a large number of sensational novels, which were endlessly serialised by the Daily Mail. As well as being a novelist of boys adventure stories, Robert was  the first literary editor of the Daily Mail where he could intercept reviews of his and her works that he found unsatisfactory.

“Vallombrosa had only one garden gate – towards this gate converged the paths from the front door and from the kitchen door. There were two bells on the garden gate; one with Visitors engraved round its rim and the other with Servants.” The children were able to watch from the nursery window and see the front steps whitened and the brass on the front door polished by Dolly the kitchen maid in the early morning. Marie’s secretary arrived at five to ten, then at half past ten the butcher’s boy came for orders, returning with the meat an hour later, as did the greengrocer’s boy, the fishmonger’s assistant and the poulterer’s boy. In the afternoon, there was the muffin man, the cart with logs, street singers, knife grinders and barrel organs and then the lamplighter came at dusk in winter months. On Tuesday and Friday afternoons a horse-drawn vehicle with liveried coachman stopped outside to deliver the latest novels from Mudies Library.

And every day there were their mother’s many admirers, for Marie was a romantic where affairs of the heart were concerned, though quite prosaic about menus- depressing amounts of suet roly-polys and milk puddings were consumed  – and household tasks –  “the surest way to catch pneumonia, she said, is to wear underclothes that have not been properly aired; chemises and drawers, which go next to the skin, it’s always on the safe side to let them go on airing for the better part of a week.”

During the First World War the Leightons moved to the country; money was short because the Daily Mail cut down on serials to make room for casualty lists and in the end the bank foreclosed and all the servants had to be dismissed and Vallombrosa  was abandoned. Evelyn became a cadet in the Royal Navy and luckily survived the war but Roland enlisted in the Army; while at Uppingham School  he had  fallen in love with Vera Brittain (1893 – 1970)  and they later became engaged, but he was killed in France in  December 1915 half an hour before leaving for Christmas in England. In May 1915 he wrote to Vera from his billet in Flanders: I am writing this sitting under a lilac tree in the garden. The sunshine and the smell of the lilac remind me of May in a St John’s Wood garden – and it hurts.

Their story was immortalised in Vera’s biographical Testament of Youth. Although the shock of the death of her favourite child made Marie ill for months, in the end she was undefeated. “Women have had their sons killed in battle from time immemorial, but they have not whined.” she said. She later wrote an anonymous memoir of Roland called Boy of my Heart.

But after the War, everything had changed: “the thrushes sang no more in the blossoming pear trees. For great blocks of flats had been erected, hiding the sky.” Vallombrosa had been demolished. St John’s Wood residents had always scorned blocks of flats, which provided no seclusion for their inhabitants. “No writer or painter or poet could live there, they’d be stifled to death in their souls,” said Marie.  Now Old Manor Court, recently re-christened Manor Apartments, stands on the site of 40/42 Abbey Road. However, Marie believed that St John’s Wood will always be St John’s Wood, even though it were levelled to the ground. Anything that was so full of magic s the life of St John’s wood could never really disappear. It is indestructible within the memory.

Evelyn became a captain in the Royal Navy, was awarded the O.B.E. and died in 1969; his wife Cecilia amazingly lived to be 105 and died on 4 April 2012. Clare Leighton studied at the Slade School of Fine Art and  became famous for her wood engravings. She designed the glass windows in Worcester Cathedral, Mass,  in New England which depict the life of St Paul and comprise the entire fenestration of the whole cathedral. She emigrated to America in 1945 and died in 1989.

Quotations are from Clare Leighton’s Tempestuous Petticoat 1947 and information about Worcester Cathedral Mass from Jeremy Leighton.