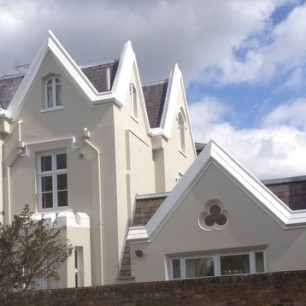 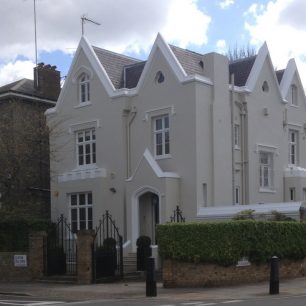 Although Elizabeth Jane Howard was brought up in Kensington, she often visited St John’s Wood as a child when her grandparents came to live in St John’s Wood in the 1930s; her grandfather was composer Arthur Somervell, and he and his wife moved from Bedford Gardens W.8. to 105 Clifton Hill,  one of the Gothic villas on the corner of Greville Road. This area was developed by builder Francis Armson in 1843 and as  Mireille Galinou writes,  the device of placing Gothic houses on corner sites which had begun on the Eyre estate is particularly  striking at this junction with grey and fairly austere houses facing the street.

The house was much lighter than the Somervell’s previous house and had a larger drawing room with more space for the piano. There were three bedrooms on the first floor – one was for Gania, one for Mo’s study and a tiny third room in which he slept.  On the top floor were 2  small attics in which grandchildren used to stay and one was papered like the sky, with clouds.  Each time we stayed we were given a paper seagull to stick wherever we pleased in the sky. There was also a large drawing room, a small dining room leading off it, a cavernous basement and a small square back garden, and a cook and daily woman to look after it all.

Another house she knew well was Acombe Lodge, 8 Grove End Road, (home of artist George Dunlop Leslie in the 1870s), where she went for piano lesson with Harold Craxton, one of the best teachers in country, and where Elizabeth learned the glamour of Bohemian disorder as the Craxtons dealt with 6 children and various lodgers.  It was a large semi detached house adjacent to Lords cricket ground, the sort of house that had rooms opening out of one another, often rather dark in spite of the French windows in most of the ground floor rooms.  The only part of it that seemed consistently furnished was Harold’s studio at the back, which had 2 concert grand pianos, shelves for music and busts of composers.  A large jar contained something like pampas grass.

Elizabeth’s father was a timber merchant and a womaniser and just before her father finally deserted her mother for another woman, they moved to a small three bedroomed house on Clifton Hill, which faced north and south so that one side was always dark. However it had a sunny garden at the back. In 1942 Elizabeth married Peter Scott, naval officer and war hero, later a naturalist, the son of explorer Robert Falcon Scott and his sculptress wife Kathleen Bruce. A daughter Nicola was born in 1943 and Elizabeth describes walking home in the black out to the Clifton Hill house where there was no heating except for a gas fire in the nursery and an occasional fire in the drawing room when they could get some coal.  The marriage was unhappy and Elizabeth left in 1946, abandoning her baby to the Scott family although they were reunited much later and she became devoted to her four grandchildren and eleven great grandchildren.

Divorced from Scott in 1951, in 1959 she made a disastrous marriage to James Douglas Henry and though in 1964 she was still on the electoral register living with  him at 16 Blomfield Road, together with her brother Colin Howard and author Kingsley Amis, she left him soon after and found an Edwardian villa on Maida Vale to share with brother Colin  and her now husband  Kingsley Amis,  which had five  bedrooms, a  double drawing room  and a study for Kingsley, a bathroom and a kitchen in the basement  plus an octagonal conservatory at back and a large garden with fruit trees that backed on to Hamilton Terrace.  Later they moved to Hadley Wood, where she looked after her three step children and her invalid mother, until that marriage too broke up.

Elizabeth Jane Howard’s  memoirs “Slipstream”, from which some of these quotations have been taken,  show how much of the Cazalet chronicles was based on her family experiences.