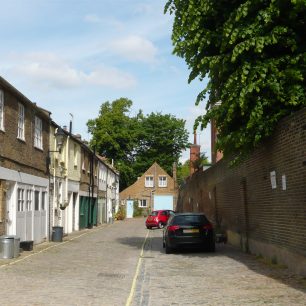 The old track formed the boundary between the Lyon's Estate, and the Eyre Estate to the east. Above is part of the boundary wall in Hamilton Close, 2011
Louise Brodie 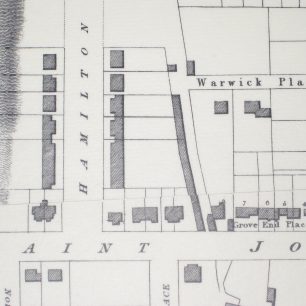 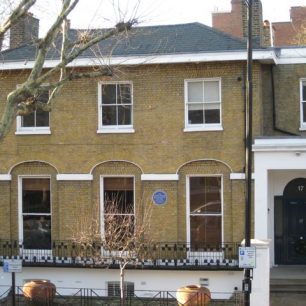 In 1571, John Lyon, a wealthy yeoman from Preston, founded Harrow School. Then a 40-acre farm in Lisson Manor was purchased,  from which any proceeds were used for maintaining a road, Harrow Road, to reach the School from London.  An old track, dating from Elizabethan times, had run from Lisson Grove northwards to Cunningham Place, along Hamilton Mews (now Close) to Violet Hill, through Blenheim Passage to Greville Road and then along Priory Road, up to Kilburn Priory. This old track formed the boundary between the Lyon’s Estate, and the Eyre Estate to the east. Parts of the boundary wall still exist. The Lyon’s Estate covered a strip of land running north-south, and westwards to the Harrow Road.By the end of the 18th century, it was clear to the Harrow School Governors that far more rent could be obtained from building leases, than from letting out the fields of the Lyon’s Estate for farming.

Acts were passed, in 1803, and 1827, to change the leases from 21 years to 99 years, and for the Keepers and Governors of the School to grant these as ‘building leases’.  From 1823, the farm land was being divided up into streets, with one named after Charles Hamilton of Sudbury, a governor of Harrow School.

Hamilton Terrace was planned as a wide street from south to north, from St John’s Wood Road, on a higher strip of land than Egdware Road, and to the west of it.

Entries in the Rates Books start in 1829, and show that, at the south end, there were four adjoining houses on each side. Development of the mews (now Hamilton Close) also began just behind the east side of the Terrace, and up against the boundary with the Eyre Estate. The boundary wall still exists in the Mews, or Close, as it is now.These coach/stable buildings do not appear to have belonged to the (relevant) houses in the Terrace which they back on to, and at that time even stretched further north than those houses being built in the Terrace. By 1830, the four houses became six, and joined to form a matching terrace on each side, hence the name given to the street.

But from 1832 onwards, larger houses were slowly added, some semi-detached, or what is termed ‘double houses’, appeared. All the houses were build as ‘twins’, i.e. detached, but identical. All the houses had extensive gardens behind the ones on the east side, stretching back to the mews, or further north, to the boundary of the Harrow Estate. Those on the west side were also large, and sloped down towards Edgware Road, now Maida Vale.

Building on the east side progressed somewhat more quickly than on the west side, and, by 1837, houses or plots of land for building (27 in all) stretched as far north on the east side as the intersection, Verulam Terrace (now Hall Road). From 1834, the west side had 12 houses until 1840-41, when there was a spate of buildings going as Verulam Terrace (25 houses in all). The terraced houses were built on five floors with two rooms on each floor, including the basement where the kitchen was situated. Servants slept either there or in the attic rooms which might only have skylights. When it came to the larger houses some had the front door and staircases built at the side, which gave larger reception rooms. Others had a central entrance to a raised ground floor, with a room on either side. Raising the ground floor enabled the basement rooms to have better natural light.

Who lived  here in the opening years of this new terrace?

All the occupants in 1836, and 1837, were listed in Boyle’s Court and Country Guide, which described itself as a ‘guide to all the ladies and gentlemen of fashion’.

But, from the Census of 1841, it is possible to see exactly who was living in each house on 6th June, including any servants.
Of the 52 houses then completed, half of the occupiers described themselves as ‘independent’, and their ages ranged from 35 –80 years,  though most were in their forties or fifties.
The other half consisted of:

All the houses had living-in servants. The number seemed to vary according to the number of children, with a minimum of two women, aged between 14 and 25/30, the elder being cook, and the teenager the housemaid. Their places of birth were often outside London, from all over the south of England, and sometimes from the same part of the country as that of the wife of the household.

In 1831 the father of Sir Joseph William Bazalgette, famous for designing London’s sewers, moved into the newly-built number 48 (later 83, and now 17). It was the first of the detached houses on the west side of the Terrace. In the 1841 Census, he is listed together with eight children, and  four female servants. This family decided to move to the country in 1847, and the house was put on the market.

An advertisement for the sale appeared in The Times on 17th and 22nd April, giving  a good idea of the house and the desirability of living in Hamilton Terrace:

Very excellent gentleman’s residence in perfect order and repair fit for the immediate reception of a highly respectable family, admirably situate in the preferable part of Hamilton Terrace, St John’s Wood. Mr Leifchild has received instructions to offer for SALE at Garraway’s on Wednesday May 5 at 12 for I, the above very eligible town villa, being the property of Capt. J W Bazalgette RN and known as 83 Hamilton Terrace. This truly desirable residence contains handsome vestibule and entrance hall, elegant drawing room 21 x 19 feet, with stone steps to lawn and garden, well-proportioned dining-room 19 x 14 feet, library 21 x 19 feet, breakfast room and gentleman’s room, ante-room and water-closet, four light and airy bedchambers and four secondary ditto; well-arranged domestic apartments in the basement, comprising excellent kitchen, butler’s pantry and larder, with capital ales and wine cellars, coal vaults, water cisterns and all other conveniences necessary to a respectable establishment. There is a neat flower garden in front and a handsome lawn and walled garden planted with choice shrubs to the rear. The property is held on a lease from Harrow School for a term of years of which 76 are expired (sic) and subject to low ground rent of £20 p.a. Particulars and conditions of sale will be issued 10 days previous to the sale and may be had at Garraway’s, of Messrs Fladgate, Young and Jackson, 12 Essex Street, Strand; and at Mr Leifchild’s land and auction offices, 62 Moorgate, city, where only cards to view the premises can be obtained and a plan and elevation of the house may be seen.