A house with bow windows 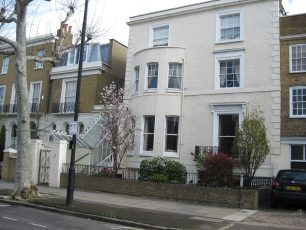 This large and handsome house, originally numbered 19, was built in 1839 and according to the 1841 Census was occupied by a Mrs Reynolds who ran a seminary with 7 pupils aged from 7-25, with 2 servants.  This does not seem to have lasted as the house is listed as being empty in the 1842 Rate Book.

John Boosey, the music publisher, lived here in the 1870s when it appears there was a vogue for bow or bay windows.  A kind of planning control was operated by the Vestry of the Parish of St Marylebone and according to the Vestry Minutes from 1878 – 1890 they received proposals for bay windows from a various houses in the Terrace.  The Minutes record “not objected to”. No 19/48 is not amongst these so was it applied for later?

The house still has the windows also an imposing iron and glass covered way leading from the street up to the front door which would also have needed the approval of the Marylebone Vestry.

At the beginning of the 20th century the occupier was a Lewin C Cholmeley, a solicitor at Lincoln’s Inn Fields who was married with a young son, and who employed 6 servants, all of them occupying the 17 rooms in the house.