You are here: Home>Amenities>Shops and Businesses>Shops in St John's Wood in the 1940s & 1950s 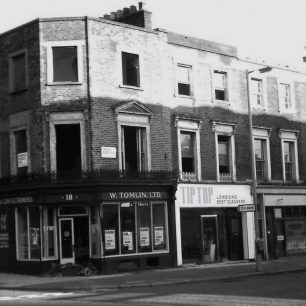 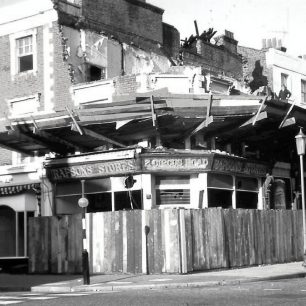 Apart from an occasional sortie to Church Street Market, the High Street area was able to cater for all our needs, and, unlike today, clothes shops and estate agents were nowhere to be seen.

On the top corner of the High Street and Circus Road, was Kennedy Black, a large chemist, where a couple of friends of mine had a part-time job making deliveries on the trade cycle.

Next door was Thumb’s, the newsagents, where I had a morning and an evening paper round. Mr Thumbs’ able assistants were a married couple, Dolly and John, who would be at the shop each morning before six o’clock to mark up the papers for delivery. Mr Thumb had his own method of censorship. If anyone wanted to buy a gangster novel by Hank Jansen with a title such as Dead Dames Don’t Lie, he would take the customer behind the counter, pull out a drawer where he kept the books, whilst looking furtively over his shoulder to see who might be watching. In no time at all, these paperbacks were being tucked into football socks and used as shin pads for a Sunday morning football match in Regent’s Park.

Next was a greengrocer, owned by an Italian family by the name of Salamone. There was always a large display of produce out on the pavement, whilst, inside the shop, hanging from a beam, was a large set of Water Buffalo horns.

Next came The Swiss Café, run by a husband and wife, Maria and Timo, both of whom, unfortunately, have recently passed away.

On the corner of Charles Lane was Mountjoys, a butcher’s shop. On the other corner was Impeys, a shoe repairer, another family business, run by Nell and George; my family always had shoes repaired there. Bearing in mind it was the 1940s, they had an innovative switch under the doormat that would ring a bell. Many times, coming home from school we would tread on the mat and run away, so bringing Nell to the counter looking for the phantom customer.

Next-door was Derbys’, a  family run florist, where shamrock was always available for St. Patrick’s Day. Then came the Express Diary, which, I remember, was the first place to sell yoghurt. It tasted very sour and nothing like today’s fruit-flavoured varieties. Next door was Timothy Whites, a hardware shop.

On one corner of Alitsen Road was The Isaac Newton pub, a pleasant place, and, on the  opposite corner, The Westminster Bank. Next door was another chemist named Courtneys.  Half way along the High Street came a hairdressers named Atkinsons, run by Harry and Jean, who lived next door to my family in the Terrace. The Gents’ barber shop was at the front of the shop with Ladies’ hairdressing to the rear.

Two doors up from there was a rarely found retailer, a record shop, the name of which escapes me. It was run by Stan Wilcox and his brother, Tony, both of whom always seemed to be wearing brown warehouse type coats. This is where I bought my first 78rpm vinyl record.

The Casalinga was further along, a restaurant that came there in the 1950s, now sadly closed.  I think previously this is where Cherrys’ Café used to be.  On the  corner, by Barrow Hill Road was the United Dairies shop.

Returning to the top of the High Street on the corner of Circus Road was a bread shop named Irons, where my Mum worked in the 20s. Next shop down was Barnards, a tobacconist, an old-fashioned shop selling every imaginable item for smoking; on the counter you would find a small swan neck-shaped gas pipe with a permanent flame, thereby giving an instant light for cigarettes.  Whenever my Grandma’s legs were playing up she would ask me to run up to Barnards and get her five Player’s Weights. Can you imagine that happening these days, (fear not, I’ve never smoked)?

A couple of doors down was Whites, the fresh fishmongers, double fronted, and a typical fish shop with white marble slabs stepped down from the rear to the front of shop. Two or three doors along was Hopes.  This was a shop for the ultimate aroma ever to be found in any hardware shop: a mixture of paraffin, turpentine, pieces of timber, floor polish and paint, together with open barrels of vinegar. The moment you entered the senses were assaulted, an aroma never to be recreated. I can still smell it!

A few steps along was Majors, a greengrocers; the oddity with this shop was that somehow it had DC electric lighting, and, after the war, even though there were many power cuts, their lights were still working, always standing out like a beacon, and illuminating the whole High Street. Further along Mac Fisheries,  probably opened after Whites had closed. Next-door was Footrings, an old fashioned haberdashers.  I believe next door down was Hurrys, the undertakers, used by my family but, only when necessary!

Two or three doors along was Williamsons, a double-fronted shop, with liberal amounts of sawdust scattered on the floors throughout, selling high-end groceries. This was the only place I knew of where you could buy the very tasty Eldorado ice cream.  Next door was the Home and Colonial, another grocers, but with prices more in line with the incomes of the time, ably managed by Kathleen Jacobs who could always find an extra ounce or two on top of your weekly rations.

Then came Marriots, a sweet shop, where I bought my first sweets when they came off ration. Of all the sweets on display, I chose to buy a penny packet of Polo mints. When buying loose sweets, Mr Marriot would make a funnel from a piece of paper, then tip the sweets into the funnel from off the weighing scales, so neat. Next came Pritchards, a bakery and cake shop selling gorgeous cream slices.

Further along there was Modern Arts, where Derek and I would go on a Saturday to each buy a penny sheet of plain paper to do some ‘creative’ drawing. I wish I’d kept them! Close by was Elvin Mains, an electrical shop. No such thing as ‘white goods’ in those days, only pieces of wire and light bulbs when needed; if you had no electricity supply at home it was here that you could buy secondary battery cells, recharged for powering your wireless, and, “careful not to spill the acid on the way home!”.

The High Street wasn’t the only place to shop. Just as busy were the shops along Circus Road and the Terrace. Starting at the corner of Aquila Street was Yardleys, an off-license, little used in those days as most drinking was done in the pubs, convenient though for my lemonade and Tizer. Next door was Griffins, an electrical shop, run by the grandfather of Nick Griffin of today’s BNP.

Two doors along was Harris’s, a sweet shop run by two sisters, where they sold the most divine ice-cream made by Lyons, shaped like a mini Swiss roll. A piece would be sliced off the roll to go in to a cornet. I’ve still to taste a better ice-cream!  Then came  the The Post Office, before it moved to Circus Road, and The Co-Op, a general provision shop.

Next door to them was The Duke of York pub, run for many years by Grace and Ollie, who wore a black patch over one eye.  It was standing outside there one Sunday night, with a lemonade in hand, that I saw, in the road, at the top of the High Street, the last barrel organ being played.

On the corner of St Ann’s Terrace, every evening, a newspaper stand was set up by Twitchers, the paper shop, a few yards away near Aquila Mews; the newspapers were sold, from something like an orange box propped up against the pub wall. “Star, News, Standard” was the call to sell the (then) three evening papers. On Saturday evenings, many people would eagerly await there for the latest football results, all brought by speeding delivery vans, racing from one pitch to another.

On the opposite corner was Rapsons, a quality purveyor of food and provisions, inside of which you could find large ornamental tins of teas and coffee beans stacked high and displayed on the shelves around the store; each day in the surrounding streets around the store you would be met with the lovely smell of coffee being roasted by the machine, just inside the window.

Two doors along was Sheldrakes, the jewellers, selling not so much expensive watches and jewellery as clocks and silverware. Next door, during the 1950s, Charkin the doctor’s surgery opened.  On the corner of Kingsmill Terrace was a bread shop named Skares.

Across the road, on the corner of Cochrane Street, a coffee bar was opened, fashionable at the time, serving espresso coffee in the, then, obligatory clear Pyrex cups and saucers. Bents was a large double- fronted shop, more than just a haberdashers, selling bedding, curtaining and general fabrics; this is where we bought our fireworks. Brocks fireworks were the best, making the best Roman candles and they also made the loudest bangers.  In those days, no age restrictions were in place so we could spend all the money, collected from our ‘Penny for the Guy’ sessions, on fireworks.  Our Guy would then eventually be placed on top of the fire and, unceremoniously, burned on the stack of wood we had been busily assembling from Aquila Street debris over the previous weeks.

Across the alley way was a club named The Barbarena which in the 1920s and 1930s had been Tom Newmans Billiard Club. (I still have a trophy from there won by my Dad.) For a while the property lost its way, occasionally hosting jazz groups, bingo etc., It was eventually rescued, and is now the Richoux restaurant. Next door was a florist’s run by the Salamone family.

Next to the Isaac Newton pub was a small family run shoe repair shop named Chams, although   the actual property is now incorporated into the Cafe Rouge.  Next door was Crossons, the butchers, where the owner, Arthur Crosson, would always find that little bit extra to bulk up your weekly ration. Across the road was, and still is, the Gammon Rasher Café. This business stands out above all others because it still remains unchanged, and full marks to the owners, past and present, and deserve to be visited by everyone possible for the occasional “cuppa and a bacon sarnie”.

Pikes was a shop selling an assortment of goods, being the closest to school where we would buy a penny ice lolly.  No matter what colour you bought they all tasted the same.  I think tap water would have been the best description.

Next door was Reids, a small family-run general provision shop. Every Thursday afternoon, on early closing day, Reg, the owner, would be off hotfoot to the afternoon dog racing at Stamford Bridge.

The Drill Hall was always a place of some mystery. During the war, it was occupied by a small number of regular soldiers, where, at the front of the building on Allitsen Road, there was general accommodation. To the rear, backing on to Charles Lane, was a large hall, hence the name. Post-war, territorial troops took up position, and then, in the 60’s, it became a dormitory for US Marines who were attached to guarding their Grosvenor Square Embassy, together with several other buildings around the West End.  It has now been converted into apartments.