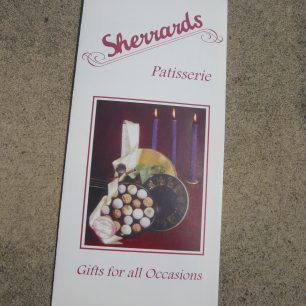 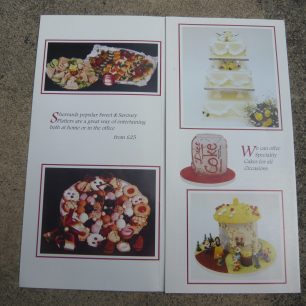 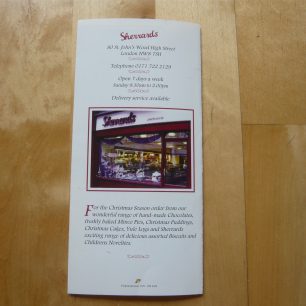 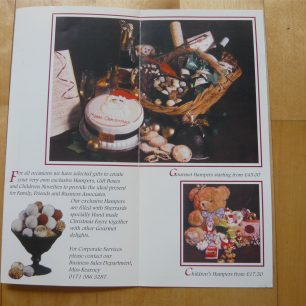 A life in bakery

Pat opened her shop Sherrards at 80 St John’s Wood High Street in 1976, but she had been involved in the bakery business long before this date. “It’s in the genes,” she said, “my grandfather opened his first bakery 100 years ago”. He left his Russian village as a boy to go to town to work in a bakery. Pat was in her father’s bakery every Saturday during school years, and when she was 16 she opened another shop for the family. “You have to be interested in the business to do well. Quality is so important”. Pat loved the shop  – she couldn’t do without it. Her niece in America had just the same feeling for the bakery trade and worked at weekends when a student, but is now a lawyer.

Pat’s grandfather built up a wholesale business selling the flour and other ingredients, giving his sons each a shop provided they bought the produce from him. Later they bought from larger wholesalers. Kosher ingredients were used  and there were weekly and daily deliveries from greengrocers and specialist firms for fresh produce as larger varieties were demanded from their customers.

Sherrards had several shops round north London, and in fact Pat’s brother Lawrence still runs one in Hampstead Garden Suburb. At one time the family had a shop in Temple Fortune which sold the goods which had not shifted elsewhere.

Opening in St John’s Wood “My father said, you will just go in in the morning, leave the orders and then go back in the evening to count the money. Well, I was there seven days a week for eleven or twelve hours a day!” Clientele were local but also came from other parts of London and other parts of the country.

In 1976 business was 60 percent Jewish and then the Arabs started coming to the area, particularly in the summer when they came for medical treatment at the Wellington Hospital. Londoners tended to go away then, so takings evened out over the year. There was a large Greek community right through from the 1980s. They were very loyal and friendly customers.

Pat started with patisserie, cakes and bread. Her father phoned to find out how it was going and heard that there was a queue outside the window, of people waiting to buy from the butchers Bifulco next door. When he told her to get them to move away she replied “No, no, they are coming in here to buy things while they are waiting!” It wasn’t till the 1980s that the lunchtime take-away trade started to change things. Then Pat added sausage rolls, pizzas and sandwiches to the repertoire.

Pat’s bakers were generally Swiss or Polish like Frank. John was an Italian from Malta. He was the only one who ever used a recipe and these he followed meticulously. The others did the baking through their knowledge and experience. Emeric made marvellous birthday cakes, he was from Romania and worked well into his eighties.

Some doughs would have been prepared the night before, down in the basement, where a lot of the baking took place. The chill room was down there too. At one point they got an electric bread making machine but not all the bakers used it, preferring to roll the dough by hand. They were known for making a lot of miniature danish pastries, donuts, a large variety of petit four, croissants and other interesting small products. Sandwiches were made upstairs. All the produce would be tastefully displayed. Pat had various manageresses from time to time and many girls to serve in the shop, Irish, Nigerian, Russian, all with different personalities.

Pat would arrive at the shop at 8am every day and the some of the staff had already been there since 6 am. Bifulco next door also had staff arriving early who bought items from them. They made schnitzels, and joints of meat with stuffing and sausages, one of the first butchers in the area to add value in this way. Rolls Royces and Bentleys parked outside (there were no traffic wardens then) and Bifulco customers from far afield helped the takings in Sherrards.

Pat would take phone orders for the following day. They might deliver different breads or cheesecake or vol-au-vent. She was asked to supply cakes for special occasions. “I remember Cameron Mackintosh’s opening party for ‘Cats’” she says. “We did a huge black cat in cake and got the electrician to give it flashing eyes!  Then we made a huge chandelier with drops for ‘The Phantom of the Opera’. When we made cakes for a Virgin advertising shoot, the photographers’ lights made all the icing melt!” Of course they provided wedding and anniversary cakes for many of the celebrities living in St John’s Wood. Stag parties and hen parties brought up strange requests for sexy shaped cakes too.

In the early days Gloriettes was really Pat’s only competitor in St John’s Wood. Latterly Richoux and Maison Blanc have arrived. As time went on, Pat wearied of having no holidays, other than a quickly snatched day here and there. When her lease expired at the end of 2005 she thought the time had come to retire. The children’s shop Igloo is now trading on her premises. The High Street has more fashion stores and estate agents these days. Pat still loves the area however and lives locally.