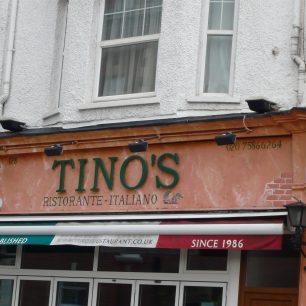 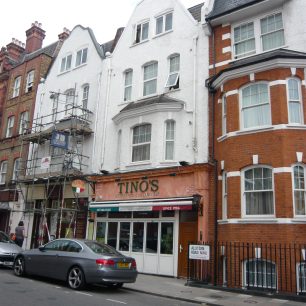 Tino first came to 57 St John’s Wood High Street when he ran Bistro57 next door to Kent (then Scanlons), the butchers, on 1 October, 1984. It was part of a franchise chain, Bistro Operators Ltd, and they specialised in fish. When Tino arrived, he put the fridge with a fish slab in the window so that people would stop and see what was available. It was an instant success, and made for very good business. He bought fish from Billingsgate Market: lobster, crab, halibut, speciality fish, shellfish, and so on.

Tino did very well at Bistro57 and then saw an opportunity in an empty shop at 128 Allitsen Road. At various times, it had been a famous Hungarian bakery, a Chinese restaurant, Wat House and the Fortuna Garden. It had a staircase going up from the main space to the mezzanine, which could be hired for private events.

Tino bought the whole building in July 1986, converted the entire ground floor into Tino’s Restaurant, removed the staircase leading up to the mezzanine, and made the three floors above into living accommodation.

Tino’s has been refurbished a couple times, most recently in 2004, when the bar was moved to the back of the restaurant; they changed the shop front, so that it could be opened fully on to the street, and exposed the brick on the walls. Originally, the clientele were  mostly senior citizens but many more young people now come to dine. They can seat 90 for a special occasion at a push, but 65-70 is good. They are usually full on Test match days. Many celebrities, past and present, have dined at Tino’s.

Tino is up at 3 am and goes every day to the three wholesale markets, Billingsgate, Smithfield and Nine Elms. He knows the traders and they know him well, too. They now open for lunch on Friday, Saturday, Sunday, and every evening of the week.  Tino feels St John’s Wood has lost some of its atmosphere with far more chain shops and it used to be more of a village, with independent and individual shops.