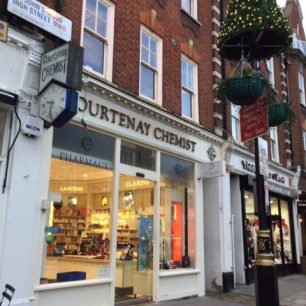 Courtenays in the High Street 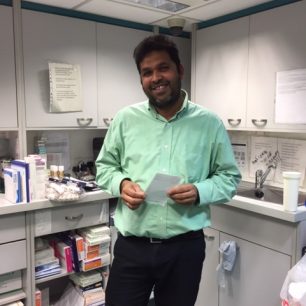 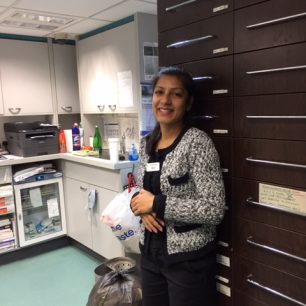 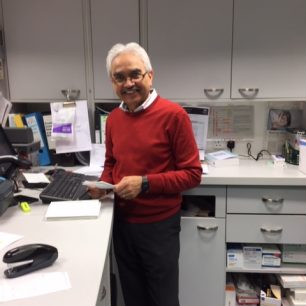 Harish was born in Uganda, and as further education in that country was limited, he was encouraged by his father, an industrial chemist,  to apply to do A levels in England. He arrived here, as a teenager in 1970, knowing nobody. He enrolled at Loughborough Technical College  to do the course in one year instead of two. It was extremely intense studying, but he persevered. He was staying in digs with a Polish couple, a small room with a bed, and just one bath a week! He planned to go back to Uganda for the summer holidays.

Just then, Idi Amin told all the Asians that they had 90 days to leave the country. Meanwhile Harish had applied for the pharmacy course at Chelsea College, London University. Harish’s great grandfather had settled in Uganda so it was a great sadness  for them all to leave in such circumstances, with just one suitcase and £50 in sterling. They took clothes and practical items, leaving behind all the photographs and family mementos.

In September 1971 Harish’s family arrived in London.  Leaving Dhimant, (Dee), his younger brother, behind with Harish, his parents went on to India. The Ugandan Asians had British passports already and they were given financial help by the British government, but Harish’s father would not accept this, as he had paid nothing in taxes previously.

The Asians had traditionally been traders in East Africa, owning their own businesses, and the economy faltered without them. Over in England, they tended to run corner shops and live in accommodation above.

Harish went on with his pharmacy training, and worked for some years in Roman Road, East London with its street market. Soon he became engaged to the girl of his choice and they got married in 1978. They bought a house in Chessington, where a cousin was already living.

By 1980 Harish and Dee had bought their first pharmacy in Clapham SW4. Dee took over that pharmacy, while Harish continued working in East London.

In 1981 they bought Collins Chemist in Church Street NW8. Harish knew that a market street would be good for business.  The brothers felt that they had been conned by the previous owner over the purchase price of this premises. Dee moved to work there, and although worried at the beginning, he has built up the business over the years, increasing the turnover.

In those days you also had to pay one third of the turnover as goodwill, plus the cost of the existing stock. Part of the goodwill was to introduce you to the doctors. And the pharmacists will make themselves known to the doctors and their receptionists. Later on, the patients had a choice of where they had their prescriptions dispensed, so it became important to be on good terms with the local surgeries.

In the early 1980s there were no computers to generate prescriptions, so the only records were the doctors’ hand written notes. Neither were there as many generic medicines then. When the patent expired, the drug could be made more cheaply without the brand name. Large sums could be charged for the cheaper drugs. Also, Mrs. Thatcher’s government brought in a ‘black list’ . Previously for instance, cough medicine and vitamins could be given on prescription, at the expense of the tax payer.

For the pharmacies, nationally, supplies could be delivered twice a day from the wholesalers. But the manufacturers might come around and say that they could undercut the price. There are stories of inducements being given. There are times when the pharmacies are in competition with the doctors. For instance in the first year when pharmacies were able to give flu injections, the doctors were wary.

In 1988 the opportunity arose to buy both the St John’s Wood Pharmacy and Courtenay Chemist at each end of the High Street, which had been owned by the same proprietor.

The customers were quite different in each shop. Harish had found people very down to earth in East London, being blunt, but respecting each other. In St John’s Wood the people were very demanding. The Pharmacy at number 142, with the eagle statue above the door, was more straightforward. At number 3, people saw the expensive brands of cosmetics and perfumes at the front, and might not even realise that there was a dispensary at the back. Harish had to learn the customers’ needs and build up his staff to give a personal service to all.

In the 1990s the dot.com bubble caught people out and incomes and properties fell in value. The High Street was hit hard. The St John’s Wood Pharmacy continued to do quite well. Courtenay not so well. Harish has always made it a policy to be honest with a customer, not to suggest they buy something which is not needed, not to buy supplements which will not help them. This is much easier when you know your customers, see them regularly and can understand their difficulties.

The electronic systems of today, which can happily speed up information and treatment at times, can be exploited by unscrupulous people who provide flyers looking official, where they offer drugs at cut prices delivered direct to the patient. Even if it is not a scam, it can be very dangerous to obtain medication online,, when the quality and strength of the drug may not be verified, and the needs of the patient are varied.

When Harish started in the High Street, he would compound some of the medicines for the prescriptions himself. He loved doing this, for which he was trained and legally licensed. Eventually the authorities stopped this happening in the UK, saying that they could not guarantee the conditions in which the compounds were being produced.

Now in St John’s Wood High Street, both rent and rates are going up significantly, and it is not clear how this will affect the community and the street in the years to come. Then there is the effect of arrangements with the European Union, though ministers say that medical supplies will be guaranteed.

Pharmacies in the past were mainly independents and they had the proprietor pharmacist working there every day for years, getting to know their patients really well, so that they could make informed and holistic observations leading to more appropriate advice and referrals. Now however, there is real financial  pressure on the small pharmacies and more and more are ending up closing down or selling to the multiples.

As remuneration, the pharmacist gets a prescription cost, plus 10%, and a dispensing fee and container allowance. The cost of the drugs can be squeezed, and it is possible for the wholesaler or manufacturer to create a shortage. Very often the pharmacists have to spend a lot of time phoning around because they cannot get the specific drug to fulfil the prescription when it is needed.

Pharmacies now have to have a much greater business focus, in order to stay viable. This often means a higher turnover of staff, which is losing these extremely valuable local and personal relationships. The pharmacy used to be the backbone of any high street and was recently judged to be the third most valued by the public (after banks and post offices).

When you collect your prescription from Harish’s shop now, the yellow and white striped bag in which the drugs are given to you has five addresses on it. Three are in NW8; one is in Clapham SW4 and one in Mitcham CR4.  In order to call your business a chemist, like Courtenays, you have to have a qualified pharmaceutical chemist at its head. The history of the distinction between chemist and pharmacist goes back about 200 years to the days of alchemy.

In each case however, Harish is concerned that they should give a good personal service, and sensible advice, whoever the customer might be. And he hopes that this will continue over the coming years whatever happens in the bigger picture with changes in society, in Europe and the National Health Service. His daughter is a doctor and his son is an accountant. He feels that his generation were lucky, in that, if they were prepared to work hard, they could make a life anywhere in the world. He tells his children to put something aside for the future, as you can never know what will happen.