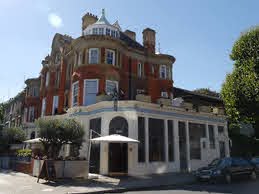 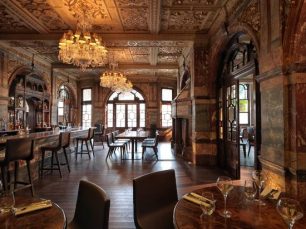 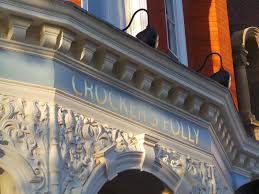 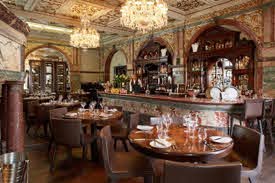 This magnificent bar and restaurant in Aberdeen Place has an unusual name which arises from its history.

Frank Crocker was born in Newton Abbot in Devon in 1863. His father Francis became an innkeeper at the Dolphin Inn, Exeter, where Frank, in 1881, was a furniture dealer’s assistant. Ten years later Frank was in London where he married his wife Agnes in 1893 in St Marylebone.

The hotel, The Crown,  was built in 1898, designed  by the architect Charles Worley. The “grand saloon” has a huge marble fireplace, elaborate pillars and gilded beamed ceiling, with multiple different types of marble facing on the walls, and the bar, giving a hugely extravagant impression. Originally there was a billiard room and a “ladies only” lounge.

The Crown’s nickname became “Crockers Folly” as Frank had started this hugely extravagant and ornamental building believing from a tip off that the new railway, constructed originally to bring coal from the Nottinghamshire  mines, would terminate there. In the event, the line went further to the east and south so that it terminated at Marylebone station. The first regular passenger trains were started in 1899.

Charles Worley was an architect with a previous career designing buildings in Marylebone, some of which still survive today. But nothing was on the lavish scale of The Crown. How did the son of a Devon publican manage to raise the money to build a speculative hotel in this ornate Renaissance style?

In the 1901 census, Frank, the licensed victualler, with Agnes and Francis his father, were living at The Crown, and they had two visitors, and ten servants for the pub trade. The myth came about that Frank was ruined and filled with despair at the final route of the railway, and that he committed suicide by throwing himself out of an upstairs window. In fact he died of natural causes in 1904. The subsequent landlord Charles Durden, however, did kill himself in this way.

The pub appeared in many films including Georgy Girl and Reds. In 1987, the pub’s name was changed to Crockers Folly. It was closed in 2004, in need of urgent repair. After outline planning permission, work began in 2014 on the conversion of the upper floors for apartments and the restoration of the ground floor bars and restaurants.

Now it is owned by The Maroush Group, the Lebanese family chain. You can have a drink on the outside terrace, screened by ancient olive trees and flowering plants. Meals inside can be taken in refurbished  marble glory, and The Lord’s Dining Room can be hired for private occasions. It is an excellent opportunity to experience ebullient design and friendly service.