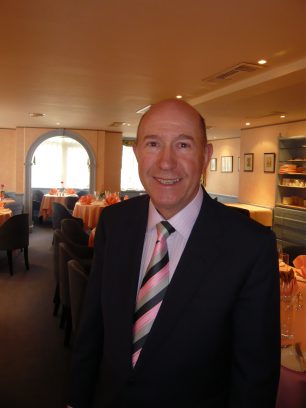 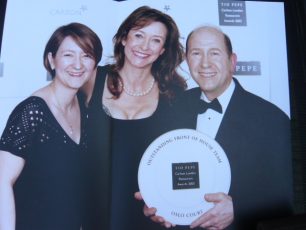 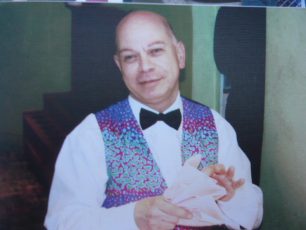 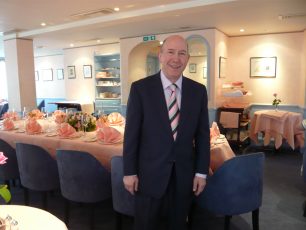 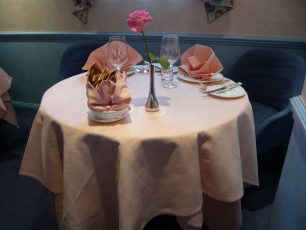 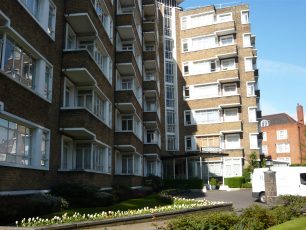 Tony Sanchez has been running the restaurant at Oslo Court for nearly thirty years and he welcomes his customers as if it were his own home.  Tony was born in Northern Spain, went to Geneva to train as a chef, and then came on to the UK where he had an uncle in Bournemouth. Arriving in 1968, he got married a year later and they have three daughters. After experience in restaurants and nightclubs in various parts of London through the 1970s, (when food was generally poor), Tony and his younger brother Jose decided to take a chance and bought the business in Oslo Court.

A block of flats may seem an unlikely place for a successful restaurant today, but of course many such blocks were built with this facility. Starting as a members club, and going through many stages, Oslo Court is one of the few remaining today. The block was designed by the architect Robert Atkinson in 1937-38 (he also designed Stockleigh Hall and Regency Lodge). There are 125 one bedroom flats on this narrow site between Culworth and Charlbert Streets and balconies have views over the Park. It is not known why Oslo Court has this name. It is rumoured that Norwegians stationed in St John’s Wood during the war used to live and drink there.

Walking in from the front lobby now, one sees the lush blue carpet and soft chairs round the spotless pink cloths on each table; the single rose in a silver vase, and melba toast; swagged curtains on the windows and modest paintings on the walls. The bar has a prodigious array of bottles – and a machine for polishing the glasses. While we were there, Tony was taking bookings all the time. He rarely needs phone numbers as most of the reservations come from people he knows, whom he considers to be his friends. Bookings may be made for a year ahead and many special family events are catered for. They make lots of birthday cakes.

When they started in 1982, they did Sunday lunch, three courses with roasts for £7.50, and when they became known, they had queues round the block for several sittings. Tony’s daughter, Maria, as a child, used to take the coats (including many furs in the 1980s). They didn’t have tickets then, and she had to remember who they belonged to. She got lots of tips!

These days, apart from Maria, her sister Masiel takes a hand, though her main work is running a children’s clothes shop in Bristol Gardens, Maida Vale. Maria herself does the book keeping while looking after her three children as well. The digital age has streamlined the process of dealing with separated credit cards, cheques and carbon copies of everything. The third sister Monica lives and works in Milan. Masiel’s husband David is in charge of the front of house area, and the wine. Tony’s brother Jose, and his son Jose, run the kitchen, so are responsible for getting in the food. Maria’s mother and aunt help to organise the cold starters and the dessert trolley.

The staff stay for a long time. Neil, in charge of the desserts, has been there longer than Tony. But about six years ago, several people came up for retirement all together and there was an immediate need to replace them.  Staff arrive from Spain and Italy mostly – they do not get applications from the British. Sometimes it is hard to get good young people. New waiters follow an experienced person in an informal apprenticeship. People from catering school must learn how things are done in this particular kitchen. They use very good produce, bought daily from the wholesale markets at Billingsgate, Smithfield and Nine Elms. The printed menu has old favourites, proven through the decades, and then there is a great choice of specials from the markets that day.

The children of the clientele who were coming thirty years ago, now book tables in their own right. Many older customers go for quality in wine and food, rather than quantity. They know their food and are selective. A meal out can be expensive with VAT at 20% and charges on the credit card. Here, there is a set price both for lunch and for dinner whether you have one course, two or three. Food culture has changed with families today eating and drinking at home more often. If they have take-aways, then the children do not learn how to cook. But Tony is proud that his granddaughters are learning.

Business clients eat there, in the comfortable, luxurious conditions. Japanese, Asians, Muslims as well as Americans and Europeans reflect the variety of the diners. They will do vegetarian meals, gluten free, Kosher, anything you like. The restaurant has won many awards.

Recently David and Samantha Cameron came to eat at Oslo Court, which was widely reported in all the newspapers.

Tony bought a long lease in 2002, and wants to make changes to the outside patio. Of course this has to be acceptable to residents in the block, and the planning authorities at the council. Oslo Court is a Grade 11 listed building. They are trying to improve the look of the kitchen entrance at the back.

The strength of the business is that it is family run and they are all used to hard work. They can come in and deal with any unexpected issues which arise. Tony has always put his hand to anything in the practical way, such as screwing tables together to accommodate parties of varying numbers, and writing out the menus in perfect calligraphy. He reckons that he has served about a million and a half meals since he started at Oslo Court. But his main influence is that he is a wonderful host, giving a friendly and welcoming ambience to his restaurant. He sits down with diners, his friends old and new, and possibly has a liqueur with them. He signs get-well cards for regular customers in hospital, and knows about the lives of so many of them. His personality pervades the restaurant.

by Louise Brodie and Judy Hame