You are here: Home>Amenities>Shops and Businesses>Street cleaners and waste disposal 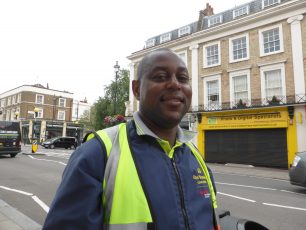 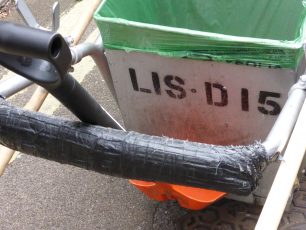 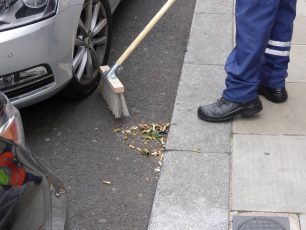 Careful round the car!
Louise Brodie 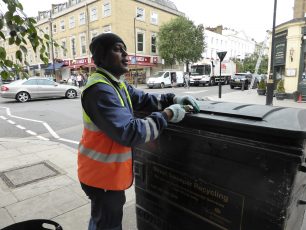 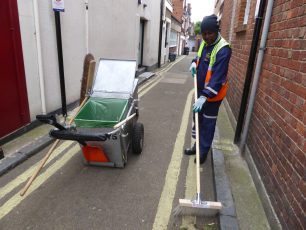 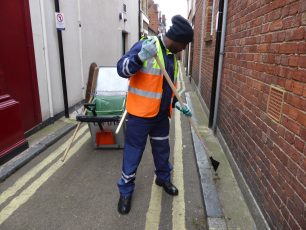 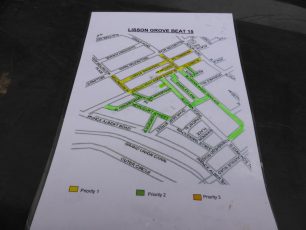 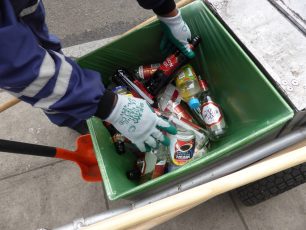 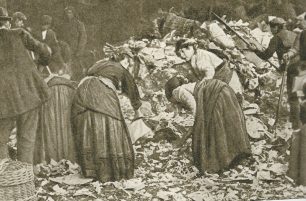 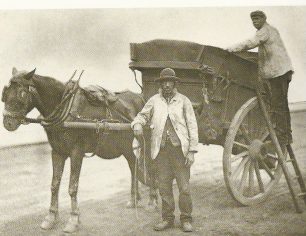 7am and Howard Richard is sweeping the High Street and Circus Road, having started his work at 6am at the depot behind Lisson Grove. Howard is cheerful and friendly, and waves at the regulars who are about their business at this time in the morning. When we met he had a new uniform and so had misplaced the key which is used to open the big bin at the crossroads. He came originally from Jamaica and after agency work got this job with Veolia, the firm which keeps St John’s Wood clean and pleasant for us to live in. “People notice if the streets are not swept,” he says.

The cart he pushes moves easily on its rubber tyres. Howard has customized it by wrapping the handle. “It makes it easier to push, and the metal gets very cold in the winter”. This is his cart, numbered 15 to go with number 15 beat. His manager Taffy Hughes has given him this beat especially because he is a good worker and a pleasant personality. “I like my job” says Howard, “and I take a pride in doing it well. There is a good way to do things, and a bad way.”

The cart has two containers, one for the rubbish which Howard lines every time with a plastic bag to fit, and the other is for miscellaneous personal items, including antiseptic gel for his hands. Two brooms of different sizes are stretched along the top, together with a shovel and a long implement to scrape the weeds out of crevices. People clearly go to smoke in Cochrane Mews where there is a large scattering of cigarette ends. The cobbles foster the weeds growing there too.

On the main streets Howard sweeps the pavements and the edge of the road where rubbish collects. He has to be very careful around parked cars. “One time a man got very angry with me. ‘You touched my car!’ He wanted to fight me. ‘I’m very sorry’, I said, ‘I’m sorry, I couldn’t help it. There is no damage’. It was a nasty incident though.” Chewing gum has to be chipped off from where it is stuck to the pavement. All the sweepings are shovelled into the bag on the cart.

In the High Street litter bins are situated at frequent intervals along the road. They have one side for general litter and another for recyclable material. Howard opens them with his key and lifts out the interior containers to tip into his cart. It may be dirty things like used coffee cups, or papers and bottles. If there are lots of bottles they have to be transferred by hand. “A big load will break the bag if you empty them all in at once”. Broken glass is a problem. St John’s Wood has many trees, and when the leaves are falling in autumn it makes for much more work for the street sweepers. When Howard’s bag on the cart is full, he ties it up securely and then puts it in the big container on the crossroads for the Veolia lorry to pick up later.

Along the High Street you can see a definite demarcation line on the pavement between the area which is council responsibility and that which is closer to the shops and therefore their responsibility. It is noticeable that weeds are growing there, and it is dusty outside some shops where, unlike Howard, they do not take a pride in the area outside their doors. Different dust carts pick up special shop waste.

Having started at 6 in the morning, Howard  works till 2pm. He has a break at 8.45am and another later on. His beat covers St John’s Wood Terrace, half of Allitsen Road, Newcourt Street and around, (see map). He would like to be taken on for a recycling job with Veolia, as this pays more. But in the meantime, we are pleased to have him working for us!

Taffy Hughes is Howard’s manager. He started 23 years ago in Bethnal Green, a part of Tower Hamlets, for another waste management company. Veolia has the contract today for Westminster and for several of the other local authorities. One major difference is that there was no recycling in the early 1990s. It is a question of adapting to the new methods and educating the public. People don’t change habits easily and they need to know why recycling is so important. Sorting waste at source needs to be encouraged. The 17 sweepers in Taffy’s area go out with the plastic sacks both for general rubbish and separate ones for the recyclable material.

Taffy has just taken delivery of a new caged vehicle specifically for collecting cardboard from markets such as that in Church Street. He also has mechanical sweepers for main  roads such as Park Road and Abbey Road. They do power washing on a  channel basis. However, if the main roads are too busy with cars and people, as in the Edgware Road, they adapt, and have to use the men to clean up there.

Veolia is a global company (French)  working in water services, transport, and logistics as well as in waste management. They do liquid and solid collections of waste, hazardous and non-hazardous. “It is about turning waste into energy”. Taffy arrived in Australia for his daughter’s wedding and one of the first things he saw was a Veolia van in the car park!

Taffy has total control over his budget, weekly, monthly, annually, which covers equipment, the men’s uniforms, everything. He organises holiday and sick leave and deals with day to day incidents. He has two foremen and 23 operatives which include vehicle drivers, and loaders who collect things like beds or old washing machines, and builders’ waste. He has excellent relationships with the unions. Veolia is a good company to work for, with a pension scheme which the employee can join and pay into, added to by the company. He has lost a few permanent staff in the last five years, six going back to Poland and two returning to Portugal, but staff turnover is not high. New staff are taken from an agency and may become permanent later, as Howard did. Training involves an induction, teaching how things should be done, and how the operatives can keep themselves safe. There are special arrangements, for instance, around finding needles. Sweepers carry blue tweezers to pick discarded needles up, and put them into a safe box which is then locked. When and where they were found is reported to Taffy and then to Westminster Council.

Taffy has just visited the Management Integrated Recycling Facility. At this depot, different types of paper, newsprint, colour, cardboard are separated and plastics of many different sorts too. Machines sense which category they should be sorted into and then they are baled and crushed and sold at competitive prices. The profits are now an important part of the recycling system. A couple of years ago an organized visit for local residents was arranged to another Westminster depot down near the Thames estuary. It took up a huge area. At this place vehicles arrived bringing glass, bottles etc. clear or coloured, and waste from demolished buildings. This was loaded onto an enormous conveyor belt which travelled along slowly and the different materials, glass, concrete, metal, etc were picked off at different points  to make huge mountains of waste, all dealt with separately and appropriately. This vast complex was controlled by one man in a little cabin at the top of the conveyor. This is the modern way of dealing with our waste.

Dust mounds marked suburban London in Victorian days and money could be made in this way. Domestic refuse, which included everything including rags and bones, was collected by contractors, who were paid for the service. They would sell the textiles and bones on to the glue, gelatine and match factories. Kitchen leavings were put into a bucket and a trader came to collect and sell it on as hog wash or pig swill. Coal dust and ashes were collected too, and this was kept separately from other household waste. Open fires in the home meant that filthy paper and other refuse could be burnt there instead of being removed.

In 1875 the Public Health Act meant that households could have their refuse collected for free, instead of the insanitary methods in use previously. This was the beginning of the great progress leading to the way we deal with our waste today.

In St John’s Wood, street fairs such as the Classic Cars event in the High Street, and Test matches and Twenty20 cricket at Lord’s mean that Taffy has to provide extra sweepers for the litter which is left behind. New Year’s Eve can produce tons of glass! In autumn our lovely tree lined streets drop lots of leaves. This causes extra work but the leaves are recycled and turned into mulch. In winter grit salt, which is very expensive, has to be provided. The salt bins are topped up by the council. Taffy watches the forecast on a 24 hour basis so they can lay grit before the snow comes. It will then melt from underneath which is quicker. They also have hand held snow ploughs which can clear the top snow. They prioritise the hospitals, schools, police stations and such like.

All these complicated services are a far cry from previous days. They are designed to keep St John’s Wood an attractive place and a healthy one in which to live. “We may not notice our street sweepers on a daily basis, but we would, soon enough, if they were not there”.