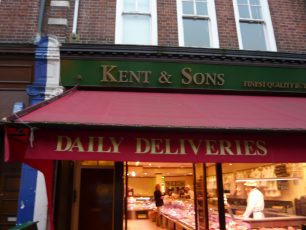 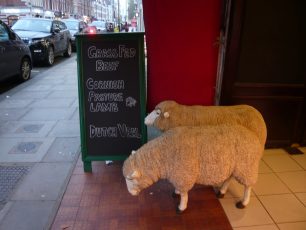 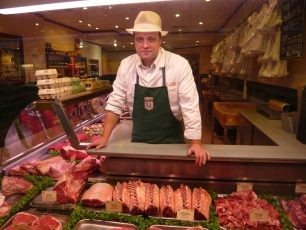 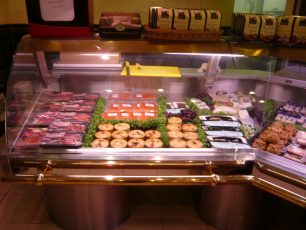 Inside the shop
Louise Brodie 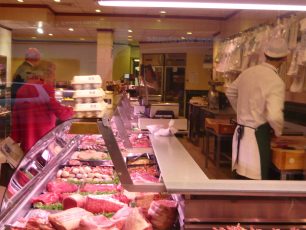 Scanlans moved to 59 St John’s Wood High Street in 1972 having previously had their premises opposite, on the corner of Charles Lane. Number 59 had been MacFisheries and the safe is still there, being too heavy to move. Kent and Son took on the lease in 1986.

“If you have only one piece of meat in the window, make a display of it”

“Point the best side towards London”

Kevin joined in 1989 and had been working there on and off since he was ten years old. Kevin goes to Smithfield at 4.30 am every day and buys from the same wholesalers. They also buy beef direct from Scotland, often from the prize beasts at the Keith show. The winning rosette will be displayed next to the meat. The beef has already been hung for 10 days, and they will hang it for another 7 before vacuum packing it to keep it red and bright, which is what the customer likes.

Poultry comes direct from Black Mountain Foods in Herefordshire. They make their own sausages and barbecue sauces, and are thinking of making their own pies too. These are bought in at present. Kevin can buy more unusual meat by request such as kid goats for the Greek Orthodox Easter celebrations; plus ostrich – and snake, which sells wholesale for £70 a kilo!

Customers have changed over the last 25 years, having been very much the moustachioed gentlemen and fur coated ladies previously. Customers are more varied now, of many nationalities. And people coming for the cricket at Lord’s may take meat home with them, veal for a resident of Manchester for instance. Housekeepers in the big houses are purchasing meat for numerous staff as well as their employers. Meat has been bought and vacuum packed so that it can go safely through the aeroplane checkpoints to its final destination overseas. So customers may now be local, or come from far afield.

Kevin is looking for more customers and engages in promotional efforts such as Facebook, advertisements in the St John’s Wood Society magazine and elsewhere, and donations to local charities.

“The customer is seldom right, but let them leave the shop feeling that they are.”

“Be as courteous as you can. Say hello and goodbye… but make sure the till rings in between.”

“To a butcher, Christmas day is the best day in the calendar, as we don’t have to do all this hard work for another year.”

On cutting yourself “ Only 9,999 to go until you finish your apprenticeship.”

“One day you will think you know it all, but by the end of it I will prove you know nothing.”

by Louise Brodie and Judy Hame