You are here: Home>Arts>Architecture and Architects>Sir Joseph William Bazalgette, C.B. 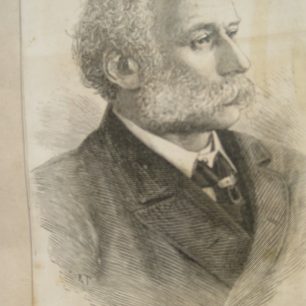 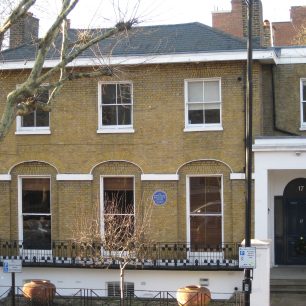 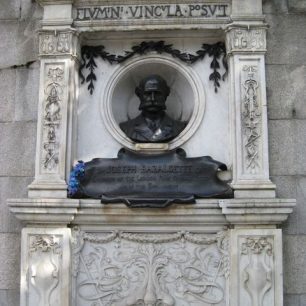 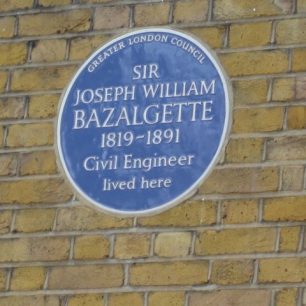 Joseph William Bazalgette, known as ‘Drainy Jo’, was born in Enfield, in 1819, into a French family which had taken refuge in England from religious persecution in the mid-eighteenth century. He was the eldest of eleven children, 7 boys and 4 girls.   When he was eight his parents bought the newly-built detached house in Hamilton Terrace (originally no 58 but later re-numbered no 17).  Joseph was privately educated, and, in 1827 was articled as pupil to Sir John MacNeill, C.E, where he was employed on railway works and sea embankments in Ireland. He later supervised part of the construction of  the Thames Valley Canal.

In 1845, the year he moved out of the family home in Hamilton Terrace when he married Maria Kough, the daughter of a J.P.,  he started his own practice at Great George Street, Westminster  – in the same building as Robert Stephenson.   The great railway boom gave him lots of work, presenting plans to Parliament within limited time scales. As a result his health broke down, in 1848, and he was forced to stop working for a year.  At the same time his father put the family home in Hamilton Terrace on the market   (see Early History of Hamilton Terrace)  and he and the rest of the family moved out of central London.

Joseph remained in London and, in 1849, became Assistant Engineer  for the Metropolitan Commission of Sewers, then, in 1852, he was promoted to Chief Engineer.  At this time Lord Palmerston and the General Board of Health were considering alternative sewage systems.  In spite of opposition from some of the Commission, in 1856, the newly-formed Metropolitan Board of Works appointed him Chief Engineer. His job was preparing new designs with their estimates.

At this time some London water companies were taking water from the Thames at Battersea Bridge and one of these companies was responsible for 6,000 deaths from cholera.  During the period from 1858 – 1865 Joseph’s plans were carried out, costing £4,000,  for which he was awarded the Telford Medal by the Institution of Civil Engineers.

Other important works designed by him were the Victoria Embankment, the Albert and the Chelsea Embankments which were reclaimed from the river, at a cost respectively of £1,250,000,  £1,020,000 and £337,000.  One ‘nobleman’ tried to prevent these drainage/sewerage works because the embankment would cut off his town residence from access to the river!

His overall drainage scheme consisted of three parallel sewers, one ‘high level ‘   (along the southern slopes of Hampstead and Highgate),  a ‘middle level’ along Oxford Street from Piccadilly and a ‘low level’ starting at Chiswick, reaching the river at Battersea railway bridge, under the Embankment and up Queen Victoria Street into the City.The Tower Bridge would have been another of his successes except that the City Corporation insisted on their right to do it themselves.

As a results of these achievements, in 1871, ‘Drainy Jo’ was created a Companion of the Bath (C.B.)and,  in 1874, a Knight Batchelor.  During this time he also designed new streets, subways, artisan dwellings, and the lighting of the Victoria Embankment. He also investigated the strength and condition of eleven of the bridges across the Thames, prior to their being purchased and opened to the public.  He designed new bridges at Hammersmith, Putney and Battersea.  Another achievement was the raising of all the wharves along the banks of the Thames, thus preventing damage to properties by high tides.

Sir Joseph is described by his contemporaries  as being small in stature- possibly an inherited trait since the family originally came from the Cévennes region of southern France where the people were, and sometimes still are, often short and stocky.   He had indifferent health, also running in the family,  and  was of a modest disposition.

Sir Joseph was Chief Engineer of the Metropolitan Board of Works for 32 years. But, in 1891, he died at his home St Mary’s, Wimbledon after complications arising from a heart problem, exacerbated by his falling from his horse.  He left his wife Maria,  six sons and four daughters.