You are here: Home>Memories>Crime and Drama>The day Parliament burned down 1834

The day Parliament burned down 1834 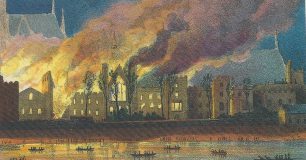 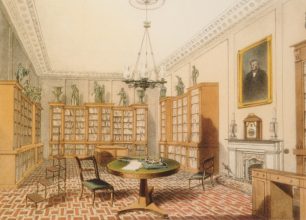 On 16 October 1834 the House of Lords and the House of Commons and many related buildings in the complex of the Palace of Westminster burned down and the flames could be seen from miles away.

The men that rescued the archives

Sir Thomas Phillipps (1792 – 1872), one of the greatest book and manuscript collectors of all time, was returning home from a party at 11 p.m. when he saw  the conflagration and drove to the spot.  He was petrified that the irreplaceable records of the Augmentation Office, the historic part of the Exchequer, were in danger as he saw manuscripts lying in the road being trampled by fireman and carts and sight seers.  Before 1858 there was no one single dedicated building for historic archives, which were generally looked after in a random way. However, Phillipps had a friend, Charles Purton Cooper,  (1793 – 1873),who was a barrister of Lincolns Inn and more importantly, Secretary of the Record Commission.  He lived at 12 Grove End Road, on the corner of Circus Road, (now the site of Grove Court) and Phillipps raced there in his carriage and turned Cooper out of bed and they both rushed back to Westminster.

By then the scene was even worse; manuscripts had been hurled out of windows to avoid the fire so that all their leaves were scattered on the ground. Phillipps and Cooper employed soldiers to collect as many as possible, while frantically picking them up themselves, and were suspected by some passers-by of being thieves, so that they had to issue a denial to the newspapers. But they managed to save a large number and the whole experience later led to the establishment of the Public Record Office and the National Archives. When Cooper died he left Lincoln Inn his vast collection of legal books.

(with thanks to Caroline Shenton, author of The Day Parliament Burnt Down, who mentioned Phillipps and Cooper in a lecture to Regents Park Decorative and Fine Arts Society)