The Great Train Robbery and the A6 murder 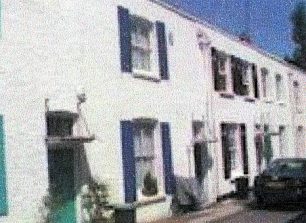 Roy James (the Weasel) (1936 – 97) was the carriage uncoupler and getaway driver of the Great Train Robbers gang in 1963 and used 14 Ryders Terrace as a hideout when he was on the run from the police in the weeks after the robbery. He was finally tracked down and made a dashing but futile attempt to escape across the roof  tops.

James was a silversmith and successful Formula 2 racing driver but had a secret life as a getaway driver in robberies, claiming that he had turned to crime because he was unable to get sponsorship money to enable him to be a Formula One driver.  When he was 28 he was involved in the £2.6 million train robbery near Leighton Buzzard in Bedfordshire.  After his arrest and trial he received a 30 year sentence but was released in 1976. Ronnie Biggs, another train robber, said I didn’t know him before the robbery but we spent time in prison together and he was great company. In 1993 he shot and wounded his father-in- law and partially strangled his wife and was sentenced to 6 years but was released and died in 1996 aged 61 after a triple bypass.

James Hanratty was hanged in 1962 at the age of 25 for the murder by shooting of Michael Gregsten in 1961. Michael Gregsten and Valerie Storrie had been kidnapped by an unknown man with a gun and forced to drive round the country until at some point Michael was murdered and Valerie left for dead.

Eight days  later James Hanratty ,  a petty criminal with mental problems but no history of violence, using the alias J. Ryan, left the home of his friend  Charles Dixie France, in Boundary Road N.W.8 and walked to Burtol the cleaners in the arcade that then existed at Swiss Cottage station, to pick up a suit and a coat that had been mended. At the same time the widowed Mrs Gregsten was visiting her brother in law Mr Ewer who owned an antique shop in the arcade; she suddenly pointed to a man walking into the cleaners two yards away and said that he fitted the police description and she had an overpowering feeling that he was the murderer. The next day Mr Ewer saw the same man go into a florists in Finchley Road and phoned Scotland Yard who interviewed the florist. She said a man had come in to send some roses to his mother, Mrs Hanratty of Kingsbury.

After many involved investigations, Hanratty was put on trial and found guilty of the murder of Gregsten.  Paul Foot led a campaign to prove Hanratty’s innocence, but in 2002 DNA evidence  seemed to prove that Hanratty had been the attacker of Valerie Storie and had murdered Michael Gregsten.