You are here: Home>Memories>Crime and Drama>Life in St John's Wood 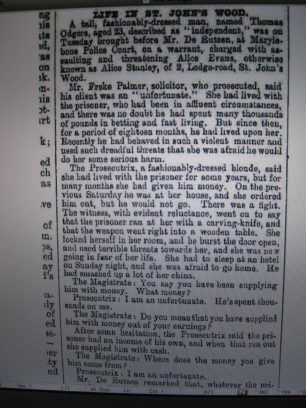 This is a transcript of the article in the above newspaper:-

Mr Freke Palmer, solicitor,  who prosecuted,   said his  client  was an “unfortunate”.  She had lived with the  prisoner. who  had been in affluent  circumstances. And  there was no doubt  he had spent many thousands of pounds in betting and fast living.  But  since then. for a period of eighteen  months,  he had lived upon her. Recently he had behaved in such a violent  manner and used  such dreadful  threats that she was afraid  he would do  her some serious harm.

The Prosecutrix,  a fashionably-dressed   blonde,  said she  had lived with the prisoner for some years,   but for many  months she had given him money. On the previous Saturday he was at her house,  and she ordered him  out,  but  he would not  go.   There was a fight. The witness,  with  evident  reluctance,  went  on to say that  the prisoner ran at her with a carving-knife,   and that the weapon  went  right into a wooden  table. She locked  herself in her room, and he burst the door open, and  used terrible threats towards her, and she was now going  in fear of her life.  She had to sleep at an  hotel on Sunday night,  and she was afraid to go home.  He had  smashed up a lot of her china.

The Magistrate: You say you have been supplying him with money.  What money?  Prosecutrix : I am an unfortunate.  He’s spent thousands  on me.

The Magistrate : Do you mean that you have supplied him with money out of your earnings?

After some hesitation, the Prosecutrix said the prisoner had an income of his own,  and when  that ran out she  supplied him with  cash.

The Magistrate:  Where does the money you give him  come from?

Prosecutrix: I am an unfortunate.

Mr De Rutzen  remarked  that,  whatever  the prisoner’s position  might  have  been,  since he had come to the end of his money he had  lived  on the  earnings  of this  unfortunate prosecutrix.  In his opinion a man could  not possibly sink much  lower.  He ordered  the prisoner  to be bound  over in his own recognisances   in £40, and to find two sureties in £20 each,  to keep  the peace for six months, or, in default,  one month’s imprisonment.