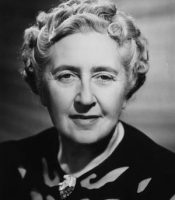 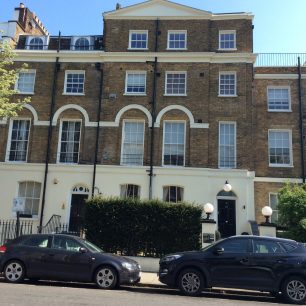 Agatha Miller was born in 1890 into a wealthy family in Torquay, Devon. She received a home education and was a voracious reader. Her own first short stories illustrated her interest in spiritualism and the paranormal, and her first novel was set in Cairo. None of these were accepted by publishers.

Just before WW1 she met Archibald Christie (1889-1962), the son of  a judge in the Indian Civil Service. He was an army officer who was seconded to the Royal Flying Corps in 1913, and they were married on Christmas Eve 1914.  Archie was sent to France and rising through the ranks he was eventually stationed back to Britain in 1918 as a colonel in the Air Ministry.  Agatha joined the VAD, attending wounded soldiers at a hospital in Torquay.

In 1918 Agatha and Archie Christie moved into their first house –  5 Northwick Terrace in St John’s Wood and a year later her daughter, Rosalind was born.   (A no 5  exists but is in a part of the Terrace which was destroyed by a bomb in WW2 and is therefore a newer building. The photo above shows no’s 9 and 10 which escaped the bombing and  which still exist. No 5 would have looked like one of these.)

Dame Agatha, as she later became,  is famous for her 66 detective novels, many featuring detectives Hercule Poirot or Miss Marple.  She also wrote 14 short story collections and a number of plays,  “The Mousetrap” being the most famous, which opened in London’s West End in 1952 and  still showing in London in 2018.

She divorced in 1928 and then went on to marry and become Lady Mallowan, living mainly in Devon where she had been born.