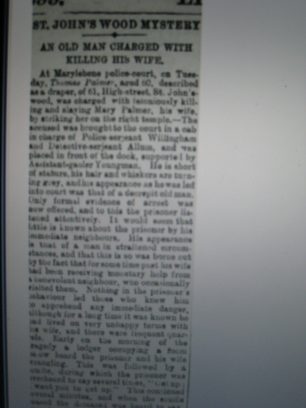 This is a transcript of an article which appeared in Lloyd’s Weekly Newspaper on 30 April 1899.The incident took place in a house in what  is now St John’s Wood High Street but at that time it was part of what was called Portland Town. This was described by Walpole as being ’ inhabited by persons of the lowest description’. The High Street was composed of mainly small houses which were pulled down when the area was redeveloped at the beginning of the twentieth century.

At Marylebone police-court, on Tuesday, Thomas Palmer, aged 60, described as a draper, of 61, High-street, St John’s-wood, was charged with intentionally killing and slaying Mary Palmer, his wife, by striking her on the right temple.   The accused was brought to the court in a cab in charge of Police-sergeant Willingham and Detective-serjeant Allum and was placed in front of the dock, supported by Assisant-gaoler, Youngman  .  He is short of stature, his hair and whiskers are  turning grey, and his appearances as he was led into court was that of a decrepit old man.  Only formal evidence of arrest  was now offered, and to this the prisoner listened attentively.  It would seem that little is known about the prisoner by his immediate neighbours.  His appearance is that of a man in straitened circumstances, and that this so is borne out by the fact that for some time past his wife had been receiving monetary help from a benevolent neighbour, who occasionally visited them.  Nothing in the prisoner’s behaviour led those who knew him to apprehend any immediate danger, although for a long time it was known he had lived on very unhappy terms with his wife, and there were frequent quarrels.  Early on the morning of the tragedy a lodger, occupying a room below  heard the prisoner and his wife   wrangling. This was followed by a scuffle, during which the prisoner was overheard to say several times. “Get up: I want you to get up.” This continued several minutes, and when the scuffle ceased the deceased was heard to say, moaning, “Oh, dear, don’t do it.” Then there was a rumbling noise as if the furniture was being moved abut the room, and about half-past four another lodger was heard to shout out to the prisoner, “Why don’t you leave the woman alone? If you don’t, I will  make you.” For a short time the noise ceased, but it then commenced again, and continued until past seven o’clock. Nothing further occurred to attract attention.  In the afternoon, however, Mr William Carter, a neighbour, was passing the house, and, not having seen Mrs Palmer for several days, he entered with a view of ascertaining if she was unwell.  He found the door partly barricaded, but by pushing against it he managed to effect an entrance. The room was in great disorder, the furniture was all out of place, and the fireplace had been removed.  In a sitting posture on the floor, supported by a chair, was the deceased woman, and close by was a hearth brush and the lower portion of a looking-glass.  The right side of her face, and especially the right temple and the chin, were terribly bruised and discoloured, and she appeared to have been dead some time.  The police were at once communicated with, and upon the prisoner being arrested and charged, he said ”Am I? Is it a fact?”

Sergeant Willingham, 32 S, said on Monday afternoon, in consequence of information he went to 61 High-street, Portland–town.  In a back room on the second floor he saw the prisoner in act of wrapping some knives in a cloth.  He was dressed and had his hat on.  Witness asked him what was the matter and he replied, “I’m all right”.  On entering the rooom he saw a woman in a sitting posture on the floor at the foot of a bed. Her head was resting on a chair, and he saw that she was dead.  He said to the prisoner, “What is the matter with your wife?” and he replied “She is a bit queer. she has been ill two or three days.” The witness then remarked “  But she is dead,” and the prisoner made answer, “No, only a bit queer.”  Witness at once sent for the divisional surgeon, and proceeded to examine the woman. She had a severe bruise on the top and bottom of her left eye, a small wound on her right eye and another at the right corner of her chin.  There were severe wounds on both wrists, and on the nose,  The prisoner made an attempt to leave the room, and witness asked him where he was going. He made answer, “I’m going out of this” Witness told him he had to stop there, and the prisoner replied, “Very well, I will.”  He was then taken into custody, and was conveyed to the New-street police-station.

On application of Inspector Tucker, Mr Plowman remanded the prisoner, who asked no questions.

At the inquest on Thursday the jury returned a verdict of “Wilful murder” against the husband, adding a rider to the effect that they were of opinion that the accused not responsible for his action, he being of unsound mind.