You are here: Home>Memories>Crime and Drama>The Suspicious Death at St Johns Wood 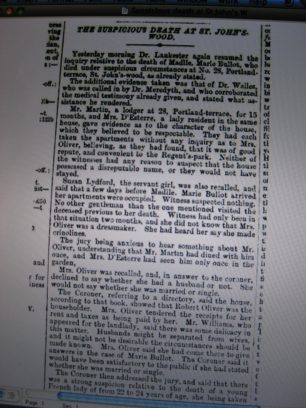 This is a transcript of a newspaper article which appeared in the Morning Post in July 1865 reporting the second day of a court case concerning the death of a young French woman living at Portland Terrace (now St Ann’s Terrace).

Yesterday morning Dr. Lankester again resumed the inquiry relative to the death of Mlle Marie Bullot, who died under suspicious circumstances at No. 28, Portland-terrace, St.John’s-wood, as already stated The additional evidence  taken was that of Dr. Waller, who was called in by Dr. Meredyth, and who corroborated the medical testimony already given, and stated what assistance he rendered.

Mr. Martin, a lodger at 28, Portland-terrace, for 15 months, and Mrs. D’Esterre, a lady resident in the same house, gave evidence as to the character of the house, which they believed to be respectable They had each taken the apartments without any inquiry as to Mrs. Oliver, believing, as they had found, that it was of good repute, and convenient to the Regent’s-park. Neither of the witnesses had any reason to suspect that the house possessed a disreputable name,  or they would not have stayed.

Susan Lydford, the servant girl, was also recalled, and said that a few days before Mlle Marie Bullot arrived her apartments were occupied. Witness suspected nothing. No other gentleman than the one mentioned visited the deceased previous to her death.  Witness had only been in that situation two months, and she did not know that Mrs Oliver was a dressmaker.  She had heard her say she made crinolines.

The jury being anxious to hear something about Mr Oliver, understanding that Mr Martin had dined with him once, and Mrs D’Esterre had seen him only once in the garden.

Mrs  Oliver was recalled, and, in answer to the coroner, declined to say whether she had a husband or not.  She would not say whether she was married or single.  The Coroner, referring to a directory, said the house, according to that book, showed that Robert Oliver was the householder. Mrs Oliver tendered the receipts for her rent and taxes as being paid by her.

Mr Williams, who appeared for the landlady, said there was some delicacy in this matter. Husbands might be separated from wives, and it might not be desirable the circumstance should be made known.  Mrs Oliver said she had come there to give answers in the case of Marie Bullot.  The Coroner said it would have been satisfactory to the public if she had stated she was married or single.

The Coroner then addressed the jury, and said that there was a strong suspicion relative to the death of a young French lady of from 22 to 24 years of age, she being takento the house where she died by a gentleman who had taken great interest in concealing his relationship to her. An abortion had been brought about on the Wednesday, and on the Saturday she died.  This gentleman, who was so much with her, might have been a party to the abortion in order to get rid of the shame to the young lady and anything attaching to him.  He (The Coroner) referred to a letter which had been received from the mother of the deceased in France, which stated that she would come to London immediately, and he therefore asked the jury if they would prefer coming to a verdict then or wait for the arrival of the mother, who probably, with a mother’s feelings and knowledge, might search out something which would be of advantage.

The jury preferred an adjournment.