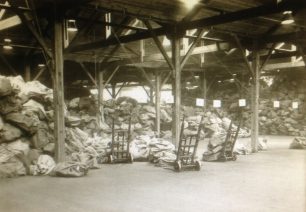 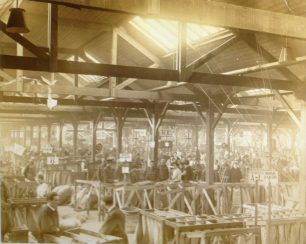 The importance of mail for troops in Flanders

Troops were living in trenches in Flanders by December 1914 and the highlight of each day then, and until the end of the war in November 1918, was the arrival of mail from England in the evening.  A Post Office base had been established by the army at Le Havre within days of the outbreak of war but by December the volume of mail had become unmanageable there.  Therefore the General Post Office (GPO) built the Home Depot, the largest wooden structure in the world, covering an area of 5 acres in Regent’s Park. In 1914, 5 million letters a week were being sent but, by 1918, 12 million items were handled every week.

Post was sent via Le Havre, Boulogne or Calais to forward post rooms close to the  front line and most reached the Front within two days, though occasionally the post arrived at locations before the Army got there. 19,000 bags of mail crossed the Channel every day, and 134 mail ships were destroyed by the enemy. Letters to sailors had to be addressed the individual sailor, with the ship’s name and London on the envelope.

The Home Depot despatched around two billion letters and 114 million parcels during the War, including the hampers ordered from Fortnum and Mason. Apart from letters, many post cards were sent, known as “war cards” and some multiple choice cards, where the soldier could tick an appropriate phrase such as “I am quite well”.

Letters were censored, either by the writer’s unit, In Regent’s Park or at the Channel Port, where 350,000 letters were dealt with each day. Censorship could be evaded however by asking a soldier going on leave to post a letter in England.

Censorship developed until it dealt with 130 languages and dialects;  censors had to decipher codes and discover invisible writing.Each examiner read on an average 110 private letters a day and the average number of letters censored in a day was 375, 517.  Three quarters of the staff were women  who were found to have a wonderful memory for detail and could recognise peculiarities in handwriting and expression.  A group to censor parcels was housed in Regent’s Park, where over 2000 parcels were examined each day.

If a soldier was killed, his relatives first received a telegram and then a letter from his battalion. For prisoners of war, reciprocal arrangements were made with the Germans.

David and Clarke Ivison of the Royal Parks Guild have identified the most likely location of the depot, which was dismantled at the end of the war, as being nine acres of land on and around Gloucester Green.