You are here: Home>Amenities>Medical>Spanish flu and St John's Wood 1918 - 20 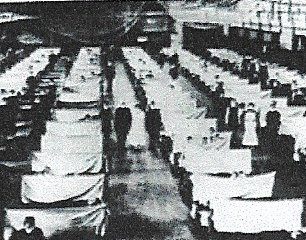 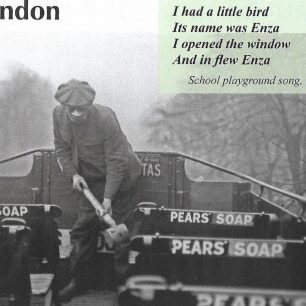 A worker with a facemask sprays a London bus with disinfectant 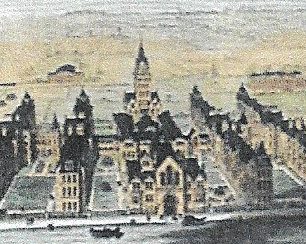 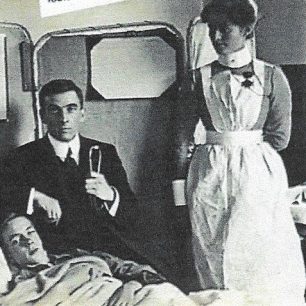 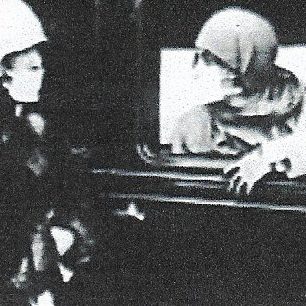 It is extremely difficult to find out how the Spanish flu epidemic affected St John’s Wood, or indeed anywhere else, as various things conspired to blot out memories:- the First War had had such a devastating effect on family life with people hardened to hearing terrible news about their relatives and it was  government policy to avoid enforced quarantining and calm down  any frightening news  in case it affected the war effort . It was thought unpatriotic to worry about flu. The Defence of the Realm Act meant that newspapers could not spread horror stories, and indeed censorship explains why the disease was christened Spanish flu, as Spain being a neutral country  without censors, the illness that was kept secret by America, England and other European countries seemed to be flourishing there. Other disasters like the Russian Revolution contributed to building a picture of worldwide catastrophe.

The first wave  in April 1918  spread rapidly. Victims were well one minute, dead the next , collapsing as their skin turned blue with heliotrope cyanosis, showing oxygen failure. Sir Arthur Newsholme (1857 – 1948) the Chief Medical Officer for Local Government  Boards  knew people should isolate  but the needs of war meant that people had to keep working.  Local Government Boards originally opposed the founding of a Ministry of Health  as public health was the responsibility of local Medical Officers  appointed by City Councils. Flu was not a notifiable disease so there was no legal requirement re quarantine .

The flu in  America was carried by troopships to France from whence  sick troops who came to England for treatment or on leave spread the disease from Channel ports to London and  then to the whole country. By July the disease was in rich areas of London like Westminster as well as poorer ones. At one point 1445 Metropolitan police were on the sick list and troops on both sides of the War were affected. This wave  lasted until August, when life seemed to be returning to normal and then September brought a  quick and violent return, signalled by the arrival of the troopship Leviathan from America with 2,000 ill men on board and 100 dead.  Prime Minister Lloyd George became ill  in Manchester  -early bulletins said he had caught a chill; later they admitted he had the flu and he travelled back to London on a ventilator.

On Armistice Day in November Lucy Malleson [1]was secretary to the newly appointed National Health Minister, and while everyone outside was celebrating there was chaos in her office as news came in of flu ravaging the country.  Conditions were unspeakable with corpses unburied  because there were not enough doctors to sign death certificates. They realised most of the doctors  must return from France as the United Kingdom needed them more than the Army did.

When this second wave of Spanish flu hit England the St Marylebone Infirmary, which was built in 1881 and had 744 beds for the sick poor, was inundated with cases of  pneumonia, including 200 patients from Paddington hospital blocking the corridors, turning  blue as their lungs collapsed. Nurses were scarce as half had been called up to care for army casualties. In the first week of December 1918 they had 779 patients with a nursing staff of under 100.

The medical superintendent, Dr Basil Hood, left a harrowing account of events there:  The staff fought like Trojans to feed the patients, scramble as best they could through the most elementary nursing and keep the delirious in bed. The patients increased and the nurses decreased, going down like ninepins themselves – sad to relate some of these gallant girls lost their lives in this never to be forgotten scourge –  and as I write I can see some of them now literally fighting to save their friends then going down and dying themselves.

He tried to make them wear lint masks but many refused for fear of distressing their sick colleagues.  Hood was so exhausted that he was forced to take sick leave in December. By February 1919  nine nurses  had died – one with terrible influenza couldn’t stay in bed and insisted on being propped up against the wall until she finally drowned in her profuse thin bold stained sputum .In all the Infirmary had 850 patients with influenza and half developed pneumonia and 197 died. An interesting postscript is that the Infirmary was allotted three more Medical Officers after his collapse and for the first time two of them were women.

At the 1919 Paris Peacemakers conference nearly everyone was ill including President Wilson and it is difficult to judge how this may have affected the peace process.  This third wave was less intense but when the pandemic ended at least 21 million people had died worldwide and of these 1/4 million were from the United Kingdom .In the years afterwards, the First War seemed to grab all the headlines and its victims were honoured in ceremonies but there are few plaques or memorials connected with the flu.  A very undramatic  Westminster Annual Report for 1919 was issued by the Medical Officer of Health :The year was marked by no particular happening as far as health was concerned. Influenza was somewhat less prevalent than in 1918 the epidemic gradually wearing itself out as the year advanced.  The mortality rates were in no instance higher than anticipated; some indeed – the infant mortality rate fell from110.5 to 98.5 – considerably lower.

In collecting personal memories for stjohnswoodmemories.org.uk we have heard only one mention of Spanish flu – Herbert Kennard of Hanover House had a sister who had died of Spanish flu before he was born.

“Whoever solves the problem of outdoor winter recreation for the mass of sedentary workers will  largely solve the problem of preventing influenza. Considering that we are actually entering upon the cold season with fewer influenza cases under treatment than is usual, there is really less ground for anxiety.  The fact is that influenza is always with us and has been for many years, but it is only at  long intervals that it becomes a serious menace to the health of the community at large. The best thing for everyone to do is to keep up general health, and bother no more about the influenza bogey. Whilst remembering unhealthy tonsils are a weak point, let us not forget defective teeth are likewise on the side of the enemy.   There is no surer way of spoiling digestion and inviting debility than by cultivating a habit of meeting troubles halfway.  It is an excellent sign of the times  that we now have a responsible authority that takes upon itself the the task of maintaining national health by keeping up national spirits. “