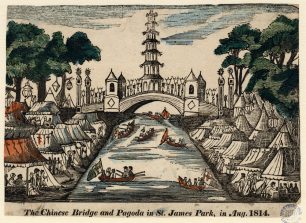 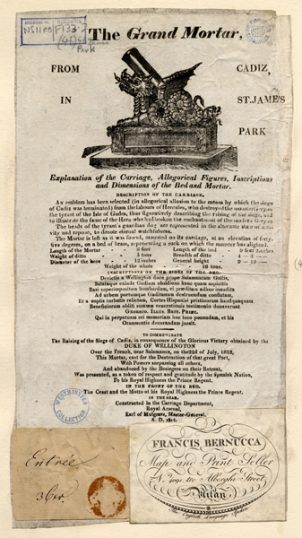 Following the victories of the Peninsular Wars, Londoners celebrated, but their merriment would be short lived, because the excesses of war had caused great economic strain on the country.

Nevertheless, in 1814, crowds took to Hyde Park to partake in more than the average day of leisure activities that occur day to day in the green space. Instead, Londoners gathered to celebrate a marvelous occasion: peace with France and the exile of Napoleon.

News came to London from Paris that a treaty had been signed on the 30th May. This treaty called for the end to the Napoleonic Wars. This was a large victory for Britain and the rest of Europe, including Prussia, while a large loss for Napoleon who was forced to relinquish his power to King Louis XVIII. Napoleon had been pushing for a larger French empire and the English were relieved to see his plans foiled.

The celebrations at Hyde Park consisted of a mock battle in The Serpentine to prove the British military might. Officials and citizens basked in the glory of an ultimate win and the forthcoming peace from the treaty. For the English, it had been a long time coming as the country had been slogged down in military campaigns for years.

However, underlying these celebrations was also a sense of fear and impending violence. Clearly, this worry was not ill placed. The passing of the Corn Laws caused social unrest and riots in Westminster. Samuel Godley and his compatriots in the 2nd Regiment of Life Guards, were put to policing London, particularly the wealthier areas of Mayfair and Belgravia – not St John’s Wood, which was then still largely an uninhabited part of the Eyre Estate.