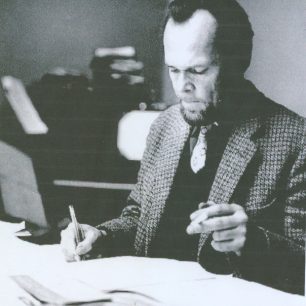 Humphrey Searle
Quadrille with a raven 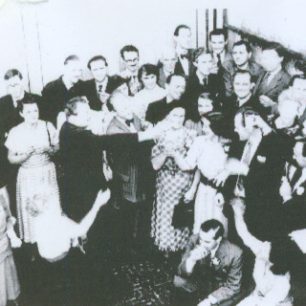 Wedding party at Ordnance Hill
Quadrille with a raven

Humphrey Searle was one of the pioneer composers of serial music in the United Kingdom. He had studied with composer John Ireland at the Royal College of Music, then with the composer Anthon Webern in Vienna and he used his position as a BBC producer in the late 1940s to promote serial music. He was secretary of the International Society for Contemporary Music from 1947- 1949.  Among many other works he wrote a Poem for 22 strings in 1950 and 5 symphonies and also composed scores for film and TV including Dr Who in 1963.

His connection with St John’s Wood came about because the BBC would not pay for a hotel room  when programmes overran and he was also having an affair with a musician and  wanted a hideaway in London; a pianist friend found a room for him in the basement of a house[later demolished]  in St Johns Wood Park in 1948.  It was spacious and had a view of a garden but was on the damp side.  In his memoirs Quadrille with a Raven he wrote  that the affair did not last.  When he suggested marriage and  found a house to buy in St John’s Wood which was empty apart from a family occupying one floor, my friend flatly refused to move in as there was no Ascot geyser. So we parted.

However he soon met Lesley Gray who luckily had a flat in the area. She had been an air raid warden in the war and the ARP had  requisitioned a small flat over the garage at 44 Ordnance Hill for her, where there was also a studio.They married in 1949  and  the wedding party , attended by Constant Lambert and Alan Rawsthorne among others, was held outside.

After the early death of his wife the actor Patrick Wymark took over the upstairs flat and Humphrey kept the studio.  The composer Malcolm Arnold said of Searle he was the greatest encourager and animator of other peoples lives and talents I have ever known. He was so modest that he forgot to promote his own great talents.