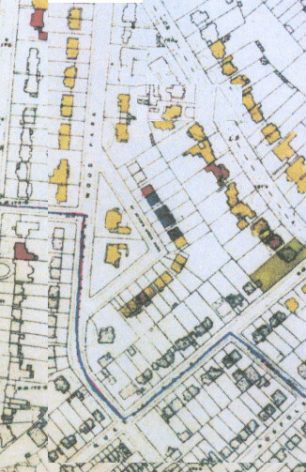 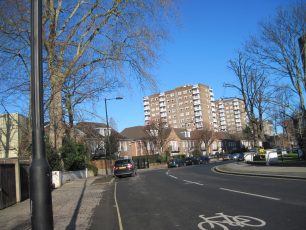 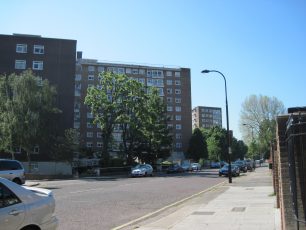 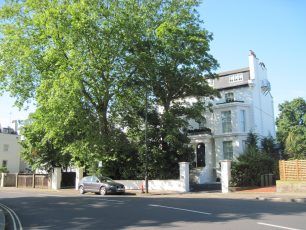 I lived in St John’s Wood Park from 1940 until the bombing that more or less obliterated it on the 19th December 1940; it was a sneak raider, and aerial torpedos and molotov cocktails were dropped. I was 9 years old and we were living in the house of Sir Russell Brain (later Lord Brain and  President of the Royal College of Physicians), my father had been his Chauffeur until war broke out, and after the war remained with him until both retired.

I remember the night so well, we were in the big kitchen, on the kitchen range Christmas Puddings were simmering away and on the sideboard in front of the windows was a big Christmas Cake iced and with eskimos and a little mirror for the iced pond. My mother, father, cousin (in the ATS), myself and my baby brother just about 2 were sitting at the kitchen table and were just going to have boiled eggs, I hit my egg with a spoon and at that moment the whole world exploded you couldn’t see a thing, glass was flying about (although we had the usual brown paper tape on the windows) there was screaming and chaos, my father got us all out into the shelter just opposite. There was a brick above ground shelter at the beginning of St John’s Wood Park , we lived opposite but the basement of our house was shored up with bolts of wood just like pit props.

The house next to us belonged to the Earl of Ossory, an Irishman, and his house was used to house Refugees from France; I had a friend about my age her name was Henrietta Richardson and she left from St Malo I think on one of the last boats and her father was in the Navy, the refugees had only arrived a day or so before and were in a terrible state of shock, one little boy was running around in the shelter just talking and talking. My mother was pregnant awaiting a baby in February (who was actually born in January), my teeth would not stop chattering.  At that time my father was an Ambulance driver in London and had not yet left for duty in Marylebone, (Sir Bernard Spilsbury the pathologist’s daughter Mrs Ward – a model, was on the same team as him in Marylebone) there was water, dirt and chaos everywhere, my father went with other men to help rescue other people in the Park. I seem to remember at the end of the Park a family had come home for Christmas to have their baby christened and it was in its cot dead; my brother was lucky as he was crying and had been in his cot in the garden room at the back , it had big wooden shutters on the French windows held in place by a metal bar, the bar had crashed into the cot and he would have been killed. The next morning my father got hold of a car, collected all the food from the house – puddings still on the hob, no cake though, lanced with glass, and we drove to my grandmother in Camden Town for a night, when we went back to collect more things. I was told to ask a friend living at the top of Ordnance Hill if she would like my toys, all I kept was a wonderful book called Vermillion by Norah Shaw which I still have, but all of my mother’s jewellery had been stolen. We then went to Kilburn for a week or so and the bombing was bad there, then my mother and father went into separate Hostels and I went to Wales to stay with the mother of Russell Brain’s parlourmaid – and that’s  another story.

I came back in about Easter 1941 and then went to New End School, I did visit there as well as Barrow Hill as I have been writing family history, I took my Grandson with me when he was about 11 and we went to photograph everywhere I was writing about and I saved St John’s Wood Park until the last

– I was so shocked when I saw it had been replaced with flats – in all those years it never dawned on me that nothing would be left.  I am so pleased to see that things are being collected, memories are so much more valuable than anything you can buy.

Nita lived with her family at No 31 St Johns Wood Park, the home of the neurologist Russell Brain (1895 – 1966), his wife Stella, sons Christopher and Michael and daughter Janet. His practice was based at 142 Harley Street for many years, and he had lived in St Johns Wood since at least 1933. James George Anson Butler, Earl of Ossory, and his wife Sybil were living at No 30 when the electoral register was compiled for Hampstead in 1939.