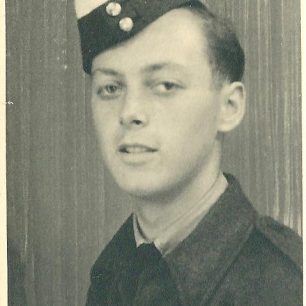 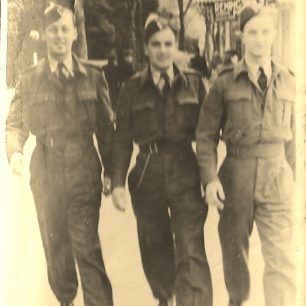 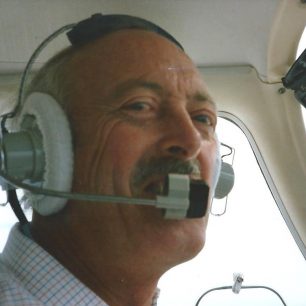 Ted Bushell volunteers for the RAF

I volunteered for the RAF in April 1943, aged 17 years 3 months, and was accepted for training as Pilot/Navigator/Bomb Aimer. I signed on and was given my service number and was placed on deferred service  in RAFVR, and eventually called to the Air Crew Reception Centre at Lord’s in June 1944 and my Flight was billeted in St. James’s Close.  We were shown our rooms, where we left our kit, but told that we would not be sleeping there, as the Flying Bombs had started appearing that week and we were required to sleep in the cellars on 3 tier ‘blitzbunks’.  At the time I did not know that the buildings were unfinished  and perhaps this accounts for the  fact that there were no doors fitted to the toilets in our building.   The V1s flew in a line from SE to NW London, which included us, and it seems strange they concentrated largely irreplaceable people in an area subject to air attack.

In one of the buildings near St James’s Close – it may have been Bentinck Close or near there, there were indoor games facilities on the first floor. One day, I and a compatriot walked along there to have a game of table tennis. Whilst in there, we heard the sound of a Flying Bomb coming towards us. On looking out of the window, I saw it flying directly towards us. As it got nearer, the engine cut out. Before flattening myself on the floor, I saw the right wing drop and it veered right and exploded on the front of St James’s Close. I am not sure if this was the bomb that landed near Winfield House killing a cadet nearby, or whether it was one that killed a WAAF officer working in an office.

We had meals in the Zoo restaurant in Regent’s Park and I cannot remember anything detrimental about them.  All I remember is , near where we sat, was a large cage, containing a large gorilla, which swung backwards and forwards, screeching. I also remember hundreds of loud cheering voices, each time an unfortunate cadet dropped his service issue ceramic mug to shatter on the concrete floor.

One morning our Corporal had us on parade, when he announced that the Air Ministry required him to select 6 of the best looking  men from our squad, to appear in a film. He duly took the names of six cadets. Mine not among them ! The boys hurriedly wrote off to tell their parents. Some days later they disappeared. On their return they told us what took place. The film was a documentary about Pilot training from our humble beginnings to Operations standard. They were told to stand in line in a mock up of Sick Quarters, wearing only trousers They were then told to drop their trousers whilst  the ‘Medical Officer walked along the front , carrying out a mock examination. The camera was being  operated behind the row. (Dear Mum, If you see the film, my bottom is third from the left !!)

We spent 6 weeks at ACRC, doing basic training, aptitude tests, medicals and selection boards. These mainly took place in the buildings at Lords.  We were told that we would be required to swim 100 yards before we moved on. The ones amongst us who were swimmers dived in and swam the required distance. The non swimmers were informed  that they would be swimming in the afternoons until  proficient. We swimmers who had showed off were told that we would spend the time we could have been swimming doing PT and Organised Games in the park !!

One of the tests was having to sit in a wooden box on the floor with legs outstretched and feet against the end of the box. The end and sides of the box were loose and slid backwards and forwards to measure the leg lengths in connection with a rudder bar.  Presumable the lucky ones with short legs were destined for Spitfires or Hurricanes and the others with long legs for large bombers. Another test entailed sitting in a gun turret with 4 imitation Browning machine guns pointing towards a screen similar to a TV (though we had never seen a TV in those days).  We were told that images of aircraft would cross the screen and we should shoot down as many of the aircraft as we could.  I was able to destroy all the ones crossing my path. When we were discussing it afterwards one or two cadets said that they deliberately failed the test so that they weren’t  graded as Air Gunner, for the life expectancy of Air Gunners was very short.  However I was of the opinion that it was to test hand and eye coordination which was essential for pilots. After 6 weeks at  ACRC, those of us who had showed Pilot potential, were issued with our flying kit and posted to Elementary Flying Schools. I and others in the same flight went to a small airfield at Winkfield, near Windsor.  It was a satellite station of Fairoaks. No 18 EFTS

This brings me to a story in connection with a comment made by one of your correspondents about the white flash in the cap attracting free beer. One evening, some of us decided to visit a  pub we had seen en route to  the field. In the pub we saw a man whom some of us recognised as Gordon Harker, a famous film actor of the time. On seeing our uniforms he asked us whether we were from the Flying School ‘ down the road’. After telling him that we were, he plied us with beer.

Unfortunately for us  the war did not last long enough for our training to complete. However, I did meet one of our intake who completed training as an Air Gunner, which was only about a 6 month course.

About 40 years later I qualified for a Private Pilot’s Licence.