3. St Johns Wood Road a quick walk round the Wood 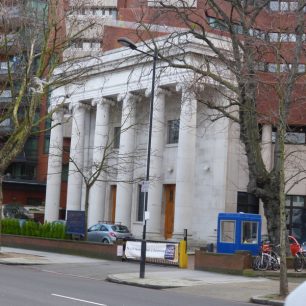 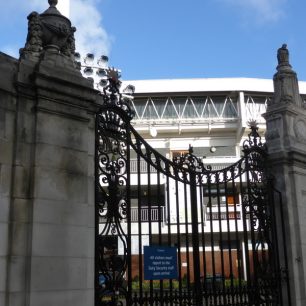 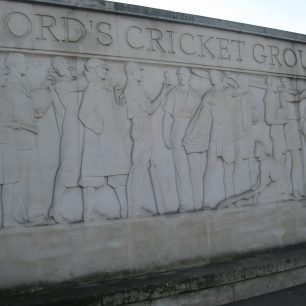 Continue past Elm Tree Road, turning left at the traffic lights at the junction with St John’s Wood Road and walk past the Lord’s Tavern to find

The ornamental gates were designed by the architect, Sir Herbert Baker  (1882- 1946) and erected in 1923 as a memorial to W.G. Grace, who was an outstanding cricketer in the 19th century.  Lord’s has been the The Home of Cricket  since 1814, and many international matches are played here, organised by the M.C.C. (Marylebone Cricket Club),  as well as those of Middlesex Cricket Club.   Within the Ground are several buildings including a Real Tennis Court, Library, Museum, and a Cricket Academy, plus events venues, including the famous Long Room. Inside the grounds there is a memorial to all the RAF recruits who began their initial training at Lords.  Tours around the Ground are available.

Across the road you will see

The Liberal Jewish Synagogue (LJS) was originally built in 1925 but was damaged by a bomb in the Second World War.  It was rebuilt in 1991, together with a beautiful sanctuary, religion school classrooms and an Ofsted recognised Nursery School – all  behind the original 1925 pillars.

Continue along St John’s Wood Road, around the perimeter of Lord’s Cricket Ground until you come to the traffic lights at the junction with Wellington Road.

Stone sculptural frieze  in bas-relief on the corner

This is entitled Lord’s Cricket Ground and  quotes Play up and play the Game.  It depicts sportsmen and women active in several sports, including cricketers, looking at the Ashes Urn. The sculptor, Gilbert Bayes  (1872-1953) is commemorated by a blue plaque at his house, 4 Greville Place, NW8.