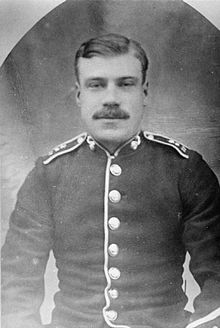 Sidney Frank Godley (1889-1957) was educated at Henry Street (Allitsen Road) School (probably what is now Barrow Hill School) in St John’s Wood. He left school at fourteen and was then employed in an ironmonger’s shop in Kilburn High Street before enlisting in December 1909.

In the army he was an able runner, footballer and cricketer.He was in the 4th Battalion, Royal Fusiliers which was stationed at Parkhurst on the Isle of Wight at the outbreak of World War 1 and was mobilised in August 1914 and disembarked in France at Le Havre on 13 August.
At Mons, Belgium, on the Mons-Condé Canal, Lieutenant Maurice Dease and Private Sidney Godley,then twenty five, were manning the machine gun after the previous crews were either killed or wounded. When Lieutenant Dease had been mortally wounded and killed, and the order to retreat was issued, Private Godley offered to defend the Nimy Railway Bridge while the rest of the section retreated.
Godley held the bridge single-handed under very heavy fire and was wounded twice. A shell fragment (“shrapnel”) entered his back when an artillery shell went off near him, and he was wounded in the head by a bullet. Despite his injuries he carried on the defence of the bridge while his comrades escaped.
He was awarded the first soldier’s VC of the war for his actions.

Private Godley took over a machine gun on Nimy Bridge when the lieutenant in charge of the section had been mortally wounded. Private Godley held the enemy from the bridge single-handed for two hours under very heavy fire and was wounded twice. His final act was to destroy the gun and throw the pieces into the canal. His gallant action covered the retreat of his comrades, but he was eventually taken prisoner.

He was treated in a German hospital and then held in a German prisoner of war camp at Doberitz. One of the other prisoners, Able Seaman Bastin, has left the following account :

One of the men at Doberitz was Private Sidney Godley, one of the first Victoria Cross winners of the war, although it was some time before we knew that he’d been awarded the honour, perhaps Christmas time. In those days the Americans weren’t in the war and information used to come to the camp through them. One Sunday a special parade was ordered and we wondered what it was for. It was announced by the American ambassador that Private Godley had been awarded a VC for his courageous work at Mons when he held up the German advance with fire from a single machine gun. And do you know what? The camp commandant actually came and shook hands with him after the award had been announced and Godley was given a staff job at the camp.
He received the actual medal from King George V at Buckingham Palace on 15 February 1919.

A Blue Plaque was installed on Nimy Railway bridge commemorating his brave action and during WW 2 it was removed and hidden for safety until after the war. Godley visited the site several times.