You are here: Home>New contributions>Katherine Mansfield and St John's Wood 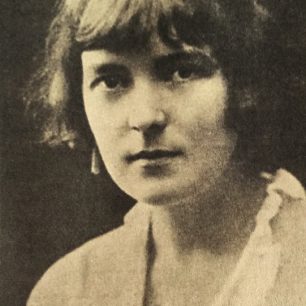 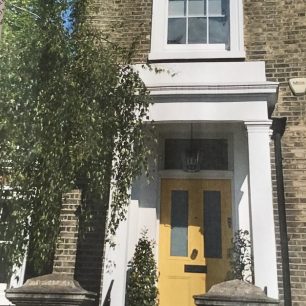 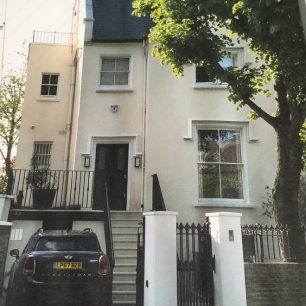 The modernist short story writer Katherine Mansfield (1888–1923), born Kathleen Mansfield Beauchamp, frequented or lived in St John’s Wood at two different periods of her life, both important to her in very different ways, and both of which fed into her creative life.

The first period occurred in the autumn/winter of 1908. Mansfield had arrived in England on 24 August 1908 from Wellington, New Zealand, where her parents had reluctantly given her permission to move to London to be a writer. On arrival she moved in, as planned, to Beauchamp Lodge, Warwick Crescent, Paddington, a hostel for unmarried women (mainly music students). One of her first port of calls was to see the musically gifted Trowell family, also from Wellington, whose father, Thomas Trowell, had been her cello teacher in New Zealand. A couple of years earlier, the Trowell twins Arnold (born Thomas), and Garnet had won scholarships to study at the conservatoire in Brussels, but were now living in London with the rest of their family (who had emigrated from New Zealand to be with the twins), at the family’s large, grey house at 52 Carlton Hill, St John’s Wood.

Mansfield, having believed her teenage self to be in love with Arnold for several years, soon realised that although the family welcomed her into their home, her affections for him were most definitely not being reciprocated. She therefore judiciously turned her devotion to his twin brother Garnet instead, who was receptive to such attention, and soon Mansfield was spending far more time with the Trowells than at Beauchamp Lodge. Her feelings were now, finally, being returned and passionate love letters were exchanged during Garnet’s frequent absences as a travelling musician with the Moody Manners Opera Company. For her twentieth birthday on 14 October, Garnet sent her a little ring, and the two believed themselves to be secretly engaged. Towards the end of November she left Beauchamp Lodge in order to become the Trowells’ lodger, thus providing them with much needed additional income, and herself with ever closer proximity to Garnet, which inevitably led to a sexual relationship; by early 1909 she had become pregnant by him.

We know very little about Mansfield’s life at this time – and indeed for the next couple of years. She systematically destroyed virtually all her letters and diaries from this troubled period in her life. Nevertheless, certain facts can be discerned. In early 1909, the twins’ younger sister Dolly, discovered Mansfield and Garnet had been sleeping together, that Mansfield was pregnant, and told her parents. Mansfield was rejected by both Garnet and his father Thomas, the latter fearing the shame her pregnancy would bring on the family, given the importance and influence of her businessman father Harold Beauchamp back in New Zealand. In despair, and solely to seek legitimacy for her unborn child, she married George Bowden on 2 March 1909, at Paddington Register Office, a singing teacher whom she had recently met at a soirée where she had performed, and who she had known for less than three months. Her calculated mission to provide legitimacy for her unborn child accomplished, she left Bowden the next day, the marriage unconsummated, and followed Garnet to Glasgow and Liverpool from 10–28 March (the pair having recently been reconciled), where he was on tour with the Moody Manners Opera Company. There were two main singers in the company – Fanny Moody and Charles Manners – who toured the British Isles, with their orchestra, other principals, players and chorus. For a short time Mansfield, who had a fine singing voice, was a member of the chorus. Many years later she would regale writer friends, including Virginia Woolf, with tales of her life on the road with the company.

During the trip, however, Garnet’s mother sent him the newspaper notice of Mansfield’s marriage and, in complete disbelief at her duplicity, he once more rejected her. On 29 April she travelled alone to Brussels and remained there for several days. No clues exist as to the reason for this trip; it is certainly possible she may have tried to obtain an abortion, but subsequently either could not, or had a change of heart. On 27 May Mansfield’s mother Annie Beauchamp, who having heard of the marriage had immediately travelled to London from New Zealand, met with both her daughter and George Bowden. Bowden, who had found incriminating epistolary evidence in his flat of Mansfield’s apparent bisexuality, presented this to Annie Beauchamp. In horror she accompanied Mansfield to Bad Wörishofen, in Bavaria, in order for her to undertake a water cure – which at the time was deemed to ‘cure’ homosexuality, arriving in early June. There is no evidence to suggest that she knew Mansfield was pregnant, and Bowden would certainly not have known. Annie Beauchamp returned to London a few days later and was back in Wellington on 13 August, whereupon she cut her wayward daughter out of her will, a fact which Mansfield only discovered following her mother’s death on 8 August 1918. In late June, alone, in Germany, Mansfield miscarried her baby.

As Jeffrey Meyers, one of Mansfield’s biographers, notes:

Katherine’s complete emotional and physical commitment to her first lover at the most vulnerable moment of her life, when her parents were 12,000 miles away and she could not confide in any adult, suggests that Garnet’s betrayal and Thomas’s condemnation had a profound effect. She was horribly shocked and permanently wounded by the rejection of her love, and this experience helps to explain why she became hard, tough, defensive and embittered.[1]

Arnold Trowell went on to fulfil his promise of a successful musical career as a cellist and composer; Garnet on the other hand passed into obscurity. He eventually travelled as a musician to South Africa, where he married a Canadian woman, Marian Smith, in 1923, and subsequently moved to Canada in 1929. He never discussed his early relationship with Mansfield with any member of his family, but significantly kept all her letters to him until his death from cancer in 1947.

In June 1915, Mansfield and her partner, the critic John Middleton Murry, took out a lease on their first proper house together, at 5 Acacia Road, St John’s Wood, a large white-stuccoed house on three floors, with a garden at the back in which stood a beautiful pear tree. In early February 1915, Mansfield’s younger brother, Leslie Beauchamp, who had enlisted as a soldier in New Zealand following the declaration of war, had arrived in England for military training. The siblings, who had always been particularly close, met as often as they could, spending much of their time reminiscing about their childhood. Indeed, Leslie spent his final leave with Mansfield and Murry at Acacia Road, before being transported to the Front on 22 September. It was, therefore, one of the greatest upsets of Mansfield’s life when, on 11 October, she received the news that Leslie, aged just 21, had been killed at Ploegsteert Wood, near Armentières, on the Franco-Belgian border  on 7 October 1915, blown to pieces by his own hand grenade during a military training exercise. By mid-November 1915, unable to cope with the memories of living in a house in London where her brother had been such a recent visitor, Mansfield set off for France. As she said in a letter to her Russian friend, S. S. Koteliansky (known as Kot), on 19 November 1915, ‘Acacia Road and all that it implied is over – for ever’.[2]

After Mansfield and Murry left 5 Acacia Road, it was let to a Russian journalist, Michael Farbman and his wife Sonia, on the suggestion of Kot, fully furnished, for seven pounds and ten shillings per month. Kot rented a room from the Farbmans and eventually became the owner of the house, living there until his death in 1955. In the same letter as above, Mansfield continued:

I left one of my brother’s caps in a drawer upstairs in his room. Would you get it and keep it safely for me – Also, I meant to give you for your room the fur rug in my sitting room – you know the one. I don’t want the Farbmans’ [sic] to use it – and I do want you to keep it for me. Put it on your bed. It is so warm and it looks and feels so lovely.[3]

Kot chose as his bedroom the room which used to be Mansfield’s bedroom. As Galya Diment notes in her biography of Kot:

Her blanket was on his bed; her chair was at his desk in the study; ‘a little blue-green bowl’ she once gave him occupied a place of honour on a small table in a sitting room. After Mansfield’s death, her carved walking stick, which she bequeathed him because he liked it so much, found its special niche as well.[4]

Later on in her life, in letters to friends, Mansfield would recall these two periods of her life. For example, in a letter written on 13 December 1921 to her friend, the artist Dorothy Brett, she reminisced about both houses:

What a pity it is you cant get a house in St John’s Wood. I think it is the one darling part of London – And I am always seeing such houses advertised on the back pages of the Sunday Times and the Observer. They sound ideal. Don’t you prefer it to Hampstead? It has a charm . . But perhaps that is because I lived there in Carlton Hill for a long time when I was young and very very happy. I used to walk about there at night – late – walking and talking on nights in spring with two brothers. Our house had a real garden, too, with trees and all the rooms were good – the top rooms lovely. But its all the musical people who make St Johns Wood so delightful – those grunting cellos, those flying fiddles and the wakeful pianos. Its like a certain part of Brussels. And then the house at 5 Acacia Road. It has memories – but its not only precious because of them. It was a charming house.[5] [all sic]

Different indeed is the close to the Sunday dinner. It has never been known to come to a decided finish, but it dies down and dwindles and fades away like a village glee singing Handel’s ‘Largo,’ until finally it drops into sofas and chairs and creeps to box-ottomans and beds, with illustrated magazines, digesting itself asleep until tea time. The Society for the Cultivation of Cannibalism waxes most fat and kicks hardest (strictly under the table) in Chelsea, in St John’s Wood, in certain select squares, and (God help them) gardens. Its members are legion, for there is no city in this narrow world which contains so vast a number of artists as London.[6]

In ‘Bliss’ (1918), Mansfield brings to life the pear tree in the garden of 5 Acacia Road, in one of her most celebrated stories:

The windows of the drawing-room opened on to a balcony overlooking the garden. At the far end, against the wall, there was a tall, slender pear tree in fullest, richest bloom; it stood perfect, as though becalmed against the jade-green sky.[7]

In the story, the protagonist Bertha Young experiences two epiphanic moments: firstly, in

a sexually charged moment looking at the pear tree with the enigmatic Pearl Fulton, and at the end of the story, when Bertha sees her own husband share a furtive moment of affection with the same character. The story concludes with Bertha exclaiming: ‘Oh what is going to

happen now?’ as Mansfield reintroduces for the last time the image of the pear tree, which was ‘as lovely as ever and as full of flower and as still’.[8] The implication is that once these impermanent moments of ‘bliss’ have passed, the tree will go on existing, flowering, in all its beauty.

As can be seen, although the periods of her life spent in St John’s Wood were not extensive, they nevertheless marked important – and life-changing – moments in her short life.