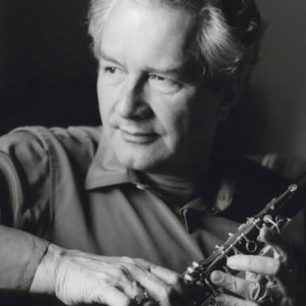 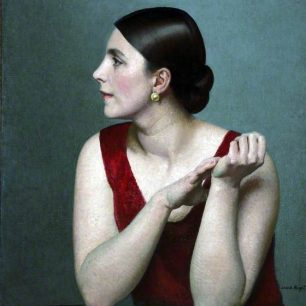 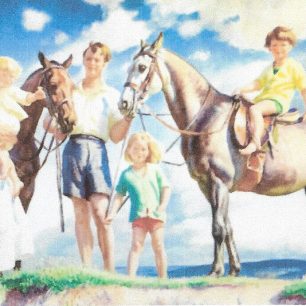 Mr and Mrs de Peyer with Gervase, Deidre and Adrian by Laura Knight 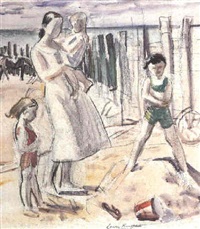 Beside the breakwater Laura Knight 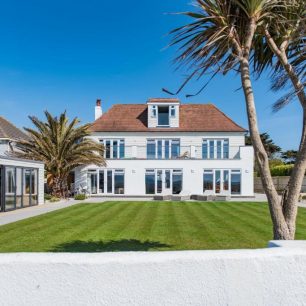 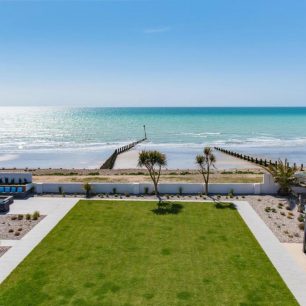 The view from Sunhouse Middleton on Sea 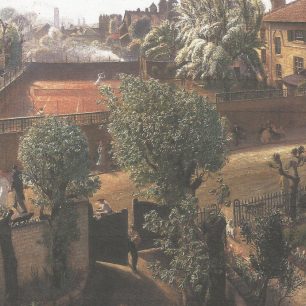 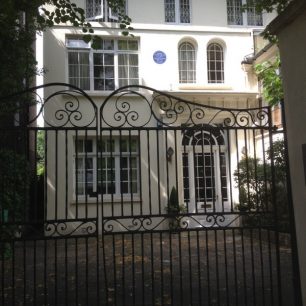 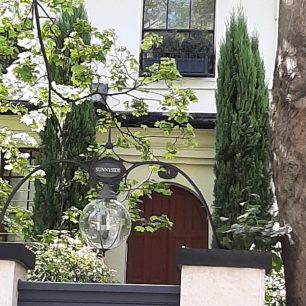 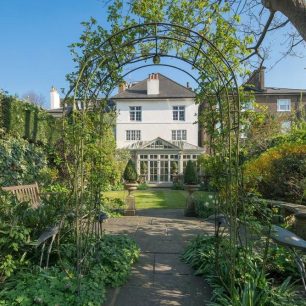 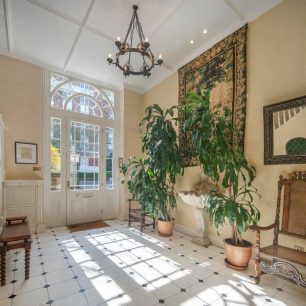 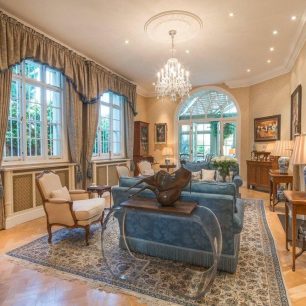 The sitting room at no 16 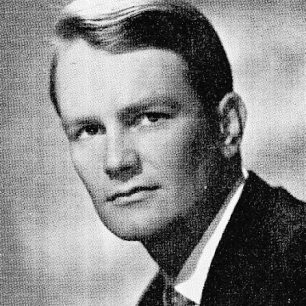 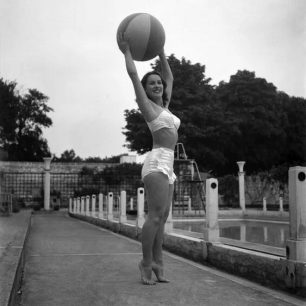 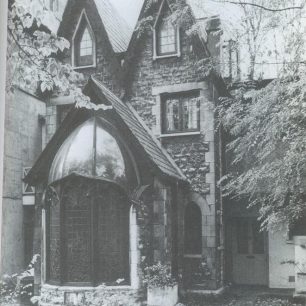 The house next door

was one of the foremost  clarinettists  of his generation, with a flair for playing from memory.  He was principal clarinettist of the London Symphony Orchestra from 1956 – 1973, a founding member of the Melos ensemble, a member of the London Mozart players and a player in the United States for twenty years, and also a conductor.  He was educated at Bedales  and aged 16 broadcast a Mozart concerto on the BBC.  He then went to  the Royal College of Music, and was studying piano there when he was called up for National Service in 1946 .  He joined the Royal Marine Band where he learned to love the clarinet. He then  resumed studies at the RCM and also went to Paris for further teaching.

His grandfather Everard Charles Peyer (1852- )was one of three brothers, sons of Swiss born Charles Peyer, and in 1875  they were all “commercial clerks” and played chess with the Endeavour Chess Club in Brixton. By 1890 Everard was an Auctioneer in the firm of Peyer and Miles, but by 1902 he was also a Fellow of the Chartered Accountants Institute with an office in Adelaide Street in the City of London, and seemingly on the way to making a fortune.  In the 1901 census he was married with 2 daughters aged 7 and 5 and a son (Everard) Esme  aged one,  a cook, parlour maid and governess, living in Kidbrooke.  Ten years later Esme was at boarding school in Cheltenham and in the First World War was a Lieutenant  in the Royal Engineers. He was a musician – a singer – and married mezzo soprano Edith Bartlett at St Georges Hanover Square in 1924.  In 1925 Everard Peyer  senior died in France, leaving £210,000.

Gervase’s mother,  Edith Bartlett (1898 – 1970) was a gifted soprano who won a scholarship to the Royal Academy of Music in 1915,  at the same time as her slightly older sister Ethel  won a scholarship there to study as a pianist, where she became an outstanding collaborative pianist..  Edith and Ethel both graduated in 1919 and appeared together at Wigmore Hall in 1921.  In that year Ethel married pianist Rae Robertson and for a while they stayed as soloists and teachers until in 1924 they  first played together at Wigmore Hall, starting a famous partnership.

Esme and Edith (now surnamed de Peyer) were living at 11 Marlborough Place in St Johns Wood in 1926 when Gervase was born but soon moved to  80 Fitzjohns Avenue in Hampstead and had two more children – Deidre ( 1928-2008  ) and Adrian (1929-2020), all looked after by staff that included Miss Bullen, the children’s nurse/governess, a nursemaid and a chauffeur, who often drove the nursery party to Regents Park as Fitzjohns Avenue was too steep for a pram – not that Miss Bullen would push the pram even if the path was level, as that was the nursery maid’s job.   Although Gervase later said that his mother lost her voice due to bad training and barely spoke at all during his childhood. Edith and Everard Esme carried on with their singing.  On 10 November 1931 for example, the BBC North Regional Programme Midday concert from the Houldsworth Hall, Manchester,  featured  Edith Bartlett (mezzo soprano)  and Everard de Peyer (baritone).

By her late teens, Ethel Bartlett’s striking beauty caught the attention of family friends Laura and Harold Knight, artists who had married in 1903 and become the central figures in the artists colony, Newlyn, in Cornwall. They both sketched and painted Ethel many times in the next twenty years, and Laura also painted the de Peyer family many times, often at Middleton on Sea where they spent holidays at their delightful house, Sun House.   In 1929 Laura was created a Dame and in 1936 became the first woman elected to the Royal Academy since 1769. In the early 1930s the Knights came to live in a rented house in Langford Place  from where she painted Spring in St John’s Wood  in 1933. but in 1937 they purchased 12, 14 and 16 Langford Place  for £8,000, living in 16 themselves.

They had a music room and as Laura wrote in her autobiography,  ‘we hired two Bechstein grand pianos, at pro’s price, and many were the rehearsals and performances given there by beginners and stars of the musical world“.  The Knights  were among the first to hear Ethel and her husband Rae Robertson  play together.       No 12 was described by Igor Kennaway,  opera conductor and teacher, whose grandparents lived there throughout his childhood.  It was where my parents held their wedding reception and the house was unique, with two studios, and strange staircases, one to the right of the front door, all wood, of which every step creaked when one trod on it, which for a small child, formed a strong impression. There was also a tiny staircase up to the bathroom, which had stained-glass windows seen above the front door. The front door in the photograph must have been added after my grandparents moved. Someone also misguidedly demolished part of the front wall to the pavement removing the arched doorway and thereby destroying what had been a totally secret garden. Next door lived the artist, Thea Doniach, whose brother ‘Pili’ was an architect. Thea and Pili were friends of my grandparents. John Betjeman could not have been inside the house, for it had not a whisper of anything frightening about it; quite the contrary-it was a place filled with fantasy. Laura Knight was also a personal friend of my grandmother, and we have a delightful drawing which she did and inscribed to my grandmother Sheila.

At the start of the war the de Peyers were at Middleton  but Fitzjohns Avenue seems to have been abandoned –  perhaps it was too difficult to run if staff were called up.    Deidre de Peyer became an actress  and married the actor Ferdy Mayne and had two children, and Adrian became an opera singer, appearing at Covent Garden and Scottish Opera, and married and had 4 children.  Gervase married Sylvia Southcombe in 1950 and had 3 children, Mervyn, Lorrayn and Janine. They divorced in 1971 and he married mezzo soprano Susan Daniel and when that ended in divorce  he married Katia Perret  Awbry , a dance and movement therapist, in 1980.

Gervase and his family came to live in 12 Langford Place in the 1960s, in one of the houses owned by Laura Knight who was his godmother.  Towards the end of her life Laura was cared for  by Miss Bullen,  who had looked after various families after the de Peyers grew up,  such as  children of the Cowdrays,  Sir Carol Reid and the impresario Tom Arnold, whose daughter knew her affectionately as Bunnie, but never ever knew her Christian name   -( which was revealed by the recently issued 1939 Register to have been Marjorie )- and has never forgotten being told how to eat an orange neatly with a spoon  When Laura died in 1970 the de Peyer family were given the first right of refusal  to the purchase of her property  in Langford Place ;  Esme purchased it and Gervase continued to live at No 12.  Edith de Peyer died in 1972 but Esme died a few years later at Grove End Upper Terrace in Hampstead and left £228000. Gervase  was awarded the Gold Medal of the Worshipful Company of Musicians (1948), the Charles Gros Grand Prix du Disque (1961) and the Plaque of Honour of the Academy of Arts  and the Plaque of Honour of the Academy of Arts and Sciences of America (1962),   He was made a Fellow of the Royal College of Music in 1992. After his return from America he slowed down a little, devoting more time to his hobbies of cooking and kite-flying, but his 80th birthday concert proved that his hands and lips and lungs had lost none of their expertise.