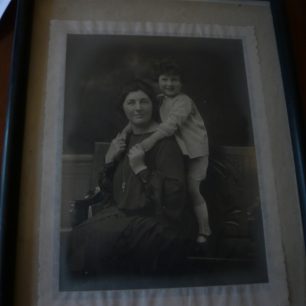 Herbert with his mother
Herbert / Louise 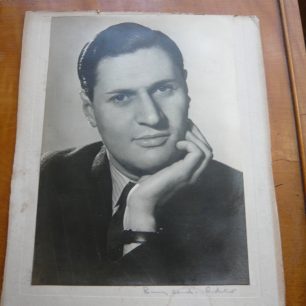 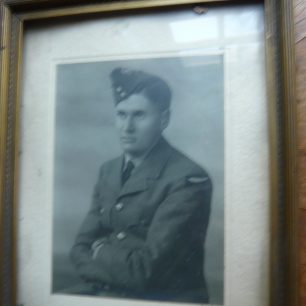 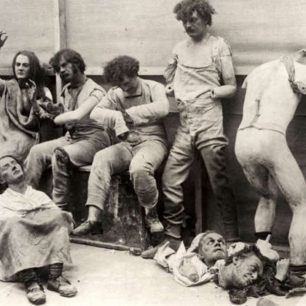 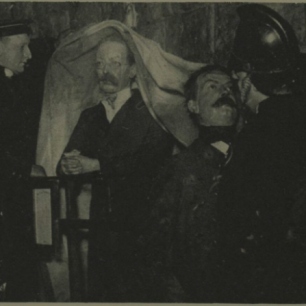 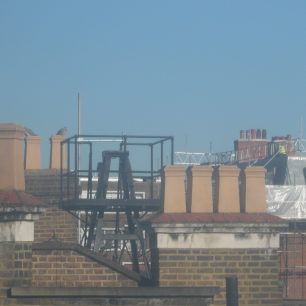 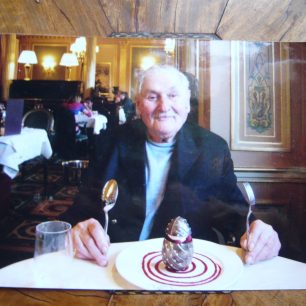 Herbert was born on Guy Fawkes day in 1919. Hanover House was ready for occupation in 1906 and his parents had moved there in 1910.  His  American father was successfully involved with imports and exports from India and Switzerland and his mother was from Germany, though both were naturalised British subjects.  He remembers his stately perambulator which had a silk awning with tassels, being wheeled by his nannies in Regent’s Park and through the tunnel in Park Crescent.  He remembers sheep coming through St John’s Wood and being driven over the bridge at the bottom of Charlbert Street to graze in the Park near the lake. He saw the blind running races holding onto a rope near St Dunstan’s which was where Winfield House is now. In Cochrane Street  there was a row of working class houses, and Herbert tells of a time when their dog went into one of the gardens. They were shouted at to go back “to their posh part of town”. There was a street behind Viceroy Court called Frederick Place, which was a real slum and Herbert was strongly prohibited from going there.

There was far, far more horse traffic then.  Carter Patterson had stables where Dora House(now demolished) was situated in St John’s Wood Road. Coal was certainly delivered by cart. When Herbert’s mother was very ill his father requested straw to be put down in what was then Lower William Street (now Greenberry Street) to lessen the noise of the horses’ hooves and the cart wheels. Sadly, she died when Herbert was only five. His sister had died in the Spanish ‘flu epidemic before he was born. Helen,  the governess who came to help with bringing him up,  stayed for 56 years and Herbert became very fond of her.

The flat had four bedrooms, originally five, with one bathroom. Herbert lived mainly in the nursery. The maids’ room was through the kitchen and Herbert was not allowed to go in there, to kitchen, larder, pantry or their bedroom unless he was accompanied by his mother, or specifically invited in by one of them. Before the war they had a cook and a maid, May and Winnie, a char-lady, governess and chauffeur.

There were two uniformed porters with caps, at each door of Hanover House, and it was also their job to bring coal up to the flat as required. This was stored in cellars at the back. Now these have been renovated as flats.    A knife-sharpener used to call round to the flats and also a man to recane the chairs.  About once a week a lady came along with a barrel organ and Herbert was given sixpence which he wrapped in a piece of paper and threw to her out of the window.  In the early evening, the gas lighter came to light the street lamps.  They had three postal deliveries a day and even one on Christmas day.  Provided the cook ordered from Selfridges (telephone MAY 1234) before 9.30 am, the food would be delivered in time to be cooked for lunch. It would come to the back door of the block, and with a system of pipes and whistles, someone in the kitchen would be alerted and the food would be raised up three floors in a basket. No tradesman was permitted to deliver his wares through the front door.

Herbert’s mother used Iddles the grocer in Circus Road or Rapsons the topnotch grocer  on the corner of St Ann’s Terrace and Circus Road.  At Iddles there were chairs at the counter and Herbert would be given a biscuit. She did not patronise Home and Colonial, and indeed would not have been seen dead there ! No way would she be seen carrying anything and purchases would be delivered by a cyclist an hour or so later.

They frequently went for tea in the West End, perhaps Fullers or Stewarts in Regent’s Street and Rumplemeyers in St James’s Street, or Gunters in Berkeley Square. Herbert would have cakes and ice cream. In March 1925  his mother took him to see the results of the catastrophic fire at Madam Tussauds – the sight of the half melted was figures gave Herbert nightmares for years afterwards. He also accompanied his mother to Bradleys, off Westbourne Grove, where she took her furs for cold storage in the summer and collected them again at the beginning of winter. They would go there in their car. Herbert remembers first a Packard, seven seater with a speaking tube for the chauffeur. It had tip-up seats in the back, and was very comfortable. Then they had a Daimler with a body designed by Mulliners, the coach builders in St James’s Street. It was maroon with a cream line around it, walnut dashboard  and nice upholstery.

When Herbert was seven or eight, he had a bad attack of mastoids on recovering from German measles. The doctor came ( he always visited when they were ill)  and called the surgeon immediately. Herbert was given chloroform for the operation on the kitchen table, which was moved to his father’s bedroom. Afterwards, Herbert went by ambulance to a nursing home in Belsize Park where they performed two more operations. Helen was his constant companion and his father gave her a gold watch as a thank you present.

He went to school at Selwyn House, in Avenue Road. They would march in a crocodile to the swimming pool in the Finchley Road, which was later built over as Woolworths, and is now Iceland.  For his secondary education Herbert went to Merchant Taylors, first of all in the City and later when it had moved out to Sandy Lodge. This meant that the chauffeur took Herbert to Baker Street for the express Metropolitan Line train, first stop Harrow. There was a ten minute walk from Sandy Lodge station.  His school clothes came from Daniel Neal or Peter Robinson. He played tennis at the club near the Midland Bank. They went abroad every summer for the whole holidays, very often to Switzerland.

When Herbert was 17, he was given a Flying Standard for his birthday and subsequently an SS Jaguar. These vehicles were kept in Charles Lane, as cars were not common when Hanover House was built, and garages were not integrated into the flats. Nearly every Sunday they would go down to the coast or to Hindhead or Ashridge Park for Sunday lunch.  Herbert had birthday parties at home with an entertainer. Sometimes they went to the theatre in the West End with a late tea at the Trocadero.  Herbert remembers Fred Astaire, (dancing with his sister Adele), John  Gielgud and Laurence Olivier. He also remembers the matinee idol, Owen Nares, who lived in St John’s Wood Park.   In about 1934 or 35, they went to the opening of the Odeon cinema Swiss Cottage with Alexander Korda and Merle Oberon who was wearing a white fox fur.

During the Second World War, Hanover House was badly damaged by a land mine which fell in St John’s cemetery over the road. It was attached to a parachute which got caught in a tree, which broke its fall. Nevertheless a wall in Herbert’s flat was destroyed and had to be rebuilt, and many of their possessions were shattered. The damage meant that whereas many blocks of flats in the area were taken over by the Air Ministry as accommodation for aircrew being trained, this did not happen to Hanover House.  There was also a barrage balloon tethered in  Lord’s cricket ground and anti-aircraft guns on the top of Primrose Hill. An air raid siren was mounted on the top of the police station, behind the flats.

Herbert remained in St John’s Wood until his death in 2021.